Patience Pays Off For Phils' Mayberry

Years in AAA and the once top prospect finally proves himself. 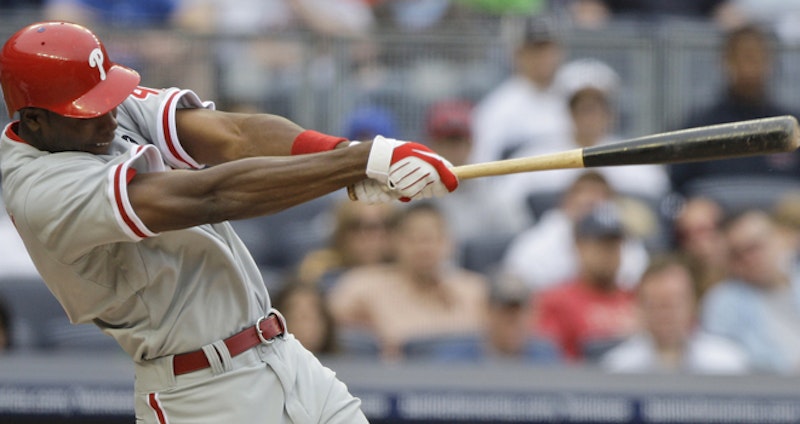 The Phillies are the undisputed kings of the National League. While General Manager Ruben Amaro Jr. has aggressively pursued high profile trades and free agent acquisitions to buoy the big league roster the team has also received huge contributions from some unlikely sources. Names like Bastardo, Worley and Mayberry are the glue that holds together Philadelphia's collection of All-Stars.

A few years ago I read Oriole Magic by Thom Loverro and was astounded by the daily contributions from everyone in the dugout required to make a team a champion. The 1983 O's had names like Stoddard, Stewart and Cruz providing clutch hits and getting big outs. An unlikely hero has emerged for the Phillies over the past five weeks.

John Mayberry Jr. was once a highly touted prospect. He was twice selected in the first round of the MLB draft. Low walk rates and high strikeout totals in the minor leagues caused Mayberry's career to stagnate in the upper minors. The Rangers dealt Mayberry to the Phillies after the 2008 season for Greg Golson.

Mayberry began the 2009 season AAA Lehigh Valley. His path to the Majors was blocked by established big leaguers Jayson Werth and Ryan Howard. Mayberry got his first taste of the bigs in 2009 when he was called up to serve as an extra bat during Inter-League play. In 57 at bats Mayberry posted a .724 OPS and four homers. He had served his purpose and was shipped back to AAA.

Mayberry found himself back in AAA in 2010. He spent the entire season in Lehigh Valley before getting a September call up. At that point Mayberry was a 26-year-old former first round pick with three seasons of AAA under his belt. In short, Mayberry was going nowhere fast.

When agent Scott Boras convinced the Nationals that giving Jayson Werth $126 million was a good idea it opened up another opportunity for Mayberry. The team desperately needed some right-handed pop to supplement left-handed hitting outfielders Raul Ibanez and Dom Brown. Mayberry finally made the Major League roster out of Spring Training this year, but that was short-lived. After sporadic at-bats for the first two months of the season Mayberry once again found himself headed back to Lehigh Valley.

Mayberry spent about a month in AAA and once again posted rather pedestrian numbers. Something must have clicked on the drive back to Philly. In the two months since his recall in July Mayberry has hammered 10 homers in a part-time role. He's also driven in 30 runs and raised his OPS nearly 200 points.

Mayberry waited patiently for his shot. He rode buses and persevered. It's very possible that Mayberry is just riding an extreme hot streak. Regardless of whether Mayberry's metamorphosis is long-lasting or just a mirage he has been a huge contributor for the Phillies. In fact, Mayberry's emergence addressed the Phillies biggest weakness. Raul Ibanez has been on a steady decline and thus far in 2011 he has a woeful .585 OPS against LHP. Mayberry on the other hand has posted a .919 OPS against southpaws and slammed six homers in just 82 at bats. Mayberry has no doubt played himself onto the Phillies playoff roster and created renewed optimism for his big league future. Patience pays off and the rich get richer.