And still no one got hurt! 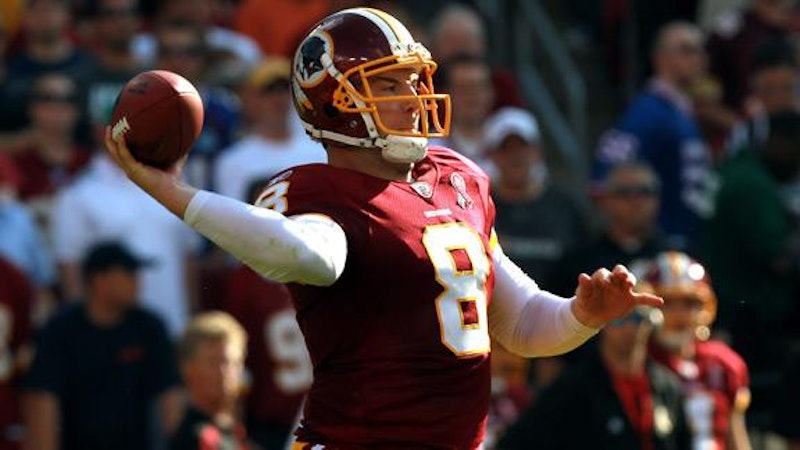 The Giants had beaten the Redskins six consecutive times. In Washington, New York, with different coaches and quarterbacks, gold or white pants, it didn’t matter. If the Redskins and Giants showed up, the Giants won. Not this Sunday. The Redskins beat the Giants 28-14 and in doing so took control of the second half in a way that Redskins fans haven’t seen in, oh, the last two decades.

Yes, the Giants are an injured group and were missing several of their best players on defense (the Redskins were missing one of their better players in safety LaRon Landry as well). The Redskins are not often a good team. They usually take their opportunities, take them to the horse track, and bet on the fat jockey.

The Redskins faced similar situations—injured team coming to your home stadium—many times over the past 20 years and mostly have failed to accept the gifts the football Gods have bestowed.

Sunday they found it in them. When Eli Manning, the quarterback who gives until it hurts his team, tried to throw an ill-advised screen pass through the hands of rookie linebacker Ryan Kerrigan. Conversely, when Redskins quarterback Rex Grossman was sacked and the Giants recovered his fumble in Redskins territory, the end result was a field goal attempt, not a touchdown dance. Even more convincingly, the field goal attempt was blocked. Who exactly are these guys in the burgundy shirts and gold pants? Not the Redskins, who are usually the victims of such behavior, not its creators.

And yet, if you’re interested in a repeat performance, the solid play of the offense and the above average play of the defense obscured what may be the unsung story line: no major injuries. The Redskins all emerged relatively unscathed, boding well for next week’s match up with Arizona.

Though you won’t see me place a penny on it, this means it’s more likely that Rex Grossman has another 300-yard/zero-interception game in him. Literally since the days of Sammy Baugh (the 1940s) the Redskins haven’t had a quarterback who has managed to stick around for longer than a few years. There has been no Peyton Manning, no Tom Brady. There hasn’t even been a productive but not Hall of Fame level 10-year starter like Matt Hasselbeck. Nobody is claiming that is about to change now that Grossman is here, but the reason quarterbacks have not stuck around long in DC is because they haven’t played very well. Sometimes that’s been the fault of lousy coaching, sometimes it’s been a bad supporting cast, sometimes the quarterback himself has lacked the ability to play well in the NFL, and often it’s been some portion of all three. Grossman may not be any kind of long-term answer, and after one game it would be foolish to make any proclamations, but simply receiving competent play from the most important position on the field would go a long way towards making the 2011 season one Redskins fans don’t try to forget as soon as it ends.

Even with all the optimism, I keep coming to this thought: Is there anything more illusory than an opening week win in the NFL? Many teams start out 1-0 and nothing comes of it.

The Redskins win over the decimated Giants is a small step. The Giants were missing many of their best players but the Redskins rallied to overcome two first half deficits, and shut the Giants out in the second half. In doing so they avoided heart palpitations from what I like to call the oh-my-God-two-seconds-left-I-can’t-believe-that-[positive/negative thing]-just-happened-I’m-going-to-run-naked-through-the-streets-and-urinate-on-the-nearest-police-car-I-find syndrome. In case it isn’t obvious, this is where two teams essentially play to a draw with the game decided by some random bounce of the ball at the last second. Good teams don’t lose many games on bad bounces at the last second because good teams don’t let many games get to that point. To the Redskins credit, when they took a big lead, they kept it. When they had the game in their grasp they didn’t let it go.

There are 16 games in an NFL season. That’s 16 games where in the team can fail, get hurt, lose, humiliated, turn on their coach. Sixteen different opportunities for failure. The Redskins have been good at seizing those opportunities and living them to the fullest. One game doesn’t change that, these are still the Redskins, but one win sure helps you forget some of it, at least for a week.