Look away while you still can. 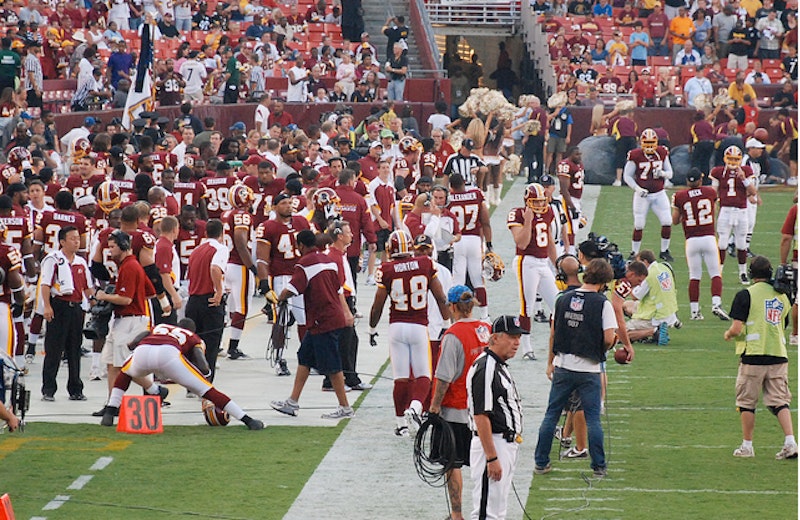 The draft picks have been vetted, feted, and signed, the free agents are bathing in money, and the coaching staff is parading around Ashburn, Virginia self-assured as ever that their particular form of genius will take the team to the top. Even the local media is staid in observance of this the most optimistic of the NFL weeks, namely the one before the first game. But as we know from reading General Helmuth Von Moltke (the Prussian Chief of Staff during the Franco Prussian war), no battle plan survives an encounter with the enemy intact. That contact is scheduled for 4:15 p.m. this Sunday, September 11, so expect things to get worse from there for the 2011 Washington Redskins.

The only certainties in a football season are injuries and more injuries. The best protection from injuries to skill players (running backs, wide receivers, quarterbacks) comes from a stout offensive line. A good line will protect the quarterback, allowing him time to throw the ball where it should go. Good throws protect the receivers from having to put their bodies at further risk by contorting to catch passes. When the offensive line becomes depleted, the quarterback has less time to throw and a higher risk of getting hurt. So too for the running back whose brains stand an increased possibility of turning into scrambled eggs.

The Redskins’ offensive line will be fine until the first injury hits, at which point the fact the team’s depth resembles that of a Britney Spears song will become clear. While the Redskins don’t have depth in any real sense, their lack of top end talent means the drop-off from starter to back up is lessened.

Take the quarterback position. Rex Grossman is the nominal starter and his skills include standing still and throwing the ball to the other team. Sure, he’s capable of running an NFL offense and will occasionally look good doing it, but as in all pro sports the key is consistency. Two 20 yard-outs in the receivers’ hands are nice but when they’re followed up by hitting the cornerback in the chest or holding the ball so long in the pocket that a ball-jarring collision becomes as inevitable as a 5-11 record they almost don’t matter. This is Rex Grossman.

His backup, the man the head coaches spent six months pimping, is John Beck. Beck has maneuverability, as in he’s played for lots of different teams. He can also move in and around the pocket better than Grossman, but his list of superlatives ends there. He doesn’t have a strong or particularly accurate arm, which would be fine if he were a sous chef, but as an NFL quarterback it’s problematic. Beck has upside but it’s upside in the same way your new cocker spaniel has upside. Just because he’s hasn’t ever shit on the bed doesn’t mean he won’t. In the end he is a cocker spaniel.

If he Redskins have one thing going for them on offense it is quantity. Not quality, quantity. Washington’s roster construction could fairly be likened to a house built by someone who loves taking a dump. It has eight bathrooms but no kitchen, living room or bedrooms. The Redskins have eight wide receivers but no back-up offensive guards. I’ll move on to defense while that sinks in.

What good news there is comes on defense, though it is relative in nature. Last year, the Redskins’ defense was beating-a-puppy-with-a-tire-iron-at-a-little-kid’s-birthday brutal. The good news is that generally defense is highly variable from year to year, so even if the team hadn’t improved the talent level there is a good chance they would improve simply by reverting to the mean. Like on offense the Redskins have some talent on defense, but that talent is certainly less than other teams in their division and is backed up by players who, if they were playing for other NFL franchises, would be working at Wal-Mart. And no back-up offensive guards!

The saving grace is the coaching staff. Not that they’re great, or even particularly good. They aren’t. They are, however, moderately competent. Head coach Mike Shanahan has won Super Bowls when he’s been given great quarterbacks and running backs to work with. His son, the offensive coordinator, has a resume highlighted by some good offenses in Houston. The defensive coordinator… and I was just getting a positive vibe. Defensive coordinator Jim Haslett has taken defenses and made them worse everywhere he’s been. That is surely the thesis statement on his resume.

The Redskins’ chances of impacting the NFL in any meaningful way this season are short. In that way the 2011 season represents more of the same from the franchise that brought you Danny Wuerffel as a starting quarterback, charging for pre-season practices, and Jim Zorn staying “medium” while his team sank to last place. This year’s Redskins team may win some games (they aren’t the 2009 Detroit Lions, though they could lose to them), but manufactured optimism aside, the end result will be more mediocrity than you’d care to watch on a weekly basis.