Joey Votto and the 15 Dwarves

Putting together the 2012 MLB All-Star Game. 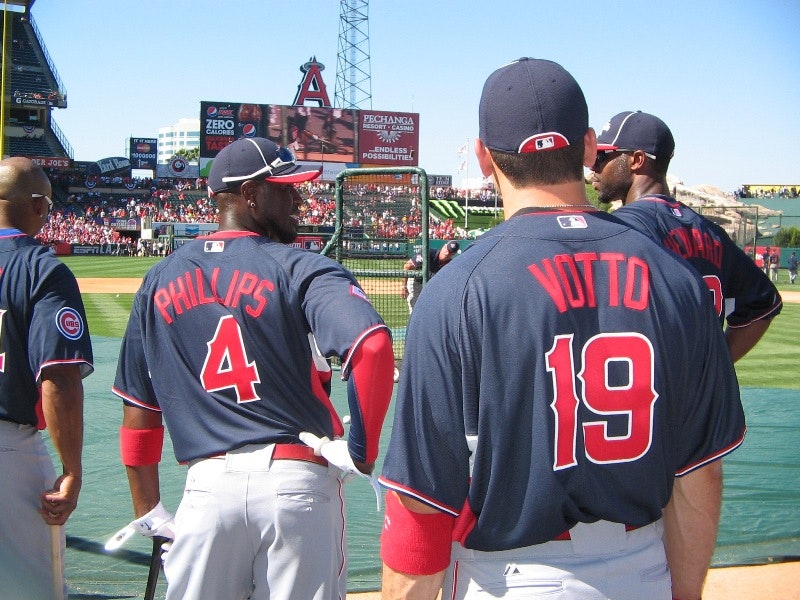 The final tallies of the MLB All-Star game voting are always controversial. Ballot stuffing, blatant homerism, and allegiance to well-aged stars typically leads to commentators complaining that the voting process should be taken away from the fans. If the game is really supposed to matter should Derek Jeter be starting over Asdrubal Cabrera or Mike Napoli over Joe Mauer? You could even argue that the fans did a better job than National League manager Tony LaRussa, who pointedly snubbed former NL Central rivals in Cincinnati and Milwaukee.

One position the voting public didn't really have a chance to screw up was starting first baseman for the National League. Reds' first sacker Joey Votto, and first half NL MVP, easily won the honor with a total of over seven million votes. The Giants first baseman, and resident disappointment, Brandon Belt finished a distant second with just under four million votes. Belt's absurd vote total, which can only be explained by unabashed ballot stuffing by San Francisco fans, gives credence to anyone critical of the current voting process. The fact is that Votto was the only real option at a position that went from a league strength to a serious weakness seemingly overnight.

Votto, 28, has emerged as the best hitter in baseball. He currently leads the National League in doubles, on base percentage, slugging percentage, and OPS. Votto would probably be the starting All-Star first baseman even if Prince Fielder, Albert Pujols, and Adrian Gonzalez were still in the senior circuit. The fact that those sluggers have all defected to the American League over the past two seasons has left a dearth of talent in the NL. Factor in Ryan Howard's injury and Todd Helton's decline and a vote for Votto was the ultimate no-brainer.

LaRussa selected the Cubs’ Bryan LaHair to serve as the reserve first baseman for his squad. LaHair is a 29-year-old career minor leaguer getting his first chance at extended big league time with the rebuilding Cubbies. LaHair’s made the most of his opportunity: though he's cooled considerably since a torrid April, he’s a worthy selection. He's hit 14 home runs, 12 doubles, and posted an impressive .907 OPS.

Adam LaRoche has rebounded from a tough first season in Washington to emerge as a major cog in the Nationals' lineup. LaRoche was really LaRussa's only other option for a reserve spot. The veteran has bounced around since coming through the Braves' minor league system. After playing just 47 games in 2011 LaRoche has knocked in 52 runs, clubbed 15 homers, and posted an .843 OPS for the Nats. LaRoche has done much of his damage with Ryan Zimmerman, Jayson Werth, and Michael Morse out of the lineup due to injury.

Votto looks like he could be king of the hill for a long time. The Reds signed him to a 10-year contract extension earlier this season for over $200 million. LaRoche and LaHair don't pose serious threats to knock him from his All-Star perch. Ryan Howard should be fully healthy next season but he's not nearly as dynamic a player as Votto. It may take a few years, and the further development of youngsters like Chicago's Anthony Rizzo and Yonder Alonso of the Padres, to make voters think twice before casting a vote for Votto.