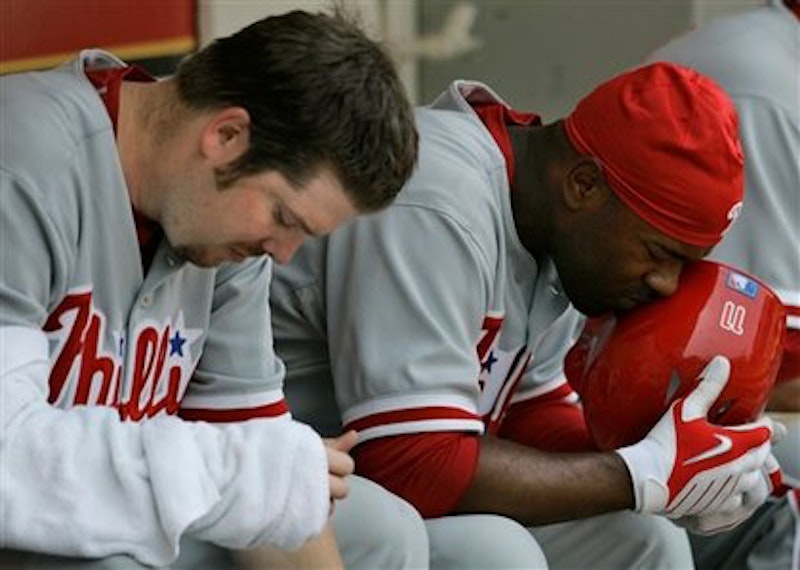 Age has caught up with the Phillies, right? All those huge contracts they handed out are finally biting back, correct? Or maybe it’s the injuries: missing Roy Halladay, Chase Utley, and Ryan Howard for such a long period of time has sealed their fate. It could also be ignorance: who really thought the Howard, Placido Polanco, Jonathan Papelbon, and Jimmy Rollins (2011 extension) contracts were smart ways to use up the club budget? It’s probably a combination of all of the above, but the reason the Phillies are falling flat doesn’t really matter. Ruben Amaro Jr., who started off his career with a few boneheaded moves, has really grown into the role General Manager and is more than capable of bringing Philadelphia back to form.

In reality, 2012 is just a pit stop for the team, a year in which they can regroup and reestablish the core players of the club. Utley, once a franchise hitter, has obviously been on the downturn for quite some time. Age has not been kind to the second baseman, who has succumbed to numerous injuries over the past three years and hasn’t played a full season since 2009. When healthy, Utley can still be productive, as evidenced by his 2011 numbers, but he can no longer be counted on as a cornerstone to the Phillies offense. Likewise, Howard has shown signs of regression since his 2006 MVP season. Don’t be mistaken, the first baseman doesn’t have chronic injuries to excuse his poor play like Utley. No, to put it simply, Howard just isn’t that great. There’s not much special about him, aside from monstrous power, which is easily dampened by the other aspects of his game. From 2010-2011, Howard combined for 3.0 fWAR. That isn’t bad, but when coupled with his price tag, it’s not difficult to see why his contract is widely considered an unmovable albatross.

But that’s what 2012 is for. Amaro Jr. will, if he’s smart, acquire a couple of potential impact bats before the trade deadline using the many chips he has to work with. Cole Hamels, Shane Victorino, and Carlos Ruiz will be highly sought after throughout July.

Hamels, perhaps the most desired player this summer, could solve Philadelphia’s third-base woes. Texas and Detroit, two of the most aggressive bidders, each have fantastic prospects at the hot corner. Mike Olt, of the Rangers, is close to major league ready. Thus far in Double-A, the 23-year-old has hit to a .302/.408/.600 line and clubbed 14 homers. Most impressive, however, is his prodigious ability to draw a walk, brandishing a 14.4 BB% this year. Nick Castellanos, of the Tigers, has more upside. The righty was recently promoted to Double-A after killing High Single-A hitting with a .405 batting average. Though he has only hit six home runs in 2012, the youngster is expected to develop major power by the time he hits the big leagues. Choosing between the two would be difficult, though it’s still speculation as to whether the prospects are truly available.

Victorino, though in the midst of a down year, will also command a big, if not huge, return in any prospective trade. Under the new CBA, the Flyin’ Hawaiian’s looming free agency is no longer a selling point for interested clubs. The acquiring team not receiving a draft pick as compensation for the player’s signing with another team diminishes his value. Still, for a contending club in the need of outfield help, Victorino is a quick fix. Carlos Ruiz, who is actually over performing, is also a name to watch. An above average catcher for the last three years, Ruiz is on pace to shatter his career best 4.4 fWAR total from 2010. The 33-year-old backstop is likely playing over his head, but catchers are always valued highly on the trade market. With an affordable club option available for 2013, Ruiz could appeal to many teams.

The Phillies aren’t the usual story of a rebuilding ball club. They’re not the Padres, Cubs, or Royals. They’re going to compete next year. 2012 is a good opportunity for the club to trim down and cut back on the excessive spending that helped tag them as the “Yankees of the National League.” With more young, impact players at their disposal next year (and perhaps a healthy Halladay, Howard, and Utley), Philadelphia will claim the top spot in the NL East once again.