But still one of the best safeties in football. 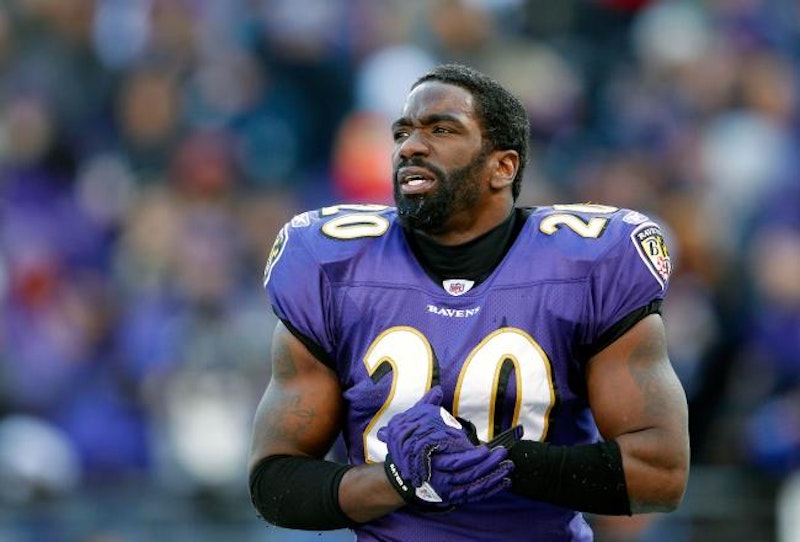 Baltimore Ravens' All Pro safety Ed Reed is a football wizard on the gridiron. He's been a dynamic force in the Baltimore secondary for nearly a decade. Reed’s been slowed by injuries in recent seasons but he always shine when the spotlight is brightest. He's a sure fire Hall of Famer and a millionaire many times over.

Reed’s a bit obtuse in his dealing with fans and the media. He's hinted at possible retirement several times in the past few years but he's always ready to pester opposing quarterbacks when the regular season starts. This offseason has been no different for Reed.

He's flip-flopped on his football future so many times since the end of last season that you'd think he were running for office. Many Ravens fans have expressed frustration with the safety with some calling for the team to release Reed. Anyone who thinks the Ravens should release Reed is seriously underestimating his on-field impact and overestimating the distraction created by his mercurial nature.

Reed is still one of the best safeties in football. He is an instant game-changer the moment he steps on the field, and is worth every penny of the $7 million the Ravens owe him for the 2012 season. The problem is that Reed is entering the last year of his contract and wants another big payday before he hangs up his cleats. The Ravens have to work out long term deals with RB Ray Rice and QB Joe Flacco before they can turn their attention to Reed.

Reed was widely criticized for skipping last month's mini camp, as if missing a few days of jogging around a synthetic field in Owings Mills in June would somehow affect Reed's ability to impact NFL games in the fall. Frankly, I don't know why any NFL veteran in the last year of his contract would show up to any mini camp. One false move could end a season, and a year's worth of paydays, before it ever starts. The NFL's incessant desire to become a year-round sport has resulted in teams holding OTAs (official team activities) on a near constant basis. It's a nice way to keep the league in the headlines but has little to do with the on field product. OTAs also give teams a chance to check up on their players every couple weeks to make sure they don't get arrested, stabbed, or pulled over while under the influence. Reed missing mini camp isn't a big deal.

No one should begrudge Reed for trying to make as much money as possible in an unforgiving sport with non-guaranteed contracts, but he’s been his own worst enemy in this process. Reed doesn't have an agent. He's serving as his own agent and doing himself a disservice. Instead of Reed's agent making cryptic statements about his client's football future, Reed is forced to make them himself. Reed doesn't have a pro to act as the bad guy or field the repetitive media questions and has let his frustrations get the better of him. While the Ravens can simply treat Reed's contract situation as a business problem Ed is making it personal. Reed has taken his disgruntled worker act to Twitter over the past few weeks with disastrous results. Verbal sparring matches in 140 characters bursts with his team and fans isn't doing anyone any good.

Ravens fans should take a deep breath and chill out. Reed will play football in 2012. Holding out of Training Camp this year may even be a benefit to Reed's long-term health. He only has so many hits left in that neck and shoulders so why waste any of them in August? After the season the Ravens can either give Reed an extension, after Flacco and Rice are signed, or tell him to take his tired act on the road.