What's Next For the Beleagured Orioles?

Hopefully they'll get their trades in order. 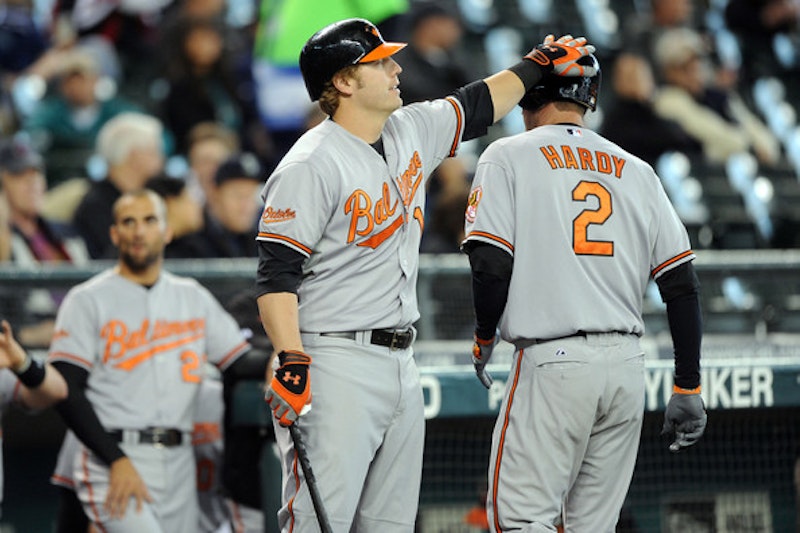 The Baltimore Orioles’ three-month run of good fortune has crashed to an abrupt end. The team plays bad defense, has battled injuries all year, and lacks dependable starting pitching. The porous defense and inconsistent pitching performances shouldn’t come as any surprise. The surprise is that the team is in second place in the American League East, six games back of the Yankees as baseball’s first half draws to a close.

The Orioles have clearly reached a crossroads in this 2012 season. The team has lost left fielder Nolan Reimold for the season due to a neck injury. Nick Markakis is still recovering from wrist surgery and won’t return to the lineup until sometime after the All-Star break. Manager Buck Showalter is starting infielders in the outfield and has replaced the hot corner with a revolving door. Pitchers Brian Matusz, Tommy Hunter, and Jake Arrieta have lost their luster and floundered at the back end of the O’s rotation. Matusz has been so bad that he was demoted to Triple-A Norfolk after Sunday’s most recent debacle in a 6-2 loss to the Indians. Hunter’s been banished to the bullpen. Arrieta will get at least one more start before the team makes a decision on his immediate future.

The Orioles took a step in the right direction with the trade for Jim Thome over the weekend. Thome won’t help the team’s woeful defense but he does provide a patient, veteran hitter for the middle of the order. The Orioles had used the designated hitter spot to rotate and rest players for much of the season. The offensive results were dismal. Thome gives the Orioles a dependable DH to provide protection for Adam Jones and Matt Wieters. The price to acquire Thome, two middling Single-A prospects, was negligible. Thome will help, but sadly he can’t pitch.

The trade gave Baltimore fans a renewed sense of optimism. GM Dan Duquette sent the message that the team wasn’t going to sit idly by and let a once promising season go down in flames. Orioles’ fans have been waiting all season for the other shoe to drop. Now that it apparently has Duquette is challenged with the task of improving the team’s starting rotation or watching a promising season go up in smoke.

The Orioles will take a look at in-house options Chris Tillman and Zach Britton before attempting to acquire a starter. Tillman has gone 7-15 with a 5.58 ERA in 36 starts over the past three seasons with the O’s. He’s put up solid numbers this season at Triple-A Norfolk with the help of pitching guru Rick Peterson. Britton was expected to be a mainstay in the Baltimore rotation after notching 11 victories as a rookie in 2011. He developed a shoulder injury prior to the season and is just rounding into form. If Tillman and Britton can’t serve as dependable complements to Jason Hammel and Wei-Yin Chen acquiring another starter may become a moot point.

The ultimate success of the 2012 Orioles was always dependent upon the performance of the club’s young pitchers. Arrieta and Matusz flopped but the club somehow remained competitive. The Orioles are a flawed team with a good record. I’d love for the Orioles to make a postseason push but any trade that sends off a bevy of promising youngsters to rent a veteran starter looks like fool’s gold at this point.

If Tillman and Britton succeed, the Orioles should look to acquire a lesser veteran like Joe Saunders or Ryan Dempster to stabilize the rotation and continue the push to October. The likes of Matt Garza, Cole Hamels, and Zack Greinke would cost several top prospects to acquire and such a move could do long-term harm to the franchise.

I was critical of Duquette prior to the season but he and Showalter have pushed all the right buttons. Now that the team has entered its first extended swoon the front office must work some magic once again.