Jeffrey Loria's a Grifter, But He's Not Ruining Baseball 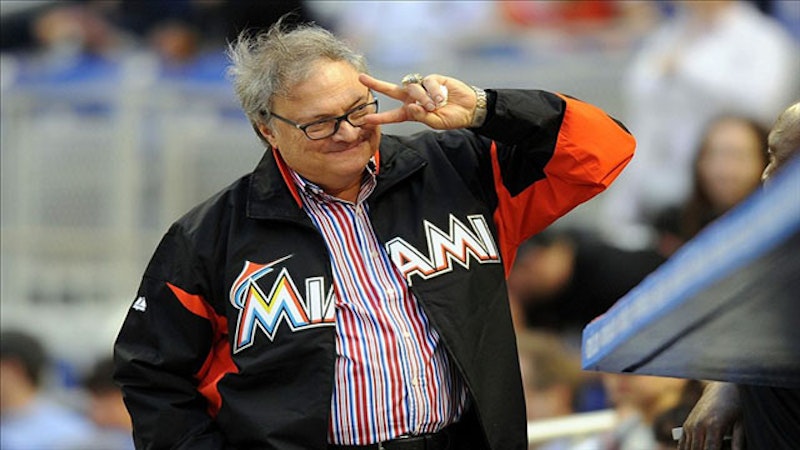 Miami Marlins owner Jeffrey Loria is a bona fide con man, but I’m gagging at all the moral indignation spewing out of every corner of the Internet since the businessman unloaded some $181 million of his team’s payroll by trading Josh Johnson, Mark Buehrle, Jose Reyes, Emilio Bonifacio and John Buck to the Toronto Blue Jays for a bunch of low-cost prospects. It’s a heist, all right, for the detested Loria, but was the transaction illegal? No. Is the blockbuster bad for Major League Baseball, aside from the hundred or so fans in Miami? No. The arbiters of MLB manners are agog at Loria’s audacious move, suggesting that Commissioner Bud Selig intercede and block the trade, as if the handsomely-compensated Selig has ever made a move that would rock his own yacht. Selig, who, along with the sports media, consciously ignored the PED scandal in the mid-90s, preferring the artificial home run contest between the juiced Mark McGwire and Sammy Sosa—anything to bring fans back after the disastrous ’94-’95 strike—is an owner’s executive. Oh, when a player makes a racial/homophobic slur, he’s quick to send the offender to sensitivity classes, but on the big money issues the man’s like the Sphinx.

Selig is guilty of far worse than allowing Loria to line his pockets at the expense of Miami (he somehow was able to persuade the local government to build him a new stadium, with public money, in Little Havana, which opened last April), which is an awful market for baseball in the first place. For example, Selig and his cohorts steadfastly refuse to allow Mark Cuban, the billionaire who owns the NBA Dallas Mavericks, to get even a sniff of purchasing an MLB franchise, even though he’s demonstrated that he’s a sports fan as well as tycoon, and could be expected to pour his own money into any team he’d buy. MLB needs more owners like Cuban, activists who actually care about sports, but to Selig the man’s an undesirable. And what about holding the Oakland A’s hostage when its ownership has attempted to move to San Jose for the past decade? Yes, the San Francisco Giants are gumming up that deal, citing the short 40-mile distance between the two cities, but Orioles owner Peter Angelos, after wrangling a sweetheart television deal, finally relented and waived his right to block the relocation of the moribund Montreal Expos to Washington, D.C.

The Wall Street Journal’s Brian Costa was more even-handed than most sportswriters in analyzing the Loria deal, arguing that however detestable Loria may be, it’s a financial windfall for the man. And sports is a business. But I think he gets the dynamic wrong when getting down to the damage it does Miami and the industry in general:

How many fans will ever allow themselves to develop any personal connection to a Marlins team that has burned them three times now? How many will bother showing up even if the team becomes competitive again one day? As it was, the Marlins averaged just 27,400 fans per home game in 2012, the lowest attendance for a first-year stadium in more than a decade… It will make the Marlins Exhibit A for cities across the country whose leaders are wary of using taxpayer money to fund new stadium construction.

Taking Costa’s last criticism first: good! Why should the residents of any city—and remember, the majority of those taxpayers don’t go to games—pay the cost of a new facility for a wealthy owner? One of the great (and legal) scams in sports in recent years was taxpayer assistance for building a new Yankee Stadium, as if that team’s owners couldn’t finance the project itself.

Second, maybe now the baseball industry will realize that Florida (whether it’s the Marlins or Tampa Bay Rays) is a lousy market for the sport. My son and I went to Marlins Stadium last June and were unimpressed, noticing a small crowd and a park that was built on the cheap, some cool psychedelic touches notwithstanding. I said back then that Loria was in for the short-term, until he could find a sucker to palm off the albatross on. As a friend of mine, who accompanied us to the game, told me, there’s too much going on in Miami for 81 home baseball games to draw any consistent interest, no matter how well the team is faring in the standings. Miami, as Tom Wolfe writes in his new novel Back to Blood (rather unfairly panned, I think), is not the Northeast, not the Midwest or even Los Angeles; it’s a weird hybrid of wealthy old men and their trophy wives, immigrants, drug dealers and South Beach poseurs. These aren’t people with the passion for baseball that’s evident in St. Louis, Chicago, New York, Boston, Philly and so on.

I couldn’t care less about the finances of Jeffrey Loria or his supposed perfidy. I do hope that both the Marlins and Rays are re-located, maybe even by Mark Cuban, whose portfolio might be more impressive to Selig in the wake of this audacious salary dump. Frankly, the only thing I’m cheesed off about is that the Blue Jays just got a lot better in the crowded A.L. East (at least short-term) and that makes it more difficult for the team I root for, the Red Sox, to get back on track.