For Redskins, A Win Makes Everything Right

It’s possible this flawed Washington could make the playoffs. 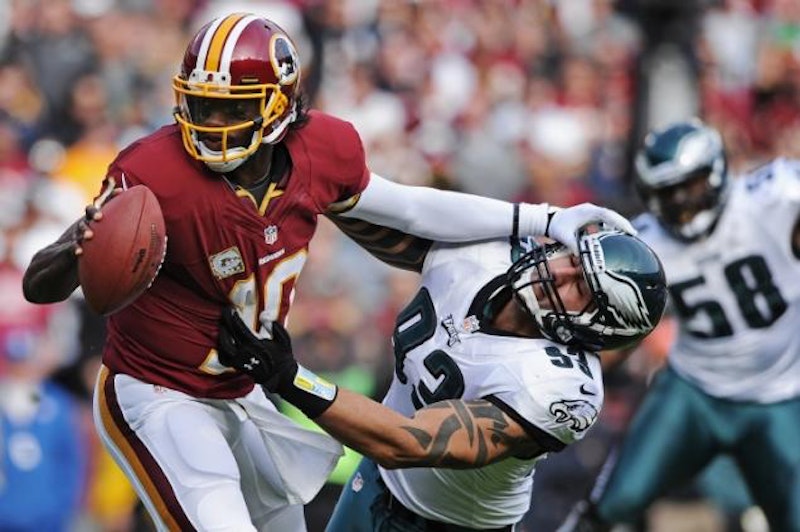 Wins in the NFL are odd. All the lousiness exhibited by the winning team is promptly forgotten, and every bit of ineptitude shown off by the losers is magnified. All a team has to do is score one more point than their opponent and instantly their every effort and strategy is validated. Such was the case on Sunday when the Redskins beat a reeling Philadelphia Eagles team, 31-6. Numerous penalties, bad throws, and a porous defense will be entirely forgotten because the Redskins got out-garbaged by the Eagles.

Talk in DC before the game was that a Redskins win would set the 3-6 DC team up for a potential run towards the playoffs. While Washington did win the game, there wasn’t a whole lot that made you think a playoff run was coming. Looking at the final score you’d think the Redskins steamrolled to victory, and they sort of did, but not in any confidence-inducing way. Washington was called for a staggering 13 penalties, a fact that maybe shouldn’t be staggering considering the Redskins are the NFL’s most penalized team. Deep passes heaved in hope happened to end up in burgundy hands.

The Redskins excelled at this: facing a really bad football team. It’s extreme to say an NFL team has given up, but the Eagles didn’t have a whole lot of fight to them. Two times a Redskins receiver caught a pass inside the Eagles’ five-yard line and was wrapped up by an Eagles defender only to break free and score a touchdown. Rookie quarterback Nick Foles looked overwhelmed, alternating decent passes with wobbly ducks to nobody or passes directly into the hands of Redskins defenders. The Eagles further helped the Redskins out by committing nine penalties of their own.

Yet, despite their mediocre defense, utterly inept competition, and constant penalties, the Redskins do still possess some chance to make a playoff run. That chance is named Robert Griffin, III. Griffin about single-handedly beat the Eagles with his accurate arm (14 of 15 for 200 yards and four touchdowns) and speedy feet (84 yards rushing). That’s good for a perfect quarterback rating of 158.3. More than once Griffin ran in circles in the backfield while Eagles players repeatedly threw themselves at his feet in vain, like some old football video game. The level of athleticism and skill that Griffin brings to each game is such that the Redskins have a chance against any opponent provided the rest of Washington’s team shows up.

The Redskins ran into the opposite of a juggernaut on Sunday, an opponent who wouldn’t accept anything other than a loss. So, while the remainder of Washington’s schedule isn’t exactly difficult, the team will have to play better and smarter to make anything of what is left of the season. And with Griffin at the helm, it is possible to make an argument that the Redskins have a chance in the mediocre NFC East division. The New York Giants lead the division by two games over Washington, but face a tough remaining schedule highlighted by games against Atlanta (9-1), Baltimore (7-2), and Green Bay (7-3). The eminently beatable Dallas Cowboys are one game up on Washington thanks to eking out an overtime win against a bad Cleveland Browns squad. The Redskins face the Cowboys twice and the Giants once. This is called an opportunity. It’s something the Redskins are pretty used to squandering in the Shanahan era.

Under Mike Shanahan the Redskins are a bad football team. They lose lots of games at home, they lose more than they win overall, and they routinely blow winnable games in the final minute. And yet, with Shanahan’s third season running the Redskins two thirds of the way over, a faint light is glimmering in the distance. Helped along by bad competition and an astounding rookie quarterback, the Redskins may just make the last part of their season interesting.