Alex Anthopoulos Swings For the Fences

It’s put-up or shut-up time for the Blue Jays’ GM. 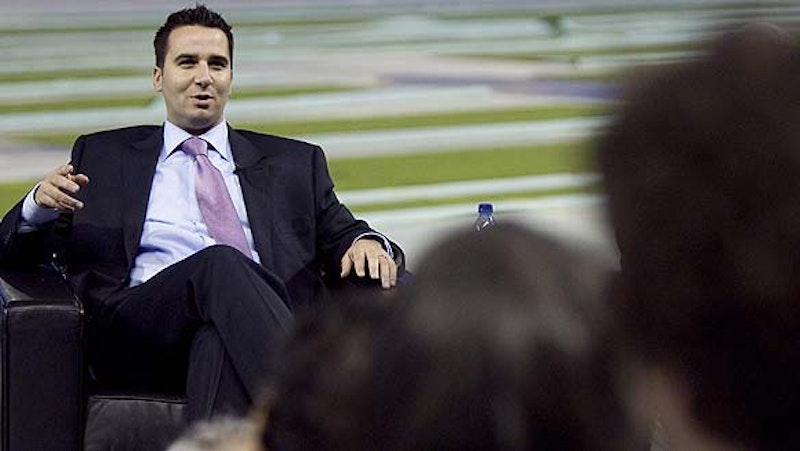 When news of the Blue Jays/Marlins 12-player swap broke earlier this week it upended the baseball world. The Marlins once again dumping salary was no surprise, but the fact that Toronto was the beneficiary served notice to the rest of the Major Leagues. The Blue Jays had been considered a sleeping giant for years while GM Alex Anthopoulos worked the bargain bin and hoarded prospects. The Jays were linked to numerous premium free agents over the past few seasons but the big names invariably ended up someplace south of the border. By embarking on this historic swap Anthopoulos has answered his critics and cemented his legacy, for better or worse.

I figured there was a pretty good chance that Miami would unload Jose Reyes and Mark Buehrle if the right deal came along; some team willing to take on nearly all of their heavily back-loaded long-term contracts. To see both of them traded in the same deal, along with Josh Johnson, John Buck, and Emilio Bonifacio, was stunning. Marlins' owner Jeffrey Loria managed to clear most of his club's future payroll obligations in one fell swoop.

The fans of the Marlins and taxpayers of Florida should be chasing Loria through Little Havana with pitchforks. Loria’s franchise and his reputation are in tatters. Just seven months since opening a new ballpark built mostly with public funds the Marlins are once again a baseball joke. Loria doesn't care. The team is Loria's to do with as he pleases. You can thank Bud Selig for that.

The trade makes the Blue Jays a contender in the American League East. After winning just 73 games in 2012, and trading their manager to Boston, the Blue Jays add four major pieces from Florida. Reyes has the ability to be the AL's best leadoff hitter not named Mike Trout. Johnson and Buehrle will go straight to the top of Toronto's rotation. Once promising hurlers like Ricky Romero, Brett Cecil, Kyle Drabek, and Drew Hutchinson all suffered through injuries, inconsistency, or both. Emilio Bonifacio gives Toronto another base-stealing threat to hit behind Reyes in the lineup and serve as a second table setter for sluggers Jose Bautista and Edwin Encarnacion. Bonifacio also fills a hole at either second base or in the outfield.

There is considerable risk in this deal for the Jays and Anthopoulos. Reyes brings his $100 million contract and questionable hamstrings to the unforgiving artificial turf of the Rogers Centre. The Jays have signed up to pay Buehrle a total of $37 million for his age 35 and 36 seasons (2015 and 2016). The oft-injured Josh Johnson is a free agent following the 2013 season. Bonifacio missed significant time to injury in 2012.

Regardless of the risks Anthopoulos was right to pull the trigger. Luring big name free agents to Toronto has never been an easy sell. The cost for free agent pitching isn't coming down; consider the rumors of the solid-but-unspectacular Anibal Sanchez looking for $90 million on the open market. Anthopoulos had enough prospects and free agent rejections stockpiled to finally pull the trigger on a big deal. The trade doesn't make the Blue Jays a playoff team; they still need a first baseman, outfielder, and another starter, but it does make them competitive and relevant. The best part of the trade for Toronto fans is the name that was not included in the deal; top prospect Travis D'Arnaud. D'Arnaud, 23, is one of the top catching prospects in the game with a high offensive ceiling. That Anthopoulos was able to pull off this blockbuster while holding onto D'Arnaud greatly improves the Jays' future prospects. Now Anthopoulos can move incumbent catcher J.P. Arencibia to fill another hole while sliding the rookie D'Arnaud behind the dish. Anthopoulos finally swung for the fences; time will tell if he connected.