A Batch of NFL Midseason Awards 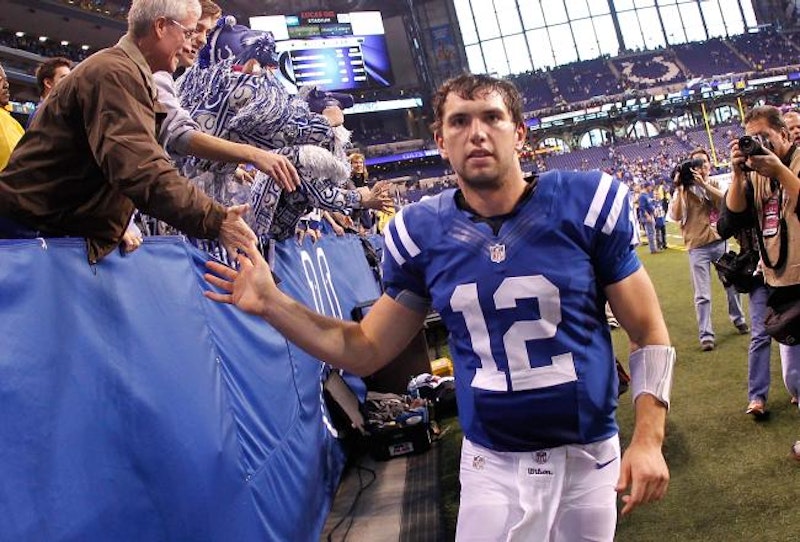 The NFL season has reached the midway point, and the league's much ballyhooed parity has taken a hiatus in 2012. If the playoffs started today only three teams (New Orleans, Cincinnati, and Detroit) that made the playoffs in 2011 would miss the cut. The only 2011 playoff teams that are currently under .500 are the embattled New Orleans Saints and the typically bungling Bengals. The Andrew Luck-led Colts may be the only team to make the jump from sub .500 in 2011 to the playoffs this season. Luck could even emerge as a viable MVP candidate in the second half of the season. While most of the league has stuck to the script through the first half of the season the emergence of Luck, the Bears once again looking like monsters of the midway, and Doug Martin doing his best Ray Rice impression have made for some interesting story lines.

Watt is a defensive lineman for the 7-1 Houston Texans. When the Buffalo Bills lured Mario Williams from Houston with a blank check last spring the Texans didn't fret. Watt has been a dominating force for Houston while the people of Buffalo are forming a search party to locate Williams. Watt has racked up 10.5 sacks, recovered two fumbles, and deflected 10 passes. That's the same number of pass deflections as future Hall of Fame safety Ed Reed. History is working against Watt. Lawrence Taylor was the last defensive player to win the award in 1986. And while Watt probably won't win the MVP at season's end, he gets my vote today. Peyton Manning has 20 touchdowns and is completing nearly 70 percent of his passes in his first season with the Denver Broncos. Manning is averaging a league high 8.23 yards per attempt. Green Bay's Aaron Rodgers, the reigning MVP, has tossed 25 TDs to just five interceptions on the season. The MVP vote will likely come down to Manning and Rodgers.

I'd give this award to Manning for the reason's stated above. He’s come back from numerous neck surgeries, a full season on the sidelines, turmoil surrounding his departure from Indy, and Denver's Tebow-mania hangover to re-assert himself as the best QB in the league. Adrian Petersen, another All Pro returning from injury, is having a standout season for the surprising Vikings. While Minnesota has come back to Earth following a hot start, Petersen has been on fire after returning from an ACL tear late last season. Petersen currently leads the league in rushing with 957 yards and is second with 42 rushing first downs.

Tillman has been one of the top playmakers for the Chicago Bears’ devastating defense. Despite the league's best efforts, the Bears put on a dominant defensive show each week. Tillman has forced a league high seven fumbles in eight games this season, and recovered a fumble, intercepted two passes (both of which he returned for touchdowns), and defended six passes.

Luck has been everything the Colts had hoped he'd be when they jettisoned Peyton Manning during the offseason. He set a rookie record last weekend when he threw for 433 yards in a win against the Miami Dolphins. Luck's stats may not be mind-boggling (10 TDs, 8 INTs, 56.5 completion percentage) but he has returned the Colts to the realm of NFL relevancy. The rookie is currently tied for third in passing yards (2404) with Peyton Manning. Robert Griffin III started out like a house afire for the Redskins, but he's been overshadowed by fellow rookies Luck and Doug Martin of Tampa Bay. Martin has emerged as the lead man-crush for fantasy football owners after romping over the Raiders for 251 yards rushing and four TDs in a week 9 win over the Raiders.

It's been a disappointing season in Carolina but first round draft choice Luke Kuechly has been a rare bright spot. The Panthers chose Kuechly with the ninth pick in the draft and recently installed him as their starting middle linebacker. While the Cowboys' Morris Claiborne has been hampered by injuries in recent weeks, Kuechly has emerged as a potential star for Ron Rivera's Panthers. The rookie currently ranks third in the league in tackles with 77 behind the Vikings' Chad Greenway and Jerod Mayo of New England.