2012 was a spectacular year for MLB rookies. 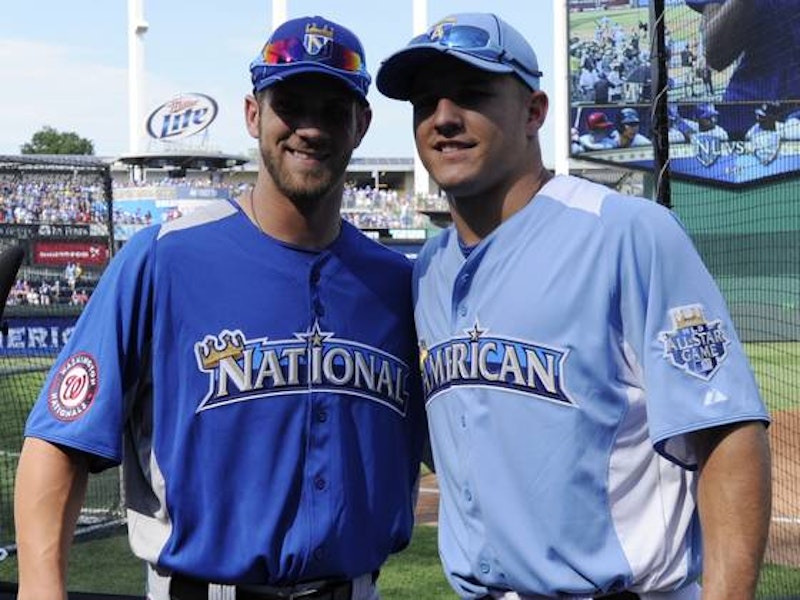 There were no surprises on Monday when the Baseball Writers Association of America announced the winners of the American League and National Rookie of the Year. The Angels' Mike Trout predictably, and deservedly, received all 28 first place votes to take home the AL ROY. Washington's Bryce Harper beat out Wade Miley of the Diamondbacks to win the NL award. The impact of Harper and Trout will no doubt reverberate through the baseball world for years to come. The talented youngsters are scratching the surface of their ability and should provide countless thrills for baseball fans over the next 10-15 years.

Though Trout and Harper have grabbed the headlines, baseball fans should be equally as excited by the rest of MLB's 2012 rookie class. Japanese imports Yu Darvish and Wei-Yin Chen both posted terrific seasons, for the Rangers and Orioles respectively, pitching their teams to the postseason. Darvish finished third in the AL voting behind Trout.

Chen's teammate Manny Machado, 20, was called up to the big leagues in August. He provided stellar defense at the hot corner for Baltimore and became the youngest player in franchise history to hit a postseason home run. Machado looks like a future star but his late season debut cost him a shot at the ROY award.

Another third baseman, Boston's Will Middlebrooks, broke out in 2012. Middlebrooks arrived in Fenway in late April and provided an instant boost to the Red Sox offense. The youngster hit so well upon his promotion that incumbent third baseman Kevin Youkilis was quickly shipped off to the South side of Chicago. Middlebrooks played just 75 games before going down with an injury but he'll be counted on to provide power to Red Sox lineup in 2013 and beyond.

The Oakland Athletics were the most shocking baseball story west of the Mississippi in 2012. Cuban import Yoenis Cespedes provided instant credibility to a young lineup. Cespedes finished second in the ROY voting behind Trout. Bob Melvin's A's had several other rookies that helped propel Oakland to the top of the AL West. Starters Jarrod Parker, Tommy Milone, A.J. Griffin and Dan Straily combined to start 82 games and record 35 wins. The quartet of talented hurlers will form the backbone of Oakland's team until they reach arbitration or Billy Beane decides to trade them off for the next wave of prospects.

Over in the National League Todd Frazier of the Reds gave Dusty Baker's squad a boost when former MVP Joey Votto missed over a month due to injury. The rookie infielder filled in at first for Votto and at third for the aging Scott Rolen. Frazier finished third in ROY voting behind Harper and Miley. Frazier hit 19 home runs and posted a .829 OPS in 128 games for Cincinnati. With Rolen likely to depart as a free agent Frazier should be a fixture in the Reds' lineup next season.

Rockies rookie catcher Wilin Rosario had the stats to win the award if not for the NL's deep freshmen class. The 23 year-old Rosario slammed 28 home runs and drove in 71 in 117 games, and posted a .843 OPS and caught 32 percent of would be base stealers. Braves rookie shortstop Andrelton Simmons was impressive before suffering an injury shortly after his debut. The Curacao native may already be one of the National League's best defensive shortstops. Cubs fans not so patiently awaited the arrival of Anthony Rizzo in Wrigleyville. The budding slugger did not disappoint as he went on to hit 15 home runs, knock in 48, and post a .805 OPS in 87 games. Rizzo is the centerpiece of Chicago's mammoth rebuilding project.

Baseball fans were also treated to a sneak peek of 2013's rookie class with the late season debuts of Dylan Bundy and Jurickson Profar. The pair of teenagers will hope to duplicate the success of Harper and Trout. Fans of America's Pastime could be in for another treat in 2013.