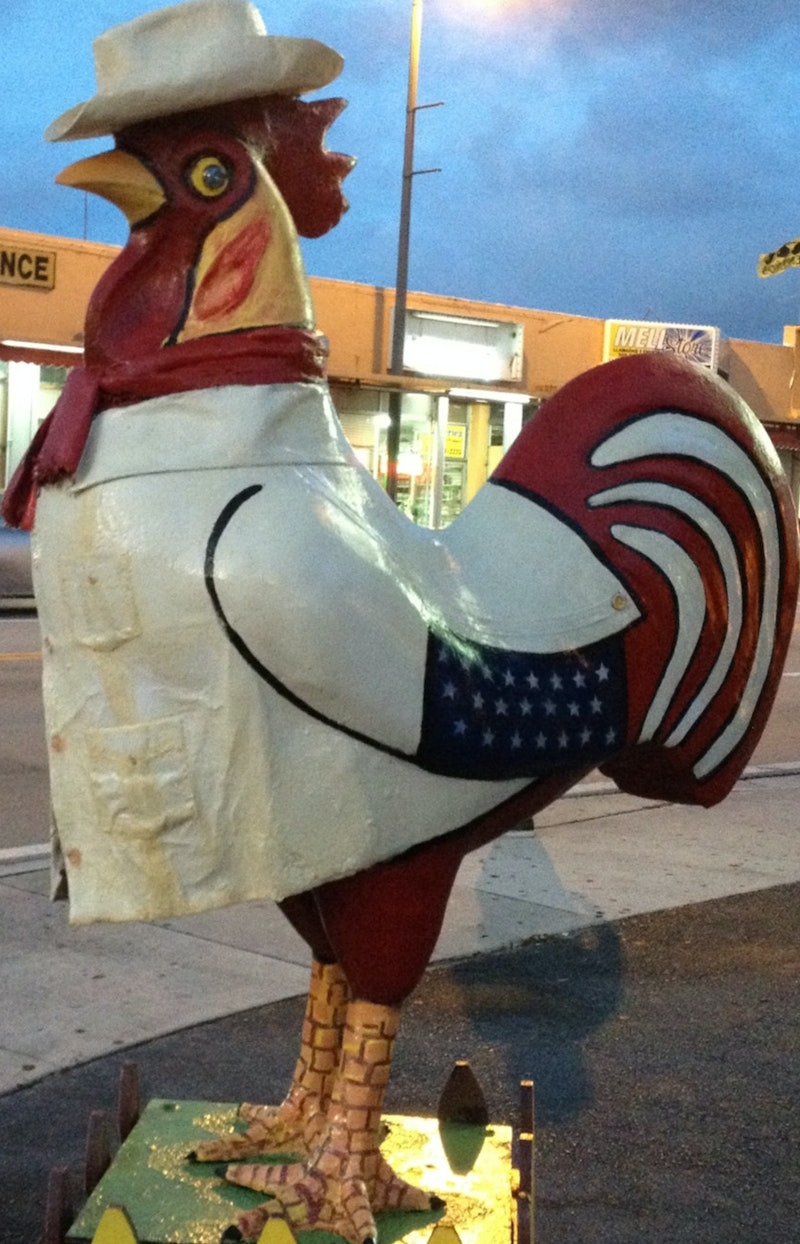 Two mornings ago, I was out on the balcony of a suite at downtown Miami’s Viceroy hotel, and a thought struck me: aside from the palm trees, this water view was remarkably similar to that of Baltimore’s Inner Harbor. In the distance there was an AT&T skyscraper, a Hyatt hotel, a Capital Grille restaurant and Citibank building. Nothing said Miami: it could’ve been almost any city in the depressing, if inevitable, generic United States of 2012.

My son Booker and I were in Miami on a road trip, the centerpiece of which was a Red Sox/Marlins game on June 11 at the latter team’s new, 34,000-capacity ballpark. The game wasn’t sold out, which surprised me even though the Bosox are an under-.500 team in desperate need of a blow-up-the-roster rebuild, and confirmed the doubts of naysayers at the start of this season that even a splashy, centrally-located venue couldn’t defy the reality that Florida just isn’t a baseball-friendly state. Marlins Stadium, once the relative novelty wears off, is destined to become a white elephant, and though it’s possible that Marlins owner Jeffrey Loria will sell the team to someone who’s willing to spend a lot of dosh on marketing, it’s more likely that in a more forgiving economy the franchise will be relocated to a city that has an appreciative fan base. A buddy of mine, who lives in Miami, says that there’s just too much going on there, and baseball isn’t a priority. Say it loud, brother! Marlins Stadium does have a very cool and psychedelic scoreboard, where the player at bat is displayed in a four-panel Warhol-like presentation, but the facility’s construction, at least to my untrained eye, looked like it was built on the cheap.

Digression complete, I was mostly disappointed in this latest visit to Miami—I hadn’t been in a decade—because, as noted above, it could’ve been Boston, Philly, Baltimore or even a small-scale New York. In 1987, I met two friends from Phoenix in Miami, on a business jaunt, and was blown away upon arriving at the airport and hearing a joyous samba band play at the baggage carrousel, in an open-air concourse filled with travelers wearing incredibly loud Latin American shirts, and then immediately repairing to a local café/bar and drinking cup after cup of Cuban espresso, chased by Corona beers. It was exotic, from the Santeria shops in Little Havana to the still-developing South Beach mecca to the quick ride to the Everglades.

One attraction, however, hasn’t changed: the fabulous Cuban grub. The Viceroy’s concierge made a reservation for us at the trendy Versailles restaurant, but when we arrived there was a long line and the host said reservations weren’t accepted. As luck would have it, though, I noticed just a block away was La Carreta, a terrific diner that I first visited in ’87, and once again it was flat-out great. Cuban cuisine isn’t particularly complicated: black beans and rice, fried plantains, shrimp in garlic oil, pork chunks, chicken and yellow rice and slow-cooked strips of cheap but tender beef, but this is the kind of food I haven’t successfully found in other cities on the East Coast.

Outside La Carreta we were struck by a rooster sculpture, and, aside from wishing we could buy one to put on the lawn of our prim and proper Baltimore city neighborhood, when we took a long stroll in Little Havana, more of these sculptures kept turning up. Turns out there are eight of them in the neighborhood, commissioned in 2002 by the Miami Dade Empowerment Trust, based on the work of the late local artist Tony Lopez. It’s what passes, I suppose, as a unique Miami twist, and, given the preponderance of Whole Foods supermarkets, Starbucks outlets and Gap stores, it brightened my dark cloud spirits. You take what you can get.