Is a Baseball Financial Correction on the Horizon?

Cash is flowing throughout MLB at a dizzying pace, but how long it lasts is questionable. 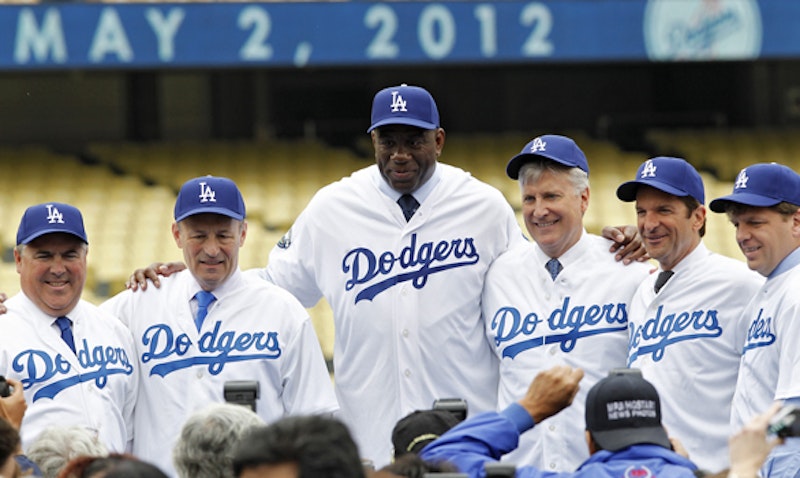 As Major League Baseball’s winter meetings continue in Nashville this week, the perfidy of Miami Marlins owner Jeffrey Loria is—sort of—on the back burner. Loria’s a functioning madman, however, so if he trades the team’s remaining star, Giancarlo Stanton, the 72-year-old will hog the attention once again. What’s more likely, I think, is that in the next year Loria will unload his team—in March of this year Forbes valued it at $450 million, pre-L.A. Dodgers astounding $2.1 sale—to some Miami sucker/civic philanthropist/savior for a figure way north of that spring appraisal. The question’s been raised, naturally, and denials from the Loria camp are issued promptly, but who’s going to take this con man at this word?

As I’ve written before, Loria may be a double-dealing lout who raided the coffers of a foolish legislature to build him a white elephant stadium in downtown Miami, but he’s obviously very crafty. And if he does sell the franchise, especially for an inflated price, it may signal the first flash of the MLB Correction, less harmful but not unlike the dotcom failure in 2000 and then, far more destructively, the housing/credit default disaster that spilled out in 2008, and was a key component of the country’s still flailing economy.

Consider all the funny money floating around in baseball today. Yes, it’s the Dodgers who are leading the charge, as GM Ned Colletti operates with no discernible budget from his punch-drunk owners, seemingly intent on collecting a weird mix of high-salaried players in the hopes that a few of them will lead the team to the playoffs. The Dodgers are also about to finalize a sale of its television rights to Fox (which is building a sports network to compete with ESPN) for a staggering $6 billion. That comes on the heels of Fox parent News Corp.’s purchase of 49 percent of the YES, the Yankees TV propaganda organ for a purported $1.5 billion. I’m not a trained economist, but with the cable industry in decline, both of these deals are hard to fathom; great for the Dodgers and Yanks (and other minority owners like Goldman Sachs), and maybe Rupert Murdoch, at 81, has a grand scheme to maximize his latest spending spree. (Incidentally, the Giants/Tigers four-game World Series, carried on Fox, set a record for the least viewers, although the lack of a major market might’ve contributed.)

Craig Calcaterra, the prolific baseball blogger for NBC’s Hardball Talk isn’t as bearish as me, but he believes that the “have-nots” could be in trouble in upcoming years. He emailed: “I don’t know that we’ll see a league-wide bust—attendance has been pretty resilient and national broadcast contracts with Fox, ESPN and TBS are set for several years—but I think we’re due for a local television money bust that could cause serious problems for several teams.” (Boston’s NESN and the Orioles/Nationals MASN come to mind.)

Another respected sportswriter largely agreed on this point, emailing: “I think this is more about cable and advertising than baseball, though—that’s the business that’s going the way of print. The justification you hear for these huge deals is that sports are the only programming that desirable demos don’t/can’t Tivo/Netflix/Apple TV their way through, and that this is what’s driving the bubble in baseball, college sports, etc., but I still don’t quite see how numbers add up given that cable is clearly in secular decline.”

The free agent market, in which superstars are inking contracts for more than $20 million/year (even if back-loaded), is out of control. Now, that’s been said since the onset of free agency decades ago, but when—to take a relatively minor deal—a run-of-the-mill player like Mike Napoli receives a three-year/$39 deal from the Red Sox and Anibel Sanchez is seeking $90 million from some team starved for a number three or four starter, it makes you wonder. Is there a point in the near future when teams, stopping short of open collusion, put a break on issuing such contracts or will it continue until a club’s batboy commands $200,000 a year?

MLB attendance was up slightly in 2012 (1.8% over 2011), although as always some franchises fared better than others. Say that Loria does take the last ship out on mind-bending sales; where will that leave teams like the Houston Astros, Tampa Bay Rays, Minnesota Twins, Seattle Mariners and the chronically under-water New York Mets (all of which suffered spectator declines in 2012)? Who’s going to pay a fair, let alone premium, price for one of those franchises? Maybe supposed bad-boy Mark Cuban, who’s effectively banned from MLB involvement by Commissioner Bud Selig, but it seems reasonable that even wealthy men who in the past wanted to fulfill their childhood dreams of owning a team and sitting in a luxury box, will find better ways to spend their money and sate their vanity.

There are other factors that could dampen the money-strapped public’s enthusiasm for forking over in excess of $200 a game (tickets, food, trinkets for the kids, etc.) that might emerge. You know that another PED scandal is about to erupt, with the athletes who aren’t smart enough to conceal their use of the latest pharmacological boost (Melky Cabrera or Carlos Ruiz, for example, as opposed to Ryan Braun, who was ingenious in beating the system), getting caught as MLB catches up with the latest drug innovations. It’s true that baseball, like the government, is always behind the curve on the newest ways to dodge the law, but you can smell something’s about to break. I’ve no idea what player does or doesn’t use PEDs (and, frankly, I think all these drugs should be legal; if a person wants to risk his later health for a boost, so be it), but it’s a bit strange that the Blue Jays’ Jose Bautista and Edwin Encarnacion, and the A’s Josh Reddick—younger, but in Oakland?—to cite just a few, found an untapped power stroke.

Nothing sours the public like a work stoppage—the ’94-’95 strike was a killer—but yet another full-blown drug scandal isn’t going to help attendance if people think robots are playing for their home team.

Throw in another recession this spring, maybe a StubHub investigation (the Yankees and Angels have railed at the ticket broker for their empty seats, though that looks like passing the buck to me), a continuation of athletes running afoul of the law with DUI’s, wife/girlfriend beating and such, and maybe the public will have had enough.