The Nats and Twins Swing an Old-Fashioned Baseball Trade

A win-win swap for both teams. 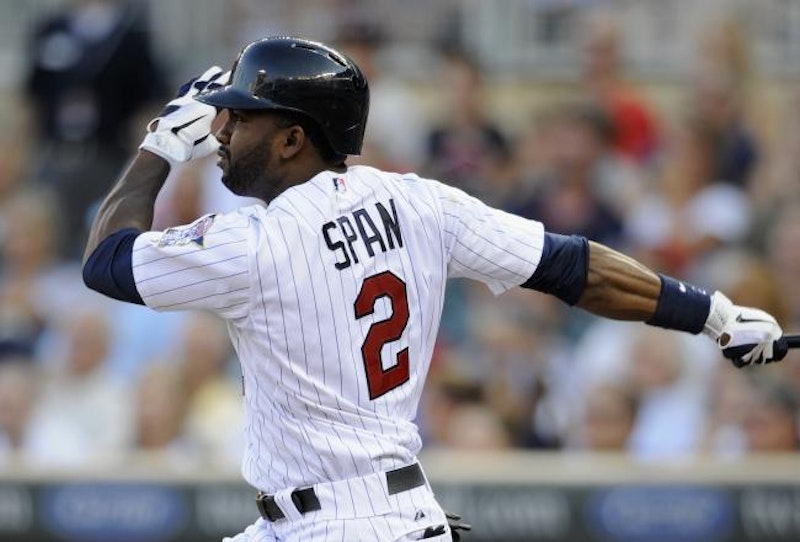 The Washington Nationals and Minnesota Twins agreed to a trade on Thursday that sent center fielder Denard Span to D.C. and pitching prospect Alex Meyer to the Twin Cities. It was a refreshing turn of events. The Span/Meyer swap was old school, the kind of trade that makes sense for both teams. The baseball headlines over the past six months have been dominated by record-setting franchise sales, escalating local TV revenue, and teams swapping $100 million contracts like grade-schoolers swapping Pokemon cards.

The Twins aren’t conducting a Marlins’ style fire sale. The Nats aren’t hoarding contracts like the Dodgers, or the Yankees before them. Neither team is crying poor or flexing their newfound financial muscle. Washington desperately needed a center fielder and the Twins need live arms. Meyer is a good start.

The Nats had been rumored to have interest in free agent center fielders B.J. Upton and Michael Bourn. Upton signed with the Braves earlier in the week and Bourn is reportedly seeking a contract worth close to $100 million. The trade for Span is a brilliant stroke for Nats’ GM Mike Rizzo. Manager Davey Johnson can pencil Span in at the top of the Washington lineup and watch him run down everything hit to center field. Span’s presence should give the Nats a dependable leadoff hitter and improved defense at a fraction of Bourn’s price tag. Rizzo took a lot of heat for his insistence on shutting down Stephen Strasburg late last season but this trade should help redeem him in the eyes of fans.

With Span in center, Bryce Harper can move to right field, a more appropriate position given his talents. Jayson Werth will likely slide to left field, leaving Mike Morse in limbo for the next few weeks. Not only does Span give Washington an instant offensive and defensive upgrade but he also gives Rizzo leverage in his negotiations with free agent first baseman Adam LaRoche. LaRoche put up a career year in 2012 and was one of Washington’s most indispensable players. He provided a constant power threat in the middle of the order while Ryan Zimmerman, Werth, and Morse all battled injuries. The Nats would no doubt like to retain LaRoche but the 33-year-old’s contract demands may not make sense for Washington. The Nats can move Morse to first base and use Tyler Moore as a backup first baseman and fourth outfielder. Moore cracked 10 home runs in just 156 at bats as a rookie in 2012.

The move also makes sense for the Twins, as they trade from strength to address their greatest organizational weakness. Minnesota’s pitching staff was atrocious last season. The 22-year-old Meyer probably won’t help the Twins in 2013 but he could be ready for a big league audition the following season. Minnesota can put Ben Revere at Span’s old position and patiently wait for Meyer to deliver on his potential.

The Nats and Twins jump-started the hot stove season with a perfectly sensible, easy to understand, mutually beneficial player swap. Maybe the rest of MLB will take notice.