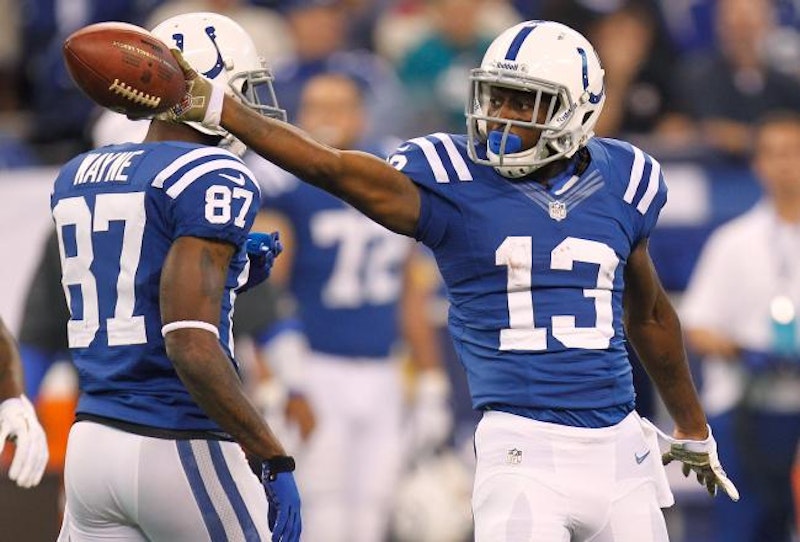 The start of the fantasy football playoffs is fast approaching. Larry Fitzgerald, Greg Jennings and Darren McFadden have been some of the biggest fantasy busts of the 2012 season. Jennings and McFadden have been hampered by injuries while Fitzgerald’s value has dropped once again due to shoddy quarterback play. The Cardinals have essentially wasted two years of the All Pro receiver’s career by their inability to find anyone who can get him the ball. If you missed the boat on Colin Kaepernick, hoped to run with DMC, or have been driven to fits by Fitz, don’t fret. There’s still hope for your squad. Here are some late season fantasy pickups that could save your playoff hopes.

Danario Alexander: Alexander had a few big games with the Rams last season. I foolishly predicted that Alexander would form a dynamic duo with QB Sam Bradford for years to come. Unfortunately, injuries dogged Alexander in his two seasons with St. Louis, as well as his college career at Missouri, and the talented wideout was cut loose. Alexander began the season without a team but he caught on with the Chargers after an injury to Vincent Brown and the continued inconsistency of Robert Meachem created an opportunity. Alexander has seized his chance with San Diego and been one of the NFL’s most productive receivers over the past month.

Chris Givens: Alexander’s role as Sam Bradford’s dynamic playmaker was filled by Chris Givens. The rookie from Wake Forest has emerged as the Rams’ deep threat hauling in 50-yard bombs in consecutive weeks. Givens has outplayed fellow rookie Brian Quick and has gained the trust of Bradford.  He posted his first career 100-yard receiving day in Week 12 and caught a career-high 11 passes in a Week 13 upset of the San Francisco 49ers.

T.Y. Hilton: Hilton is another rookie WR making a big impact. The speedster has quickly become one of Andrew Luck’s favorite targets. Hilton has 15 receptions and three touchdowns in his last three games.

Darren Sproles: If you play in a PPR (point per reception) league check your waiver wire for Sproles. He entered the season as a hot commodity but the Saints’ early season struggles and a hand injury dropped Sproles down the depth chart. Sproles has only carried the ball 26 times on the season but he’s hauled in 51 passes from Drew Brees despite missing several games. Sproles is one of Brees’ most trusted receivers and with New Orleans harboring playoff hopes they’ll be playing meaningful games the rest of the season.

Jacquizz Rodgers: Rodgers is another running back that can help in PPR leagues. The versatile second year back has 37 receptions on the season and has received additional carries over the past several weeks as Falcons’ starting RB Michael Turner continues to struggle. Rodgers may become a bigger part of the Atlanta offense down the stretch as the team hopes to secure home field advantage through the playoffs.

Chad Henne: Henne washed out after four star-crossed seasons in Miami. He landed in Jacksonville as the backup to Blaine Gabbert but inherited the starting role when Gabbert went down with a season ending injury in Week 11. Henne has tossed seven touchdowns in the past three games. He’s been inconsistent throughout his career but as the unquestioned starter for the Jaguars he’s worth a waiver wire claim for Ben Roethlisberger, Michael Vick, and Alex Smith owners.

Alex Smith: If someone cut Alex Smith in your league go ahead and pounce on him. Smith has been a solid fantasy option over the past two seasons. He didn’t deserve to lose his starting gig with the 49ers and there’s always a chance he could be promoted back to the top of the depth chart. Colin Kaepernick took the world by storm in his first two starts but was rather pedestrian in a loss last Sunday to the Rams. If Kapernick cools off Jim Harbaugh could turn back to the steady hand of Smith.