Can the team’s uncanny luck continue to the Super Bowl? 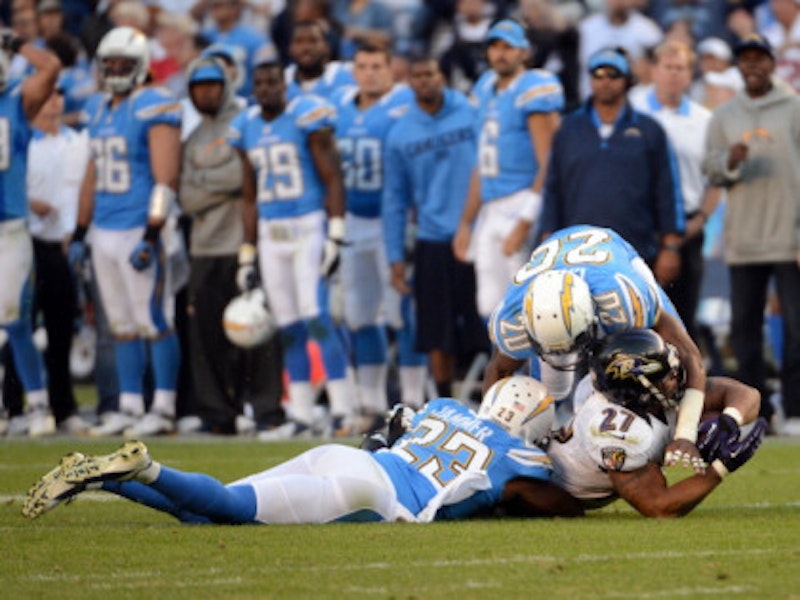 As the Orioles racked up come-from-behind and extra-innings victories throughout the summer, Baltimore fans delighted in the return of Oriole Magic. The song that had been a ballpark staple for decades suddenly took on real meaning for a new generation of fans. The AFC North leading Baltimore Ravens have carried the city’s string of unlikely wins into the fall. The purple and black may want to borrow Oriole Magic as a stadium anthem for a few months.

The Ravens pulled out another unlikely victory on Sunday afternoon in San Diego when they scored a 16-13 overtime victory against the Chargers. Baltimore trailed for much of the game before rallying late in the fourth quarter behind a suddenly tenacious defense and a seemingly miraculous catch and run from RB Ray Rice.

The Ravens faced a 4th-and-29 late with just under two minutes left in the game. What started as a promising late game drive had seemingly puttered out after a penalty and a sack of QB Joe Flacco that led to a fumble. The Ravens recovered the ball but hope was nearly lost. With just one timeout remaining, and the two-minute warning already elapsed, Baltimore would be forced to convert on 4th-and-29 if they had any hope of winning.

The Ravens sent their receivers deep while Rice leaked out of the backfield to catch a short pass from Flacco. Most of the San Diego defense had been pulled downfield to protect the deep routes. The remaining linebackers had little chance of sticking with the dynamic Rice. The All Pro running back darted and juked for 29 yards before going to the ground in a heap of jerseys near the first down marker. After an interminably long official review, the play was ruled a first down. Ravens' rookie kicker Justin Tucker ultimately kicked a field goal as time expired to send the game to overtime. Tucker connected again in the extra period to give the Ravens one of the most bizarre and invigorating victories in franchise history.

The win in San Diego was just the latest in a season filled with gut wrenching, too-close-for-comfort victories. The Ravens have been criticized for their stagnant offensive performances on the road but the team is now 4-2 away from M&T Bank Stadium. At 9-2 the Ravens are once again in position to host a playoff game in January and make another run at the Super Bowl.

The Ravens were on the wrong end of a terrible pass interference call from those ignominious replacement refs in a 24-23 Week 2 loss to the Eagles. Since that point Baltimore’s had a charmed season. Despite battling injuries to key defensive starters (Ray Lewis, Lardarius Webb, Pernell McPhee, Terrell Suggs, and Haloti Ngata have all missed significant time) the Ravens have scratched out last minute wins over the Patriots, Browns, Cowboys, and Chargers.

The first matchup with the hated Steelers came with Ben Roethlisberger on the sidelines. Big Ben may be a bystander for this weekend's re-match as he recovers from shoulder and rib injuries. Missing Roethlisberger twice in a season is a dream scenario for the Ravens. In the first matchup the Ravens essentially took the air out of the ball after a second quarter punt return touchdown by Jacoby Jones. Baltimore dared Pittsburgh backup Byron Leftwich to beat them with his arm. He wasn't up to the task.

The Ravens can clinch a playoff berth and AFC North crown with a win this weekend and a Bengals' loss. Success was predicted for the 2012 Baltimore Ravens, but the team's abundance of dramatic moments has confounded football commentators. Last second field goals, Dez Bryant brain farts, and injured All Pro QBs have conspired to assist the Ravens in their quest for AFC dominance. It's been said that it's better to be lucky than good. It's best to be both.