The Rays are a slugger away from domination. 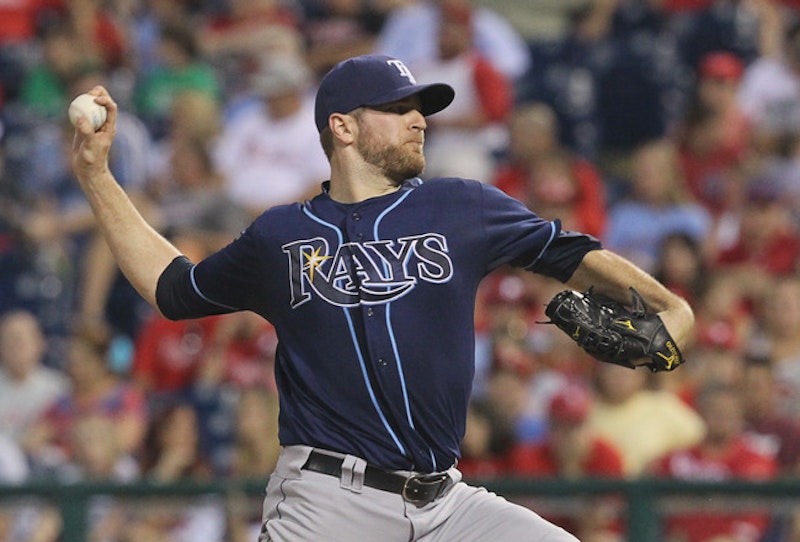 Baseball’s recently concluded Winter Meetings were largely uneventful. The big-ticket players like Josh Hamilton and Zack Greinke are still on the open market, Justin Upton remains a Diamondback despite seven months of trade rumors, and Michael Bourn’s free agent options are dwindling by the day. The strangest aspect of all may be the news coming out of the American League East. After yapping about the luxury tax and fiscal restraint for a year, the Yankees may be putting their payroll where their mouth is.

Not only is New York shunning Hamilton and Greinke (at least in public) but the Yanks were also outbid for the likes of Russell Martin, Jeff Keppinger, and Eric Chavez. New York committed big money to Mariano Rivera, Andy Pettitte, and Hiroki Kuroda last week. The 37-year-old Kuroda is the fresh-faced kid of New York’s high priced over the hill gang. GM Brian Cashman seems to be operating with a budget for the first time in his career. With holes at catcher, right field, and DH the Yankees’ front office will need to get creative. Throw in the uncertainty surrounding Robinson Cano’s future, and A-Rod’s newest hip injury, and there’s cause for real concern about the Yankees’ long-term prospects. The demise of the Yankees has been predicted for years but with staggering long-term contracts on the books for aging players and little help on the farm the fall of the empire may finally be upon us.

While the Yankees are licking their wounds, the Red Sox have spent big money on seemingly anyone willing to take it. Just months after dumping more than $250 million in salary on the Dodgers to rid themselves of Adrian Gonzalez, Josh Beckett and Carl Crawford, the Red Sox handed out a pair of three-year $39 million deals to Mike Napoli (31) and Shane Victorino (32). The average annual value of those deals is puzzling. Boston will be paying an aging Victorino $13 million in 2015. Victorino posted a career low OPS of .704 in 2012. Napoli had a career year in 2011 with the Rangers but slumped badly in 2012. Boston agreed to pay Napoli like the guy who posted a 1.046 OPS in 2011 rather than the one that hit .227 in 2012. The Red Sox still have a hole in the outfield and rotation but they seem unlikely to make a run at Hamilton or Greinke.

The Blue Jays made their big splash a few weeks back when they raided the Marlins for shortstop Jose Reyes and pitchers Mark Buehrle and Josh Johnson. The Blue Jays are on the lookout for more pitching and could make a run at National League Cy Young Award winner R.A. Dickey. The Mets look to be headed nowhere and could deal Dickey (a free agent after next season) for a package of prospects. Toronto has young catching to spare and could offer starting backstop J.P. Arencibia or top prospect Travis D’Arnaud in a deal for Dickey.

The Orioles didn’t do much during the Winter Meetings but EVP Dan Duquette seems content with his ballclub. The O’s re-signed outfielder Nate McLouth to a one-year deal reportedly worth $2 million. McLouth resurrected his career last August after struggling for several seasons and earning his release from the Pirates in May. McLouth impressed Camden Yards’ crowds with his defense, effort and versatility. The deal protects the Orioles in the event that McLouth cannot sustain his late season performance level. Oft-injured Nolan Reimold and rookie L.J. Hoes offer manager Buck Showalter platoon options with McLouth in left. Duquette has talked openly about adding another bat and a starter. The Orioles could re-sign lefty starter/playoff hero Joe Saunders and trade one of their young starters and left-handed relievers for a power hitter like Billy Butler or Michael Morse. Duquette clearly isn’t finished and after the success the Orioles had in 2012 there’s no reason for fans to doubt his ability or intention to field a competitive team in 2013.

The Tampa Bay Rays are one good hitter away from being the best team in the division. The Rays signed first baseman James Loney earlier this week, but he doesn’t qualify as that one good hitter. The Rays are rumored to be shopping starting pitcher James Shields, with the Rangers and Royals among the interested parties. Tampa needs another power hitter to pair with slugging third baseman Evan Longoria, and either the Rangers’ Mike Olt or Royals’ Wil Myers would be a welcome addition to Joe Maddon’s lineup. If Texas fails to land Greinke they could step up efforts to acquire Shields. The Royals are said to be in the hunt for a top starter. Kansas City doesn’t have the wallet to chase an ace on the open market but they do have assets, with Myers topping the list. If the Rays can swap Shields for Myers they could be setting themselves up for a two or three year run as the top team in the AL East.