No One Cares What Marshawn Lynch Says

Or, for that matter, LeBron James. 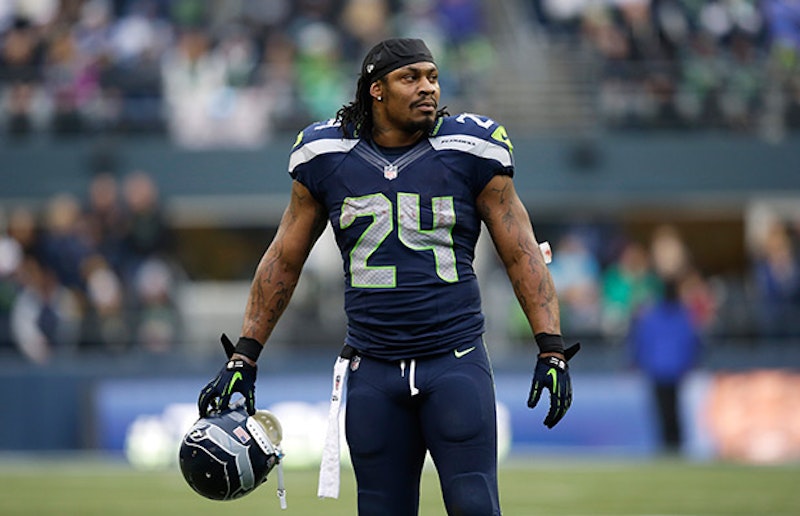 Marshawn Lynch, the self-proclaimed "Beastmode" running back of the Seattle Seahawks, has drawn the ire of the NFL and reporters this season for his refusal to participate in interviews. Lynch changed his approach after being fined $100,000 for failing to answer questions following last week's loss to the Chiefs. Instead of simply waving off reporters following Sunday's win over the Cardinals, Lynch listened to their questions before muttering a barely intelligible "yeah" or "nah." That's as much as "Beastmode" was willing to offer and we're probably all better off. Lynch gets paid good money to run as fast as he can into large men. His general musings have no impact on the life of fans or their enjoyment of the game. Fans care about two things when it comes to NFL players 1) Is he healthy enough to play? and 2) Did he score?

While I've never ever thought, "Gee, I wonder what Marshawn Lynch thinks about this topic?" I do understand that the media has a job to do. Obstinate players like Lynch make it difficult for reporters. I get it. Those media members have the ability write a column, produce a podcast, or go on a syndicated radio show to call Lynch a dick, but they can't make him talk. Of course, there are 52 other players in the Seattle locker room that can provide clichéd answers to routinely pointless questions.

The NFL requires players to be available to the media following games. Lynch made himself available, and perhaps made his point. He has nothing to say. I hope reporters get the message.

I don't blame Lynch at all for not talking. Speculation has swirled around the Seahawks that this will be Lynch's last season in Seattle. The team is reportedly set to cut ties with the expensive back to free up cash to sign other players to long-term contracts. Lynch's likely replacement is already on the roster in the form of second-year RB Christine Michael. Lynch can really only get himself in trouble by responding to media speculation about his future. Better to keep quiet and risk further fines than open your mouth and risk future earnings.

LeBron James may want to take a page from Lynch's media relations manual. The King's return to Cleveland hasn't gone quite as smoothly as planned. The Cavs recently dropped four straight games and their defense has been a disaster. While James' recent candor regarding the team's struggles is no doubt appreciated by major media outlets, his new teammates and coach may have a different opinion. James has repeatedly put himself above the team, and often above rookie coach David Blattt, in his post game remarks.

James called the team "fragile" following a loss to the Raptors last week. I can assure him that no one cares much for the fragility of a team that remade itself overnight with the return of James and the trade for Kevin Love. With three of the NBA's top players on the roster the Cavs are many things, but fragile shouldn’t be one of them.

After a game earlier this month in which James scored just 11 points he blamed the Cavs' years of bad habits for the loss. James suggested that he was trying to teach the rest of the team to win. In comments to ESPN James said, "This is more challenging than me trying to win my first championship." Those comments no doubt led to some eye rolls in both the Cleveland and Miami locker rooms. If James is going to claim ownership for those championships he better take ownership of those 11-point clunkers too.

The Cavs are a work in progress, which shouldn't come as much of a surprise to anyone. The team has three new starters, a new coach, and the world's best "loose-lipped" player. The NBA playoffs are a long way off and Cleveland has plenty of time to gel and to acquire some front-court defense. In the end Cleveland's talent will win out on the court. The real question is whether anyone in the Cavs' organization has the status and credibility to tell James to just shut up and play basketball.