How Far Will the Miami Heat Fall This Season?

And more storylines to watch at NBA begins play. 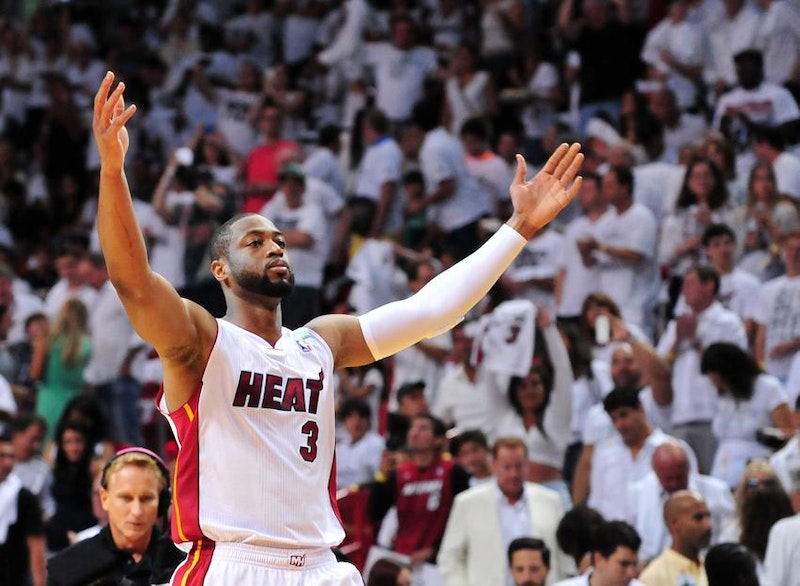 The NBA season gets started this week and all eyes will be on LeBron James and the Cleveland Cavaliers, the defending champions in San Antonio, Steve Kerr and Golden State's Splash Brothers, and the return of stars Derrick Rose and Kobe Bryant. Here are some others that should draw your interest.

Derek Fisher and Big Chief Triangle: I was pretty shocked when Phil Jackson, upon being spurned by former pupil Steve Kerr, handed the keys to the Knicks to another former pupil in Derek Fisher. The Knicks are a mess, and probably will be for some time, but they do have a star in Carmelo Anthony and a collection of intriguing young players. I recently read Jackson's Eleven Rings, which gives a first-hand, and often self-serving, account of his record 11 NBA championships. Jackson praises Fisher's throughout the book and celebrates the former point guard's leadership ability. Fisher may have the mindset and training to some day be a successful coach but he'll need Jackson to find some players first.

Nerlens Who?: The 76ers appear determined on flushing another season down the toilet in hopes of being rewarded in the draft lottery next spring. After sitting out all of the last season due to injury, Nerlens Noel, the number one overall pick in the 2013 draft, will make his professional debut this season. Noel is projected as a defensive force in the paint but he'll also have plenty of opportunities to put the ball in the basket. With Spencer Hawes with the Clippers and Thad Young in Minnesota the bulk of Philly's inside scoring opportunities will go to Noel.

How far will the Heat fall?: As a Heat fan the LeBron James departure was a gut punch. The team went from perennial Finals participant to Eastern Conference afterthought. I'm hoping that the experts are just overlooking Miami and that Chris Bosh, Dwyane Wade and newcomers Luol Deng and Josh McRoberts are enough to keep the Heat in the playoff picture. Deng is a solid two-way performer and McRoberts' presence should allow Bosh to return to his Toronto days of roaming the paint and putting up double-doubles. On the downside the team is thin in the front court and Wade's disastrous Finals performance doesn't bode well for the future.

Alphabet Soup All Stars: The League has a larger global presence than ever and several young International players could be on the verge of a breakout. The Bucks plan to use 6' 11” Giannis Antetokounmpo, aptly dubbed "The Greek Freak,” at both backcourt spots as well as his more natural small forward position. The 19-year-old averaged 6.8 points and 4.4 rebounds per game as a rookie last season. Antetokounmpo grew two inches since the start of last season and hopes to take his game to new heights this season. The Greek Freak should prove to be an excellent running mate for presumptive Rookie of the Year Jabari Parker.

Raptors center Jonas Valanciunas may not have a catchy nickname but he’s on the verge of an All Star season. The third-year player from Lithuania made strides as a scorer and rebounder last season, registering 25 double-doubles. The seven-footer may soon be a standout in the center-starved Eastern Conference. If Valanciunas can continue his on-court development the nicknames will follow.

The Lakers Demise: The Lakers are going to be bad this season. I won't shed any tears but I am pulling for Kobe Bryant to have a successful return from his Achilles tear. Bryant is one of the NBA's all-time greats and it’d be nice to see him end his career as a healthy and competent player. Bryant's teammates are a different story. The acquisitions of Jeremy Lin and Carlos Boozer are band-aids acquired after the team struck out in free agency. Julius Randle could figure into the Rookie of the Year discussion and he may be LA's most important player. Randle dropped in the draft due to concerns about his size and injury history. If he can establish himself as a solid starter he could be the Lakers' first building block for the post-Kobe era. The Lakers need to be bad enough to finish with one of the league's five worst records, otherwise their pick goes to Phoenix for the awful Steve Nash signing, in order to secure a potential future star to pair with Randle.