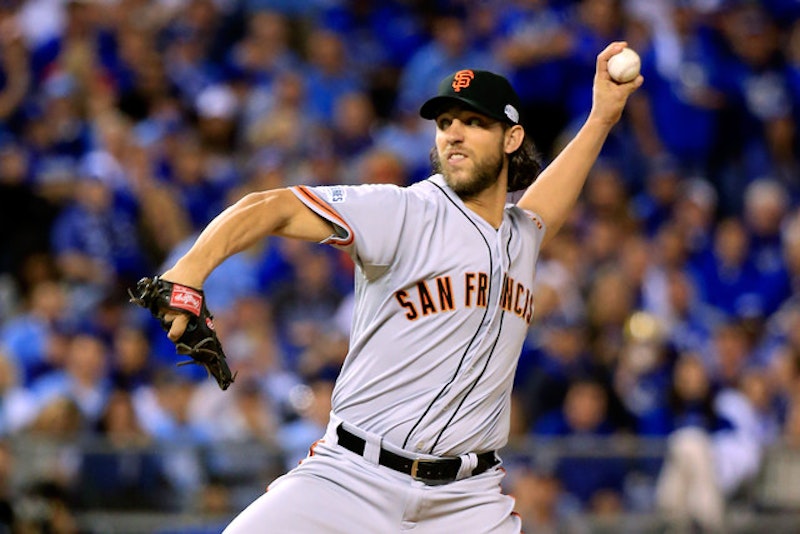 The San Francisco Giants entered Game One of the 2014 World Series with the prospect of facing the man dubbed “Big Game James” in front of a fervent crowd set to unleash nearly 30 years of pent-up frustration. Less than a half hour into the contest the Giants had reduced the Royals’ top starter James Shields to “Big Lame James” and San Francisco hurler Madison Bumgarner was on his way to another flawless postseason performance.

Superlatives for Bumgarner flowed following his seven innings of shutout baseball. The victory pushed Bumgarner’s postseason record to 6-3 in 11 starts spread out over three separate playoff runs. His stellar pitching has overshadowed another incredible October for Pablo Sandoval. The soon-to-be free agent third sacker notched two hits and knocked in two runs in the Game One victory. Sandoval has replaced Derek Jeter as baseball’s preeminent postseason bat with a batting average nearing .330 and an OPS over .920 in 33 career playoff contests. If Sandoval played for the Yankees you wouldn’t be able to order a sub or rent a car without seeing his smiling mug.

Bumgarner has developed into one of baseball’s most unflappable and underrated talents over the past five seasons. The 25-year-old southpaw was along for the ride as a rookie during San Francisco 2010 championship season pitching in the shadow of Matt Cain and Tim Lincecum. When the Giants hoisted another World Series trophy in 2012 Bumgarner took a back seat to undisputed ace Matt Cain. Now Cain is sidelined with an injury and the once dynamic Lincecum has been relegated to the far end of Bruce Bochy’s bullpen. Bumgarner has risen to the challenge. He’s already started six games this postseason logging 38 2/3 innings while allowing just five runs and issuing five free passes.

While All-World lefty Clayton Kershaw has struggled to a 5.12 ERA in 11 career postseason appearances the less celebrated Bumgarner has dominated October. Bumgarner has amassed an impressive collection of numbers, and World Series rings, in his brief career but when it comes to his contract it’s the Giants who win again. San Francisco inked the left-hander to a long-term contract that could keep him in orange and black through the 2019 season. Bumgarner stands to make $28 million over the next three season with $12 million team options awaiting in 2018 and 2019. The Giants could keep Bumgarner in San Francisco until he turns 30 for a total of $52 million. The Dodgers will pay Kershaw $160 million in the same time frame.

The Giants have relied on the genius of Bruce Bochy, the intensity of Hunter Pence, and the historically productive postseason hitting of Sandoval to become October mainstays over the past five years but a healthy dose of Bumgarner could keep the good times rolling for years to come.