How do mothers of baseball pitchers breathe? 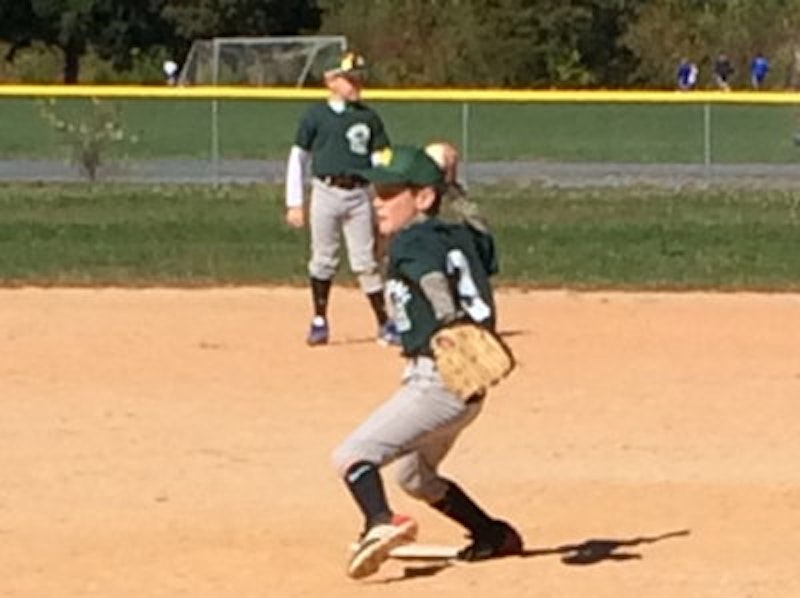 After a devastating playoff loss in last spring’s baseball playoffs, my son is playing fall ball. It’s his first time in fall ball, which appealed to me because the setup is one game each week (though Sunday, ugh) and no practices. A little more casual than the more competitive spring season, and since this upcoming year would be his first in kid (versus machine) pitch, we figured the extra season would be good for him to get used to being pitched to by a live kid.

And it has. Once again, I’m keeping score, as I have for years and love. The league is nine-10 year olds, which means my son, who just turned nine, would be playing against some boys whose 11th birthday was on the horizon. That can be a big age difference. But going into his sixth year of playing baseball, my son wasn’t intimated by the potential age difference. He just wants to play baseball.

He’s lucky to have a fantastic coach this season, who gave a great speech at the beginning of the season about not worrying about winning or losing (normally I hate these speeches; of course the boys want to win) but about having one goal for the game. He said every time they start a game, the boys should have a goal for that game: make a good play in the field, make contact with the ball or steal a base. Stealing is particularly cool right now because they weren’t allowed to do it in machine pitch last spring, and is easy because of, ahem, the high number of overthrown balls. It’s not uncommon for a kid to steal second, third and home. Because of all this overthrowing, there’s a seven-run limit each inning and if a team is up by seven runs, stealing is out.

Anyway, the speech in September seemed reasonable to me, and as we walked back toward the dugout, and I copied the lineup for the other team, my son walked over and said, “My goal is to pitch one inning this season.” I internally cringed. No time to argue that the coach had said to set a goal for the game not the season, and besides, I thought, once he faces a few nearly-11-year-old pitchers and watches boys on his team throw some fastballs with a few years’ experience behind them, he’ll probably forget about it.

But he kept asking. I stalled, telling him he had to tell the coach if he wanted to pitch an inning. The assistant coach has twin sons who are both amazing pitchers, and there were two more solid pitchers behind them in our dugout. But Bobby did tell the coach. I mentioned it once to him as well, apologetically: “Hey, if there’s ever a game where we’re ahead by more than seven in the last inning…” No problem, he said. And the season went on, getting colder and colder with each passing Sunday game.

And each week, every other day but Sunday, Bobby took his glove and a baseball and went out to the backyard with a bucket, walked off the 43 feet that represents the distance between the pitcher’s mound and home plate in his league, and pitched. If his dad or I or a random sister were available, we’d let him throw pitches to us. So he practiced, but he’d never stood on the pitching mound and thrown a pitch to an actual batter.

Then last Sunday, we were up 18-7 with two innings left to go. It looked like Bobby was going to get his shot. I did math. How many runs could the other team get on the seven-run max to beat us in the last inning if Bobby pitched this inning? I saw the coaches confer with one another, and come over to tell Bobby he was going to the mound. I made furious, unnecessary doodle scribbles in the scorebook. I didn’t want to watch, but had to keep score.

The inning was a blur. I saw our coach tell the other coach “first time pitcher” and the latter sort of laughed and said “Let your fielders field them.” I saw Bobby’s wrinkled brow, so much intensity for a kid, I thought. And he pitched. Some batters walked, one got a hit. He struck a kid out, and I saw the tiny glimmer of pride, gone in a flash, replaced with the concentration on the next batter. I looked at the time on my phone. The bases were loaded. I looked at the umpire, who could call the game on a two-hour time limit if he wanted after that inning, but if he didn’t, the other team could potentially catch up and win, and Bobby would go home miserable.

Is this how all mothers of pitchers feel? I thought. How do mothers of MLB players eat, sleep or breathe? Man, I had no idea how great it was being the mother of the second baseman. Sure, there are tough plays at second, but all the eyes on the field aren’t always on second base.

I counted the number of shaded-in runs on my scorebook for the inning so far: six. Okay, I thought, one more run comes in and this inning is over. And then Bobby struck out a second kid to end the inning. The umpire called the game on the two-hour rule: there wouldn’t be another inning. We’d won, 18-13, and Bobby met his season-opening goal: to pitch an inning.