Joe Maddon Is the New Face of the Cubs 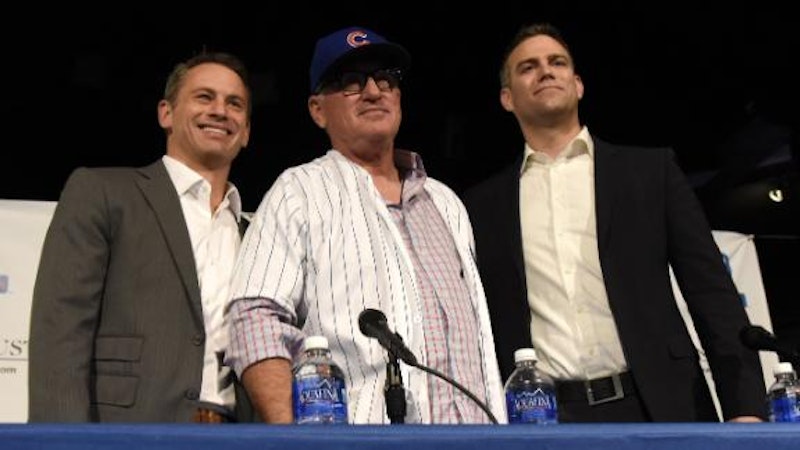 The Cubs made the first splash of the baseball offseason with Monday's hiring of Joe Maddon as the team's new manager. Maddon isn't the top-shelf starting pitcher that Chicago fans have been wishing for but he does bring some funky glasses, a stellar resume, and a pocketful of analytics to Wrigleyville. He also gives the Cubs a front man and public face for their organization-wide rebuilding project.

When Theo Epstein arrived in Chicago following the 2011 season he brought hope and a van of bright and dynamic front office staff along for the ride. Epstein was up front with the public about the club's need to rebuild from the ground up and did his best to temper expectations. As the team has graduated a stream of highly rated prospects to the big leagues, with others on the cusp of promotion, those tempered expectations have washed away. The team has repeatedly pointed to 2015 as the season when the on-field product would be competitive.

Chicago received some criticism in baseball circles for their handling of the Maddon hire. Almost exactly one year ago the Cubs were selling new manager Rick Renteria as the right man to connect to young players. Renteria was still under contract when the Maddon to Chicago rumors started last week. The team mercifully terminated Renteria on Friday. It's unfortunate that a baseball-lifer, and seemingly good man, like Renteria had to be caught up in this situation. The Tampa Bay Rays will do some kicking about Chicago tampering with Maddon while he was still bound by their contract because why the hell not? Tampa likely has no proof that such conversations took place but there's no harm in trying. At worst they waste their breath. At best they may get a draft pick as compensation.

On Monday, with Renteria pushed aside and still on the books for two more years, Epstein and GM Jed Hoyer sold Maddon as the right man to lead Chicago's young talent into the future. It's tough to argue with them. In Tampa, Maddon turned a perennial loser into American League Champions. Maddon has draw some raised eyebrows for his often silly post-game quotes, unconventional lineups, themed outfits for team flights, and critters in the clubhouse but above all he's an accountable and consistent winner who’s loved by his players.

Maddon will now bring his formula to the Northside. He'll be called quirky and a genius. He'll be criticized for spending too much time tasting wines and not enough on fundamentals as soon as the team goes through a losing streak. Through it all Maddon will remain himself. He'll be the bespectacled face of the franchise taking the heat from the press and fans and shielding his dynamic young roster. Anthony Rizzo, Starlin Castro, Jorge Soler, Javy Baez, and Kris Bryant may all one day be good enough to be called the face of the Cubs but Maddon's presence means none of them have to assume such a role before they're ready.

I look at the Maddon hiring in much the same way as Buck Showalter's move to Baltimore. In both cases experienced managers with a winning track record assumed faceless franchises mired in the quagmire of consistent losing. Just as Showalter emerged as the public face of the Orioles, before finally yielding some of that limelight to Adam Jones, expect Maddon to follow a similar path. While some critics often downplay the importance of managers in baseball I think such thoughts are off base. Getting 25 grown men to pull in the same direction and communicate effectively for seven months is much more important than deciding when to bunt or put in a lefty. Maddon's real genius is his ability to make himself the focus of attention and criticism while allowing his players to do their jobs. Of course having Jon Lester or Max Scherzer to front his rotation next season may help Maddon look like even more of a genius.

At the conclusion of Maddon's press conference, which was held in a Wrigleyville bar, the new skipper offered to buy the attendees a shot and a beer. Maddon should fit in perfectly in the world's largest outdoor beer garden, also known as Wrigley Field, but fans hope that soon he’ll be able to trade in the shot glass and beer mug for a bottle of champagne and goggles.