Nothing Beats Father's Day at the Ballpark

Familial bonhomie takes the sting out of another Red Sox loss. 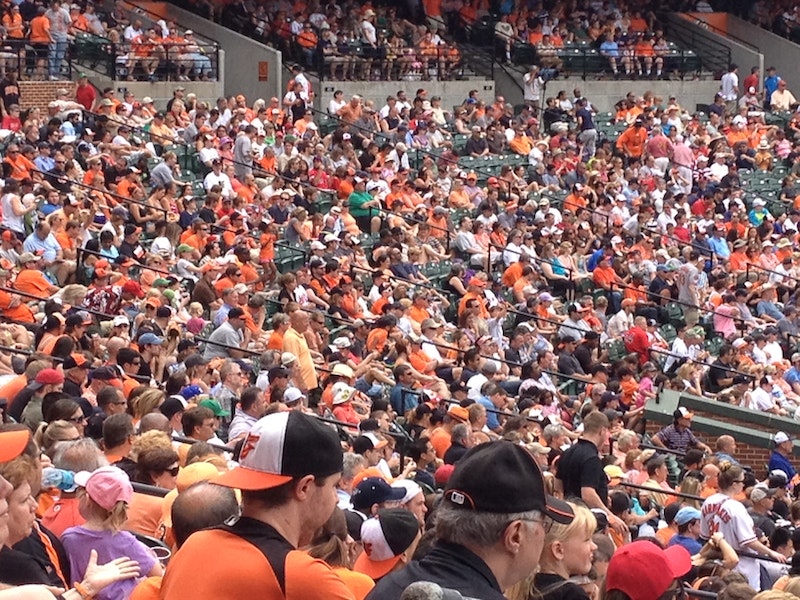 I was fortunate enough to spend the afternoon of Father’s Day with my wife and two sons at Baltimore’s Camden Yards, watching the Red Sox attempt to salvage a series split with the Orioles, and if the results weren’t to my satisfaction (Boston’s Jon Lester, who may finally earn a Cy Young award in a softball league when he’s 50, was dreadful again), well, what’s not to cherish about a splendid day with the family? That alone kept me from a self-induced lobotomy as the Sox played listlessly, Dustin Pedroia out of the lineup, and the who-would’ve-thought power threat Mike Carp leaving the field after experiencing a hamstring injury. (Sox management says it’s no big deal, which means he’ll land on the DL in a few days; no MLB organization dissembles more about its players’ injuries. I can’t even bring myself to think about ace Clay Buchholz’s status.)

Nicky, not a sports fan, but booster of anything Baltimore, including the O’s, treated me to a sour rant around the second inning, commenting that when the Red Sox come to town, the park is invaded by rude rubes from New England, who suck the life out of one of the country’s most friendly stadiums. And it’s true that Sox and Yankee fans are among the most obnoxious—even if partisans prefer “knowledgeable” and “passionate”—characters in the U.S. Take a trip to Fenway Park and make the mistake of admitting you’re not from Boston: you’re likely to be figuratively, sometimes literally, spit on. But sorry, Top Cat, but the era of “Fenway South” is officially over: the Orioles have dominated the Sox for the past two seasons, a fact that’s reflected by the makeup of the crowd (about 41,000 on Sunday). Local fans ruled, and from an objective point of view, it’s about time: during the O’s prolonged (more than a decade) schneid, even if you’re a glass half-full baseball fan, attending a game at Camden Yards was often a desultory outing, and I always felt bad for all the local vendors and bars outside the stadium who’d shuttered from the lack of business.

So, with the O’s battling for the A.L. East Division title—and it’s not premature to say that the Sox’s chances run through Baltimore’s Inner Harbor rather than the Bronx—I don’t mind at all that Oriole Orange dominates the crowd. I’ve no idea why, but we were late in buying tickets for the game (just a week ahead of time), forgetting that it was Father’s Day, and wound up in Section 27, way in the back where the overhang obscured fly balls and the scoreboard, so much so that TVs are hung so that people can see all the action. In truth, our seats were quite similar to much of Fenway, although they’re less cramped, and for someone who weighs 155 lbs. it's quite comfortable.

Mercifully, the TV sound was off, so I was spared the indignity of baseball’s worst play-by-play announcer, MASN’s Gary Thorne, a fellow who bungles facts, stumbles on words, says “Adieu!” after each game and is a master of mispronouncing players’ names. Fine, the Yankees’ YES propaganda frontman Michael Kay is awful, but at least he’s quite articulate, and when the Yanks are losing can be somewhat entertaining; and unlike the rest of the country, I don’t get agitated by the White Sox’s self-parody Hawk Harrelson, since he’s unintentionally pretty funny.

As for the game itself, is it unkind to wonder whether O’s MVP candidate “Crush” Davis is crushing some unknown substance (maybe he’s buddies with the Jays’ Jose Bautista and Edwin Encarnacion) that’s turned him into the offensive equivalent of Josh Hamilton from just a few years ago? Davis blasted a homer off Lester to right field in the third inning, then, seemingly at will, flicked a double to left later on to ice the game. Maybe that’s not fair, maybe Davis is just a late bloomer who wasn’t given the right opportunities with other teams, but from this corner it’s a little suss. Mind you, as I’ve written before, in my opinion all PED’s ought to be legal, but as long as they aren’t, why not play the guessing game? If you’re a Sox fan, a highlight of the season—no, make that this decade—would be if His Eminence Derek Jeter or Robinson Cano were nabbed as “cheaters.” I swear half the MLB TV announcers and pundits (here’s to you, ESPN’s Buster Olney) would dirty their pants if such a revelation greeted them one early morning.

Well, with that pigskin-size lump of bile out of my system, here’s hoping the Sox figure out their starting pitching problems (not to mention an overtaxed bullpen and the white-knuckle closer Beetle Bailey), maybe pry Cliff Lee loose from the below .500 Phillies, beef up and never relinquish their slim A.L. East lead, and, finally, that NESN veteran Jerry Remy recovers from his latest ailment and is back in the booth with Don Orsillo soon.