The best of the minor league recruits. 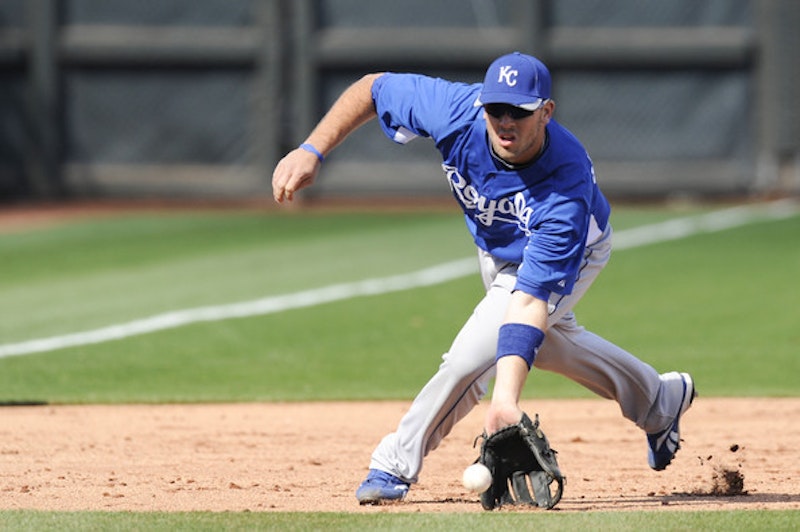 The recent trade of Kevin Youkilis from the Red Sox to the White Sox signaled the end of an era in Boston. Youkilis was one of the few remaining members of the Red Sox team that won the 2004 World Series and ended 86 years of New England madness. The skids for Youkilis’ departure were greased by the impressive play of young third baseman Will Middlebrooks.
The Red Sox recalled Middlebrooks in early May when Youkilis went down with an injury. The 23-year-old Middlebrooks clearly had no intention of returning to Pawtucket. After four games in the big leagues Middlebrooks had slammed three homers and knocked in nine. He hasn’t stopped hitting since. In 43 games with the Red Sox, as of June 27, Middlebrooks has slammed nine round-trippers, driven in 36, and posted a .923 OPS. By comparison Youkilis had just four home runs and 14 RBI in an almost identical number of at bats. Boston isn’t the only American League town where a young third baseman is providing an offensive boost.

The Kansas City Royals are still trying to build a winning ball club. The latest group of promising youngsters includes first baseman Eric Hosmer, Triple-A outfielder Wil Myers, and third baseman Mike Moustakas. Moustakas, 23, debuted with the Royals last June. He was the second overall pick in the 2007 draft and rocketed through Kansas City’s farm system. He struggled to adjust to the Major Leagues after his promotion. Moustakas had just five home runs and 30 RBI in 338 at bats for the 2011 Royals, but has re-discovered his power stroke in 2012. He’s already hit 12 home runs and knocked in 37 runs in 253 at bats this season.

Kyle Seager’s arrival in the big leagues didn’t come with the expectations or fanfare of Moustakas and Middlebrooks. Seager was the third round pick of the Seattle Mariners in 2009 out of the University of North Carolina, and shot through the Mariners system quickly because he was versatile and one of the best hitting prospects for an offensively inept franchise. Seager played three infield positions for the Mariners after being recalled in July of 2011. After hitting just three home runs in 53 games as a rookie Seager has emerged as one of Seattle’s most dependable weapons in 2012. He has 19 doubles and 10 home runs in 259 at bats this season. Seager’s long-term worth may be limited due to his disappointing .311 career OBP but at just 24, he has plenty of time to progress.

The Blue Jays acquired Brett Lawrie from the Brewers prior to the start of the 2011 season in exchange for starter Shaun Marcum. Lawrie was thought o be an excellent offensive prospect but his attitude and defense needed some work. Marcum went on to help lead the Brewers to their first National League Championship Series. Lawrie did his part by emerging as one of the American League’s most dynamic rookies in the closing months of the 2011 season. After posting a .953 OPS in 43 games in 2011 Lawrie has regressed at the plate in 2012, although a recent hot streak has improved his OPS to .768. Lawrie has already made 10 errors at third base this season but advanced defensive metrics tell a different story. Lawrie’s defensive WAR for the 2012 season is a staggering 3.5, which could either mean dWAR is severely flawed or the official scorer in Toronto needs some new bifocals. Either way the 22-year-old looks to be a solid player for the Jays for years to come.