A-Rod wasn't the only one to blame. 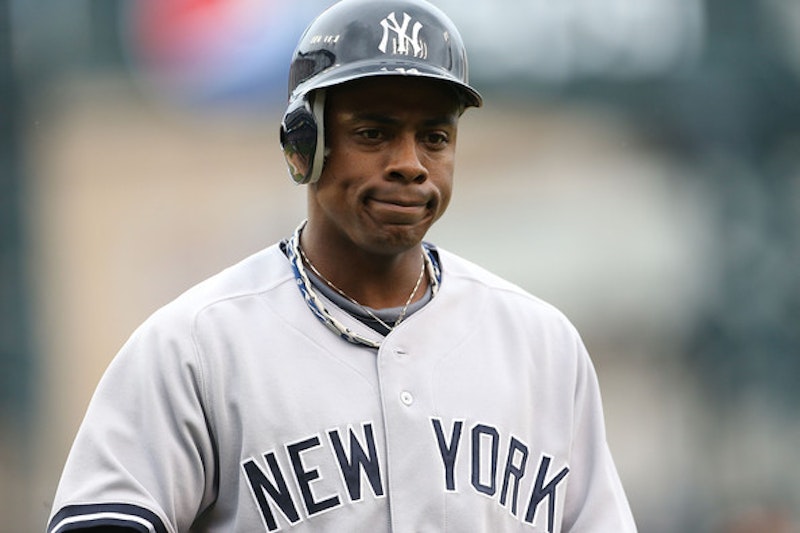 At the conclusion of the 2009 baseball season Curtis Granderson was a 28-year-old All- Star center fielder for the Detroit Tigers. Granderson had signed a five-year contract extension worth more than $30 million following the 2008 season. He appeared to be the Tigers long-term solution in center field.

It came as a surprise when Detroit dealt Granderson to the New York Yankees in a three-team trade in December, 2009. What appeared to be another instance of the rich getting richer has yielded huge dividends for the Tigers.

Detroit received Phil Coke and Austin Jackson from the Yankees, and Max Scherzer and Daniel Schlereth from Arizona, in the Granderson deal. When the Yankees and Tigers squared off in the ALCS earlier this week Jackson hit leadoff for Detroit while Granderson batted eighth for the Yankees. Jackson, the former top Yankees' prospect, posted a career high .856 OPS this season at the age of 25. Jackson's .377 OBP made him the perfect table setter for Detroit's powerful duo of Miguel Cabrera and Prince Fielder. Meanwhile, Granderson's OBP sunk to .319 this season, causing Yankees' manager Joe Girardi to move him down in the batting order despite 43 regular season homers.

When closer Jose Valverde blew a four-run lead in Game 1 of the ALCS, following a similar disaster in Game 4 of the ALDS versus Oakland, Tigers' manager Jim Leyland turned to lefty Coke to protect his next late inning lead. Coke came to the Tigers at the age of 26 with one full big league season under his belt. The former Yankee emerged as Leyland's savior this week recording two saves and striking out four in 3 2/3 innings in the ALCS.

Scherzer, 27, put the finishing touches on Granderson and the Yankees on Thursday afternoon. Scherzer's been a solid performer since coming to the Tigers but he broke out in 2012. The right-hander went 16-7 with a 3.74 ERA and a career high 231 strikeouts. Scherzer averaged over 11 strikeouts per nine innings to lead the American League.

While Scherzer, Jackson, and Coke were doing their best to push the Tigers to a World Series appearance, Granderson scuffled. Though much of the criticism for New York's lackluster postseason offense was heaped upon Alex Rodriguez there was plenty of blame to go around. Robinson Cano and Nick Swisher were shadows of their normal selves. Joe Girardi panicked and benched several of his best players, including Granderson. The former Tiger went 0-for-11 with seven strikeouts in the series. It's been nearly three years since Granderson packed his bags for New York but the trade just keeps giving to Detroit.