Ray Allen Shoots Down the Celtics 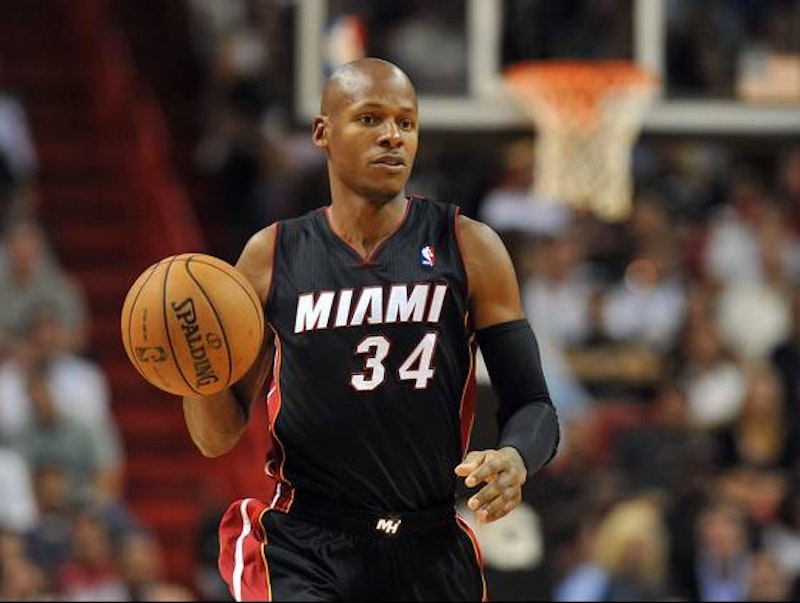 The Miami Heat began the defense of their NBA championship on Tuesday night with a 120-107 victory over the Boston Celtics. The game also marked the first regular season game with the Heat for newcomer Ray Allen. The veteran shooting guard scored 19 points in 31 minutes against his former team.

Allen joined Miami as a free agent in the off-season after spending five seasons with Boston. The Heat defeated the Celtics in the Eastern Conference Finals and added insult to injury by signing Allen just weeks later. Allegedly upset after the Celtics attempted to trade him prior to last season's trade deadline, Allen paid a visit to the Boston bench before Tuesday's tip-off to exchange handshakes but was snubbed by former teammate Kevin Garnett. The bad blood carried over to the floor as Celtics point guard Rajon Rondo grabbed Heat guard Dwyane Wade around the neck on a hard fourth quarter foul. Officials quickly diffused the situation but Rondo is quickly gaining the reputation of being a punk and a sore loser, who apparently has a hard time dealing with losing to Miami.

Miami signed Allen to a one-year contract, with an option year, to hit open jumpers and create floor space for LeBron James and Dwyane Wade. Allen did his job on opening night as he went 5-for-7 from the floor including 2-for-3 on three point attempts. Allen also went 7-for-8 from the free throw line and added two assists and two rebounds. Miami took a 62-54 lead at halftime thanks to a strong first half effort from LeBron James. The Heat built a commanding lead before James left the game in the second half with leg cramps.

James, who was also hampered by cramps during the playoffs, may want to seek an endorsement deal with Vitamin Water. His departure resulted in increased minutes for Allen. The 37-year-old Allen likely won't log 30 minutes on a nightly basis this season. The presence of outside shooters Shane Battier, Mike Miller, and James Jones should allow Heat coach Erik Spoelstra to effectively manage Allen's minutes throughout the season. I wouldn't be shocked if Allen sits out some regular season games as Spoelstra attempts to conserve the veteran shooter's legs for the postseason. After all, Allen came to Miami to win another ring, not put up gaudy regular season stats.

Boston made a late run with James in the locker room getting treatment before Chris Bosh closed out the game for Miami. Bosh finished the game with 19 points, 10 rebounds, and three blocks. Miami also benefitted from a remarkably effective debut from forward Rashard Lewis. The onetime Orlando Magic star signed a two-year free agent contract with Miami during the offseason. Lewis, like Allen, was brought to Miami to hit open three pointers and help spread the floor, and chipped in 10 points, five rebounds, and a block in 19 minutes in his Heat debut. Lewis was 4-for-5 from the floor including 1-for-2 from beyond the three-point line. Lewis, 33, battled through three injury-marred seasons with the Magic and Wizards before heading to Miami.

The Heat’s roster has been a work in progress since Pat Riley brought the big three of James, Bosh, and Wade together in the summer of 2010. Mike Miller has battled injuries and ineffectiveness since coming to Miami two years ago. Shane Battier was a valuable defensive presence last season but struggled on offense shooting a career low 38.7 percent from the floor. The additions of Allen and Lewis should strengthen the Miami bench and give Spoelstra the depth to combat the injury history of Miller and the shooting struggles of Battier. James is expected to see more time at power forward this season with Bosh playing center, leaving the small forward spot open for one of Miami's sharpshooters. Riley's offseason additions give Spoelstra a plethora of combinations on both offense and defense to help the Heat ward off a bitter and aging Celtics squad for Eastern Conference supremacy.