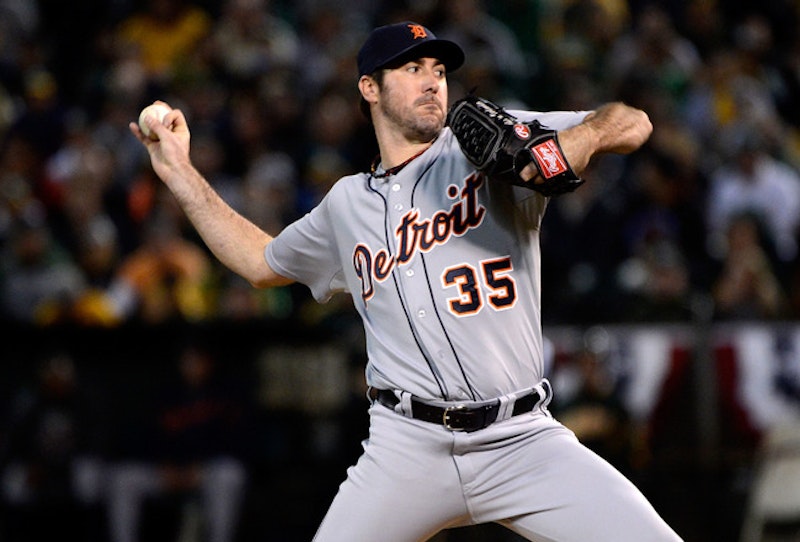 While the bean-counters at Fox may be disappointed in the World Series matchup featuring the Detroit Tigers and San Francisco Giants there are compelling reasons for even casual baseball observers to watch.

The Giants have been living on the edge throughout the postseason, overcoming a two games to none deficit against Cincinnati in the NLDS and a three games to one hole in the NLCS against St. Louis. San Francisco has been going with a closer by committee approach since Brian Wilson was lost to elbow surgery earlier this season. While Sergio Romo has emerged as Bruce Bochy's go-to guy in the playoffs the Giants' manager will not be shy about mixing and matching in the late innings. Detroit closer Jose Valverde was so bad in successive outings against Oakland in the ALDS and the Yankees in the ALCS that he lost his job. Tigers' manager Jim Leyland went with lefty Phil Coke to close out the Yankees but he'll need Valverde or Joaquin Benoit to regain their regular season form to combat right-handed batters Marco Scutaro and Buster Posey.

Verlander, a 29-year-old workhorse has become appointment television this October. Verlander entered these playoffs with a checkered postseason history. He's removed any doubts about his big game abilities with three stellar starts against the Athletics and Yankees. In three games this postseason Verlander has allowed just 10 hits and two earned runs in 24 1/3 innings. He's fanned 25 while walking just five. In what appears to be an epic mismatch, Verlander will battle Barry Zito in Game 1 on Wednesday night.

Zito has been the subject of much ridicule since signing a staggering seven-year $126 million deal to join the Giants in 2007. To say that Zito failed to deliver on expectations would be an understatement. In six seasons with San Francisco, Zito is just 58-69 with a 4.47 ERA. In fact, when the Giants won the World Series in 2010 Zito wasn't even on the playoff roster. Zito is no high paid spectator this postseason. The veteran lefty was stellar in NLCS Game 5 last Friday as he extended the Giants' season and brought the series back to the Bay Area with 7 2/3 innings of shutout ball and a perfect RBI bunt single.

Leyland and Bochy are a pair of crusty, cranky baseball lifers. They look like they're right off the cast of Dangerous Catch. As managers Leyland and Bochy have the kind of equity that only comes with a World Series ring. The two veterans have carte blanche to run their teams as they see fit. Bochy didn't have to ask permission to send Tim Lincecum to the bullpen and Leyland didn't hesitate to demote the struggling Valverde. Bochy and Leyland will be faced with tough decisions in the World Series and they won't crack under pressure.

Buster Posey is the likely winner of the National League MVP award. Just a season removed from a horrendous leg injury, the 25-year-old backstop led the National League in batting and went on a second half tear following the suspension of Melky Cabrera. Posey, just 8-for-45 this postseason, will need to solve Detroit's pair of hard-throwing righties Verlander and Max Scherzer.

Miguel Cabrera won the Triple Crown this season and is expected to battle Angels' outfielder Mike Trout for the MVP award. Cabrera continued his hot hitting in the ALCS sweep of the Yankees scoring three runs and knocking in four. Cabrera last appeared in the World Series as a 20-year-old rookie with the Florida Marlins in 2003. After going just 4-for-24 in the 2003 Series, Cabrera will no doubt look to get off to a hot start against the Giants.

So, while Fox is lamenting the fall of the Yankees and the new Mr. October (Carlos Beltran) and the Cardinals coming up short, do yourself a favor and enjoy watching some of baseball's best players and managers square off the declare a champion. The MLB playoffs have been full of white-knuckle drama to this point, so here's hoping the trend continues for another week.