The Redskins Are Geniuses, Also Idiots

I've said it before, it's all about defense. 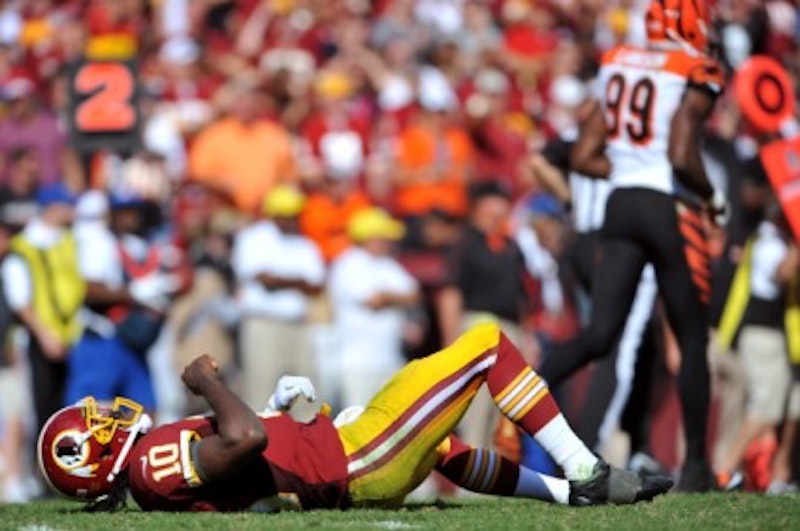 When the Redskins traded three first round picks including last year’s fifth overall and a second rounder to move up three spots and select Baylor quarterback Robert Griffin, III, I called up my brother. I don’t remember my exact words but they were along the lines of these four thoughts:

Six games into the NFL season and I still think it was a stupid trade. But it was also a stroke of genius. The reasons I initially disliked the deal were all correct. It does show a fundamental misunderstanding of draft pick value, and shockingly so for a team as bereft of talent as the Redskins. Desperately in need of talented players, the team will be missing the contributions that those three high draft picks could have provided for years and years to come.

What I failed to consider is the possibility that Griffin would immediately be one of the best quarterbacks in football and transform the team from one of the league’s worst offenses to one of its best. So I whiffed on that one. The Redskins have scored the second most points in all of football, 10 points behind the New England Patriots, and if Washington had had a league average kicker they would be first. That after finishing 26th in points scored last season. It’s not like the team went out and added a bunch of other talent to make it easier on him either, because the only addition of consequence to the offense was Griffin.

What’s more, Washington is scoring all those points with a rookie quarterback. Quarterback is the most difficult position to learn in pro sports. It’s like being the pitcher of a baseball team, but starting every single game. Some great quarterbacks have the benefit of sitting on the bench for a few years (Tom Brady and Aaron Rodgers come to mind), but when you pluck a quarterback right out of college and hand him an NFL starting job, things can get rough, even for Hall of Fame quarterbacks. Troy Aikman went 1-15 during his rookie season with the Dallas Cowboys. Peyton Manning didn’t do much better, leading his Indianapolis Colts to a 3-13 record. You could say that both guys were handed terrible teams, but you can also make that case for Griffin, whose Redskins finished 4-12, 6-10, and 5-11 over the last three seasons.

Here’s the great thing for Redskins fans, and the part that I failed to consider in my instant analysis of the trade. The best quarterbacks are always on winning teams not because of the talent around them but because that’s how good they are and that’s how much they matter. Teams without great quarterbacks can win, but teams with great quarterbacks always win. Look at the same group of guys in Manning, Aikman, and throw in Rodgers and Brady too. Those guys are a combined 449-225 over 43 seasons of quarterbacking. That’s a .666 winning percentage which essentially means you win two of every three games, or between 10 and 11 games per NFL season. The last time the Redskins won 10 games was 2005. The last time they won more than 10 was 1991.

Griffin is a rookie, but he’s playing at such a high level already that to be a huge success doesn’t require him getting better. He probably will get better, but he doesn’t have to. In the modern NFL, good quarterbacks have completion percentages over 60 percent. Griffin’s completion percentage is 70 percent. Good quarterbacks are mobile. Griffin is a running back at quarterback. If you haven’t seen him out-run the entire Minnesota Vikings defense last weekend, watch it here.

Right now the Redskins defense is awful. I mentioned before how Washington is second in all the NFL in points scored, but they’re also 28th in points allowed. They’ve scored five more points than they’ve given up, meaning their defense essentially turns every offense they face into the second best offense in the NFL. That’s not Griffin’s fault, but because of all the draft picks the Redskins traded to get him, it’s going to be his problem. However, it won’t last forever. If the Redskins can keep Griffin healthy and signed, eventually the defense will reach the NFL average, and that’s when the Redskins can really start winning some games.