The Orioles Need An Aggressive Off-Season

If Baltimore wants to continue its feel-good story, new pitchers are key. 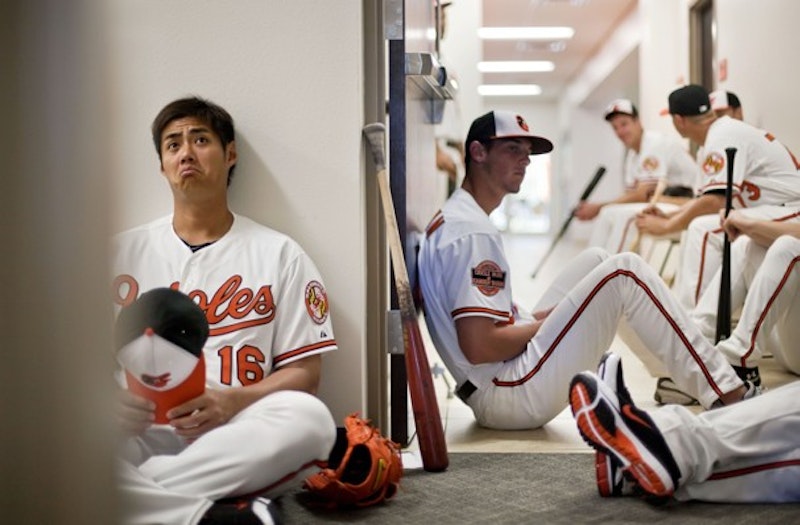 I’m still amazed that the Orioles made the playoffs, since they weren’t that good of a team. Maybe that’s curmudgeonly, but despite their spectacular record, Baltimore fielded only an above average team in 2012. The numbers don’t add up. How can a team make the playoffs with such awful starting pitchers? Jason Hammel (and all of his 118 innings pitched) surprisingly pitched like an ace. After him, however, they had nothing consistent except Wei-Yin Chen and his 4.42 FIP. Miguel Gonzalez and Chris Tillman astonishingly bowled over the competition in the last two months of the year… where did they come from? Maybe the team practiced some Pedro Cerano-like voodoo, or maybe they just got lucky. So, how do the O’s repeat next year?

It’ll be difficult. The rotation is in shambles. For some perspective: the Red Sox are better off than the Orioles in regards to starters. The O’s bullpen, although fantastic in 2012, is a bullpen. By that, I mean it’s volatile. Relievers are relievers for a reason. They are either injury prone, inconsistent, or unskilled. The greats like Mariano Rivera or Trevor Hoffman are the obvious exceptions. The offense, too, might appear set, but it’s not. It never is. Let’s start there.

Second base could use improvement. There aren’t many options available on the free agent market. Kelly Johnson appears to have the most upside. The problem is he’s coming off another bad year with far too many strikeouts. GM Dan Duquette could get creative, though. JJ Hardy or Manny Machado could ostensibly play second for 2013, which would free up a spot at the hot corner. Veteran Kevin Youkilis wouldn’t need more than a $10 million, one-year deal to land with the Birds. That’s an unlikely scenario, however. Second base will probably wind up being an offensive black hole yet again.

But fear not, Baltimore can deal with a lame hitting second baseman since the outfield market is so deep. With Adam Jones and Nick Markakis already penciled in for 2013, Duquette has room for just one outfielder, and that’s assuming he doesn’t hand the job outright to Nolan Reimold. And he shouldn’t: Reimold may be cheap, but he’s anything but proven. The 29-year-old still hasn’t put together a full MLB season. So many outfielders are available. Some will get overpaid (Nick Swisher, B.J. Upton), and some will get pillow contracts because they were greedy and waited tool long to sign (maybe Shane Victorino, Angel Pagan, definitely Melky Cabrera, but for different reasons). “Pillows” are generally great signings because players are extra motivated to win long-term, big money contract their second time around free agency. The O’s DH slot can be improved, too. Jim Thome won’t return; it’s for the best. There is, however, another veteran DH on the market with more star power than Thome: David Ortiz. Yes, the Red Sox will likely resign their franchise player after a lot of grumbling from each side. But if the Orioles swoop in with a two-year offer, around $30 million let’s say, it’d be hard to imagine Big Papi turning it down. Certain things would need to happen in order for Ortiz to actually reach free agency, though. I’d put it as 50/50 that he hits the open market.

Pitching is the important issue, though. Really, the only holdovers from the 2012 rotation should be Hammel and Chen. Way-out there, crazy prediction: Chen will not be nearly as good in 2013. The market for starters isn’t nearly as bare as some pundits are saying. Sure, there aren’t many aces available, Zack Greinke being the only legitimate number one, but reliable, durable innings eaters are fairly abundant. Anibal Sanchez has pitched over 195 innings in each of the last three seasons, and thanks to a string of horrible starts after being acquired by Detroit (we can blame them on league adjustment), he won’t be too expensive. I can’t see the right-hander getting more than $60 million over five years.

Hiroki Kuroda has proved dependable, too, and in the AL East of all places. The Japanese right-hander may be old, but he sure isn’t finished. A two-year deal with a $12-14 million AAV would be well worth it. Let’s get back to the topic of “pillows,” as there are bound to be a couple hurlers still searching for a team in February. Dan Haren, Edwin Jackson (he won’t get a long-term deal until he’s played for every team in MLB), and Brandon McCarthy will be looking to re-establish their value. Jackson seemed primed to finally land a three- or four-year commitment before a shaky September and awful NLDS. Haren will undoubtedly entertain multi-year deals, but if he wants something in the $60-70 million range, he needs to have another dominant season. McCarthy just needs to prove he’s healthy.

The O’s need pitching so badly that the only fix is to go out and sign a bunch of free agents. Generally, that’s the worst advice you can give, but Duquette doesn’t have many other options. Aside from Machado and Dylan Bundy, who are completely untouchable, Baltimore doesn’t have many prospects to entice a rival team into a trade. If owner Peter Angelos wants to make the playoffs again, he needs to open up his wallet.