Are the Red Sox Out of It?

No, but who can blame people for thinking they are? 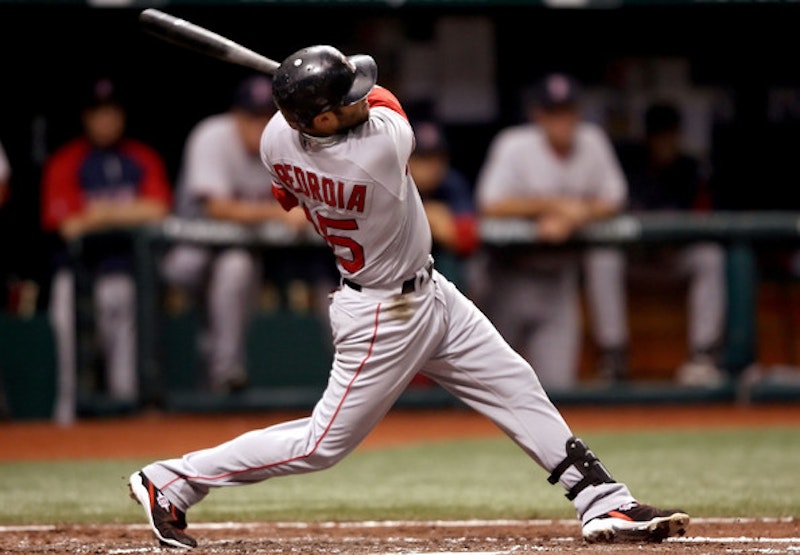 Fan sentiment to the contrary, the Red Sox can still make the playoffs. That may seem like an obvious statement since the team is only 6.5 games behind and it’s just June, but the Boston media would like you to think otherwise. The recently anemic offense finally looked alive last night in a 10-2 win against Miami, and the pitching staff is starting carry their weight, so it’s not over yet. Not by a long shot.

The front office might disagree with me, though. The AL East has gotten even more crowded with the sudden emergence of the Orioles (they’ll fall off soon) and the ever-increasing presence of the Blue Jays. The Sox are getting older, and while the team is still effective, they’re incredibly inefficient. Considering the bloated payroll, you’d think Boston would be in first place. Additionally, one thing is clear: if the Red Sox do see October play, which is still possible, I doubt they’d make it past the first round.

The Red Sox are not out of the race, but you do have to ask yourself: is it worth it?

Peter Abraham of Boston.com made a great point the other day, saying “If on Aug. 1 the lineup included [Will] Middlebrooks, Ryan Kalish, Jose Iglesias and Ryan Lavarnway, would you care more or less about the team than you do right now? The guess is you would care more. A lot more.”

He’s right: a showcase of Boston’s young prospects would be more exciting than a possible (and ultimately fruitless) playoff berth. This team has so many valuable trade chips that could seriously bolster the team for next season. Kevin Youkilis (he’ll probably be gone by the end of the week), Cody Ross, Mike Aviles, and the majority of the bullpen could net minor prospects in potential deals, or could be add-ons to bigger trades. With Josh Beckett’s consent and the club’s willingness to eat a portion of $31.5 million owed to the right-hander over the next two years, he could be a highly desired commodity on the thin trade market. If the Sox truly want to make a splash and improve the team’s chances next season by acquiring impact prospects, however, they’ll have to deal players once considered “untouchable,” like one of Clay Buchholz or Jon Lester, David Ortiz, and Jacoby Ellsbury (once he returns from the DL. An offseason deal might be more appropriate).

The only player I would consider completely off-limits is Dustin Pedroia, the heart of the team. Although he’s still under contract through 2015, Boston should extend their second baseman and save a lot of money going forward. Pedroia has already shown a willingness to sign a team-friendly deal and has expressed his desire to remain with the club for the entirety of his career.
For the first time in more than three years, Boston’s farm system is plentiful again. Still lacking upside talent in the higher levels, the Salem and Greenville teams are exploding with promise. SS Xander Bogaerts, RHP Matt Barnes, and CF Jackie Bradley, Jr., of Salem, are primed to lead the club in a new direction once they get the call, which admittedly won’t be until 2014 at least. Their teammates Brandon Jacobs and Sean Coyle also have high ceilings. One level lower are LHP Henry Owens, C Blake Swihart, SS Jose Vinicio, and 3B Garin Cecchini, who represent the other half of Boston’s now stacked minor league system. Summer trades would improve the farm even more.

Yes, the Red Sox still have hope. They can still win. But should they? At this point in the season, when the team looks tired and discouraged, it’s easy to give up. If they suddenly turn it around and start looking like the club most pundits predicted they’d see, then run with it. If the front office thinks they have a legitimate shot at another World Series title, go for it. But if they don’t, if they’re just going through the motions to maybe win a Wild Card spot, and maybe make it past the first round, then what’s the point?