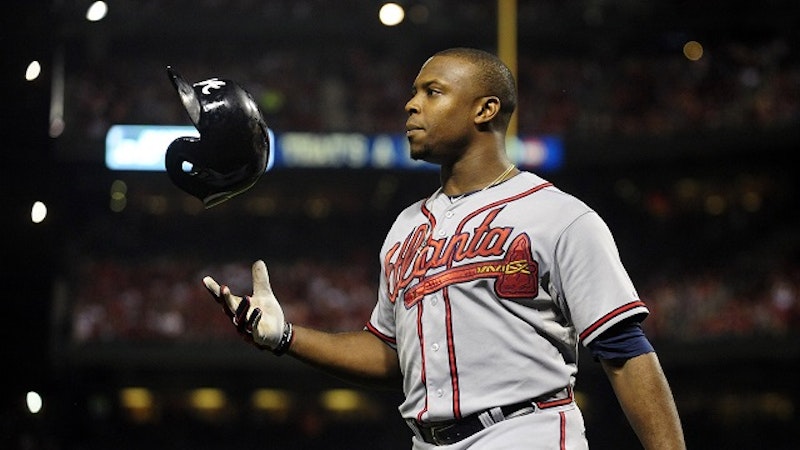 The Nor’easter of trades that’s enveloped strange Sunbelt franchises such as the San Diego Padres and Miami Marlins must be baseball’s version of climate change. Never mind the subterfuge transpiring on the polar caps of the Windy City ballclubs. It’s time for the reclined Padres fans have to ask if they really want to squint through the blaring sun from that Guantanamo-style adult sandbox cheering area beyond the fences of Petco Park (realizing after the fact that Justin Upton is not Brian Giles) and watch as Upton shows up yet another home plate umpire. With each called strike Upton does everything but file a grievance with the player’s union. Apparently he has channeled Wade Boggs and Pete Rose and Ichiro with a collective ownership and celestial knowledge of the strike zone despite his lack of statistical credentials. Even with his team up 6-0 in the eighth, two out and nobody on, the ex-Brave and two-time All-Star will still dispute a called strike on the inside corner with the aplomb of a ninth grader trying to talk his way out of detention. It is most annoying and hard to watch.

The Padres still have a minimalist pitching staff and have to face Madison Bumgarner and Clayton Kershaw every third Thursday of the season as part of their NL West penance. Matt Kemp will need a cortisone jock strap to keep his arthritic hips nimble while he battles Upton and erstwhile Tampa Bay Ray Wil Myers for all the attention in an outfield overload that will turn everyone into Alexander Haig when it comes to San Diego’s chain of command. With the size of the Petco Park outfield, perhaps five fielders will be the norm in 2015? And who needs outfielders who can catch? Nah, it is all about volume and behaving like the Toronto Blue Jays a few offseasons ago when they suddenly had all the answers.

San Diego hasn’t had this much attention since that guy shot up the McDonald’s on the Mexican border several years ago. This whole first-year hyper driven youthful GM storyline is getting kind of old. The recent Padres publicity shitstorm makes me long for the bygone Chris Denorfia era of Swingin’ Friar ham 'n’ eggers.

When the MLB transactions column heats up as college and pro football plod toward their awkward climaxes and NBA stars bicker with owners and NHLers revive childhood diseases, the feeling is that all these trades are merely the brokerage of hope and mildly entertaining speculation. Will the shy Garrett Jones melt under the NYC spotlight and take at-bats away from the petulant DH Alex Rodriguez, chased from his third base job by an ex-Padre named Headley? Also curious in a TMZ way as to whom shall be feeding popcorn to A-Rod during the upcoming Super Bowl.

It might be noted the Yankees have surprise for their fans in the acquisition of raw Marlins fastballer Nathan Eovaldi. He is of course unknown to the American League blinder-wearing Yankee fans, so look for Nathan to become the Paul O’Neill of the pitching staff in the Bronx.

If there is indeed hope being thrown around, then, let me hope Cole Hamels’ and his James Michener style “no-trade” list gets optioned for a docudrama on the Oxygen network. Let me hope the soon-to-be underwater city of Miami plots a coup d’état during which one of our new Cuban patriarch pals sends Marlins owner/art dealer Jeffrey Loria and his Masterpiece board game packing, perhaps even extraditing him to Canada where still-seething Expos fans can have at him. Let me also hope Max Scherzer and his David Bowie eyes stay out of the National League, and the Queen of England finally gets around to knighting the Thin White Duke as the New Year beckons.

Baseball fans can now dismiss the wildcard-dominated year 2014 and lean toward a fresh campaign seen in holiday-induced lucid dreaming. One of mine recently included the late Sparky Anderson standing on an oil drum in the Badlands, looking out over a hunched group of wretched middle relievers and reciting William Shakespeare’s "Sonnet 97" that ends thusly:

And, thou away, the very birds are mute;
Or, if they sing, 'tis with so dull a cheer
That leaves look pale, dreading the winter’s near.