Acquisition of Arencibia a smart move. 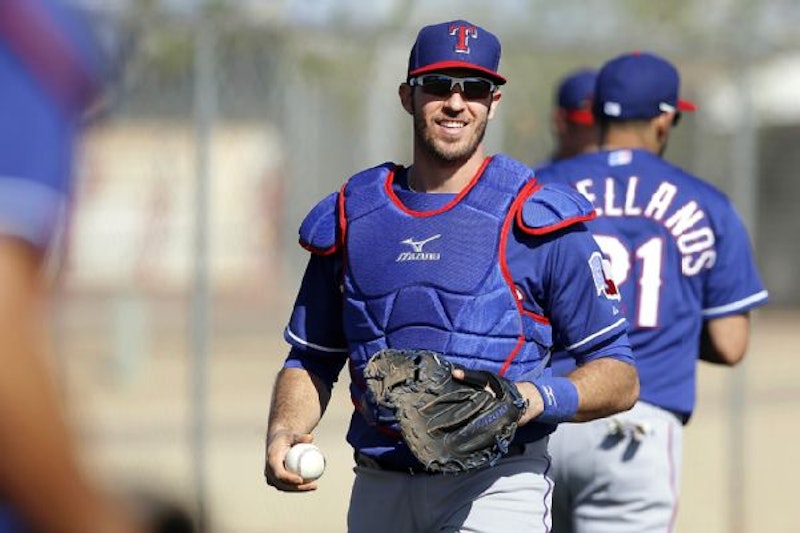 Duquette’s spoken this winter of his desire to add depth behind All Star catcher Matt Wieters. The status of Wieters and his surgically repaired elbow remain a Camden Yards-sized question mark. Baltimore got by in Wieters’ absence last season with the defense of Caleb Joseph and the trade for Nick Hundley. Now with Hundley in Colorado, Joseph will battle Arencibia, holdover Steve Clevenger, and recent waiver claim Ryan Lavarnway for at bats behind, and possibly alongside, Wieters.

Joseph was praised for his pitch framing abilities last season and led the league by catching 40 percent of base stealers. Clevenger’s defensive shortcomings resulted in an extended stay in Norfolk. The Dodgers, then the Cubs, and ultimately the Orioles have claimed Lavarnway off waivers since being cut loose by the Red Sox last month. Arencibia’s career has been on a steady decline after he popped 23 bombs as rookie with Toronto in 2011.

The Orioles clearly have a quantity over quality situation behind Wieters. If Wieters is unable to catch and throw to start the season he may get many of his early season at bats as the O’s designated hitter. It’s likely that Buck Showalter will start the season with three catchers on the roster. Given Joseph’s defensive prowess, Arencibia, Lavarnway, and Clevenger are probably fighting for a single spot.

Lavarnway failed to establish himself over the past four seasons with the Red Sox despite some impressive Triple-A stats. If he fails to claim an Opening Day spot with the Orioles, he could serve as minor league insurance and a potential right-handed hitting designated hitter should Delmon Young falter or suffer injury. Arencibia’s been dismal at the plate over the past two league seasons. He whiffed his way out of Toronto and batted a meager .177 in 63 games for the Rangers in 2014. One thing working in Arencibia’s favor is his impressive performance with Triple-A Round Rock last season. He slugged 14 home runs and posted a .862 OPS in 48 games for the Texas affiliate where he was a pupil of new Orioles’ hitting coach Scott Coolbaugh.

Given the uncertainty of Wieters’ status, the Arencibia signing is worthwhile for the Orioles. Retaining Hundley would’ve been preferable, though financially prohibitive. Arencibia’s recent offensive performances aren’t encouraging (though he has hit well at Camden Yards) but I’m going to assume that Coolbaugh gave a positive report. In the event that Wieters is unable to play to start the season, or has to serve as the designated hitter for an extended period, Arencibia could find himself with an opportunity to jump-start his career. Such a scenario could be disastrous for the Orioles unless Coolbaugh really did correct a mechanical flaw in Arencibia’s game at Round Rock last season.