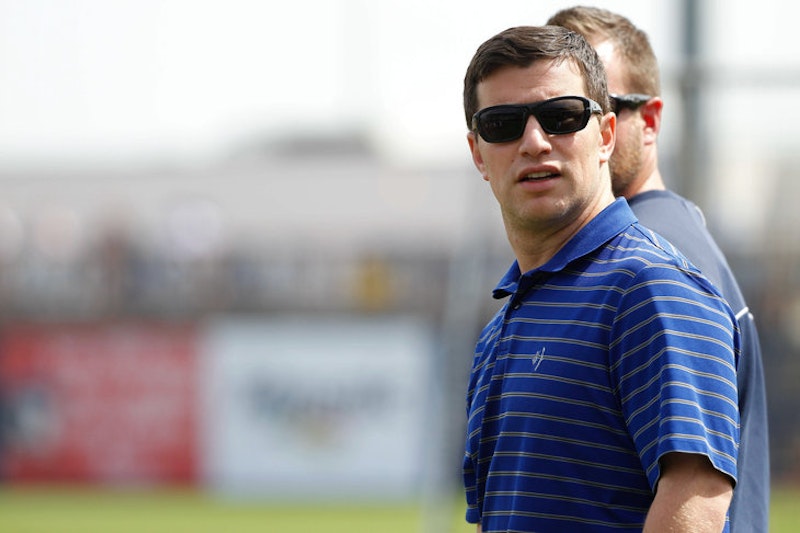 The Los Angeles Dodgers are spending another October at home watching their divisional rivals from San Francisco make a run in the World Series. Rather than jettison manager Don Mattingly, or chalk up their misfortune to the randomness of playoff baseball, the Dodgers made GM Ned Colletti the fall guy and replaced him with Andrew Friedman, the baseball whiz kid who made the Tampa Bay Rays into a contender.

The Dodgers have gone big, loud and expensive since the current ownership group took over in 2012. Despite spending hundreds of millions on free agents, trades and prospects, the Ned Colletti Dodgers failed to make a World Series appearance. Now Colletti gets to slide down the hall to his new role as Senior Advisor while Friedman is tasked with guiding an organization where a World Series is seemingly viewed as a birthright rather than a happy accident.

Friedman delivered the Rays from the basement of the American League to the World Series in 2008. His miracle work didn’t end there. Tampa also reached the playoffs in 2010, 2012 and 2013. The Rays were a resourceful contender that employed brainpower and progressive thinking rather than a fat checkbook and elaborate free agent recruiting pitches to attain success.

Friedman’s exit from Tampa Bay was a long time coming. It has to be tiring running out Logan Forsythe night after night or making the case that José Molina and Ryan Hanigan are viable starting catchers. After being sought after for years, and probably growing tired of Tampa’s still unresolved stadium issue, Friedman rightfully took the money and ran. He’ll have the opportunity to remake the Dodgers organization into a baseball player development factory with the wherewithal to spend big on targeted free agents, much the way Theo Epstein has remade the Cubs. Now that Friedman has the big bank account he must also accept the giant expectations that come with running a marquee franchise that hasn’t celebrated a World Series since Kirk Gibson was a gimpy pinch-hitter.

Friedman’s first order of business will be knocking the Giants off their perch as the standard bearer for success in the National League West. The Giants have become a model organization over the past decade with long-tenured GM Brian Sabean eschewing high-priced free agents (Barry Zito notwithstanding) for a remarkably productive player development system. The core of the San Francisco squads that won the World Series in 2010 and 2012 consisted of home grown players like Buster Posey, Pablo Sandoval, Matt Cain, Madison Bumgarner, and Tim Lincecum. The Giants are at it again this October with former farmhands like Brandon Belt, Matt Duffy, and Joe Panik making an impact.

The Giants are the lone constant in a division that has been in a state of upheaval. The Dodgers have made more headlines for ownership issues than on-field performance during the past five seasons. The Diamondbacks are desperately trying to get back to contention and recently disposed of GM/grit enthusiast Kevin Towers. The Padres and their pop gun offense hired former Texas Rangers’ player development executive AJ Preller as GM to turn the page on a series of unimpressive seasons. Friedman has the experience, brains, and now the funds needed to make the Dodgers into perennial contenders. He can’t make Yasiel Puig or Clayton Kershaw improve their postseason performances but he can continue give the Dodgers October opportunities with a deeper roster and more sustainable payrolls.