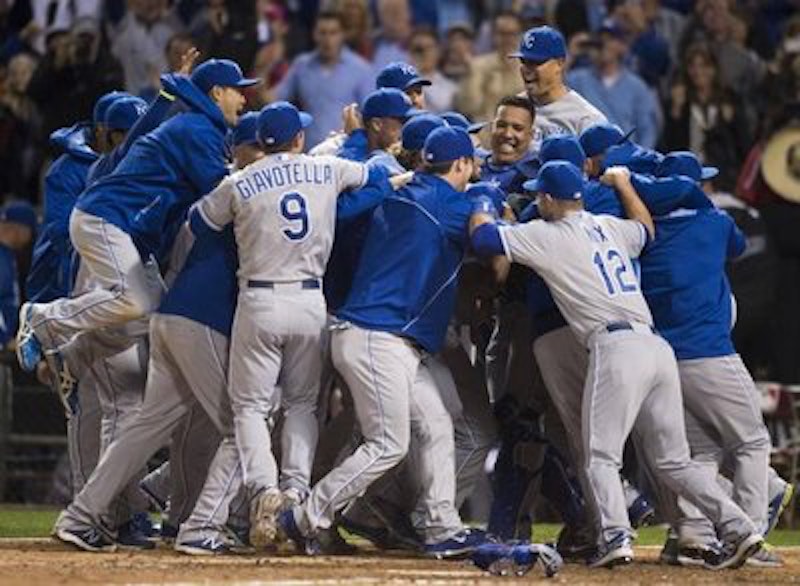 When you put baseball seasons on a shelf sometimes there’s a beneficial side effect when staring at the bookends. Mining the minutiae can pass the time until the next NFL arrest or college football scandal involving Sharpies and BB guns. Looking back you can ask who made the first out of the season? Who made the last out of the season? Did a game last longer than four hours? (If so, stop watching and consult your doctor immediately).

I decided to delve into the scorecards from 2013 for this season’s World Series teams before the dust motes settle. On the surface, the scales kind of tip toward the Bay Area squad originally known as the New York Gothams. The city of San Francisco has earned their Giants away from New York City. San Franciscans are mean and clever baseball fans, they are loyal and knowledgeable when you sit among them. They appreciate good heckling. They survived Candlestick and its sci-fi fog banks and walk among bars like the Kezar Pub and other joints riddled with Dutch doors and goth betties who, like the Giants, relocated from New York.

Looking at the Giants 2013 ledger finds a 76-86 campaign that saw them tied for third with San Diego and 16 back of the first-place Dodgers. The season began on April Fools Day in Los Angeles where Clayton Kershaw got the win in a 4-0 shutout. The first out was made by Angel Pagan, the Giants leadoff man who popped out weakly to Mark Ellis playing second base for the Dodgers. Pagan also did the honors leading off the 2014 season in Arizona, striking out against Diamondbacks starter and eventual Yankee Brandon McCarthy. As for the Giants final out of 2014, well, the future is unwritten and that is why they play this best of seven World Series beginning this week. Pagan’s injured back kept him off the postseason roster for the Giants, and the former Mets pasture-dweller had surgery in late September and is looking at a three-month recovery. His absence and the nervous transplant of Travis Ishikawa from first base to left field had many a cynic dooming the Giants at the onset of October. The Ishikawa Experiment thus far has worked like a Bruce Bochy lucky charm.

The Giants final out of 2013 is interesting since it never happened, essentially, because they won in walk-off fashion in the bottom of the ninth, beating Padres closer Huston Street, who entered to carry out his duties with a 6-5 lead. Giants and Orioles castoff Francisco Peguro led off the inning with a homerun to tie the game. A single, wild pitch, walk, passed ball and intentional walk brought Hunter Pence to the plate with the bases loaded and no outs. He blasted a ball over the head of Padres centerfielder Reymond Fuentes and the Giants won with drama and earned that tie with the Padres. Pence probably celebrated with a one-man Zima shower. The momentum has obviously carried over from that September 29, 2013 victory and propelled this NL Wild Card wonder all the way into the 2014 Fall Classic.

Kansas City’s 2013 campaign was its first winning season since 2003. It began on April 1 against the White Sox at U.S. Cellular Field in Chicago, and it ended September 29 in the very same ballpark. The Royals’ first out of the season was an Alex Gordon groundout to first baseman Paul Konerko. Chris Sale was pitching for the White Sox, and he was behind in the count 1-0 to Gordon, a Lincoln, Nebraska native who has been much-debated in Royals country. Should he bat lead-off or fifth? Should he listen to hitting coach Kevin Seitzer or not? Has his batting eye been blinded by his vast collection of Gold Gloves? The opener last season was a 1-0 loss to Chicago.

The final game of 2013 for the Royals was a 4-1 victory over President Obama’s favorite team. The final out for Kansas City was a fly out to left fielder Alejandro De Aza off the bat of Johnny Giavotella who was supposed to be the second baseman of the future for the franchise. The Metairie, Louisiana native was drafted in 2008 and had several call-ups but Johnny couldn’t hit so he spent most of his days in Omaha and thus the Omar Infante era unfolded for Kansas City.

The Royals first-out bookend for the 2014 campaign was a Nori Aoki groundout to shortstop Alex Gonzalez in Detroit against Justin Verlander. It was 52 degrees on March 31, and this was the first of 19 agonizing games against the Tigers this past season. The Royals would win six of them.

Perhaps the Royals can rise up like the little blue pill sildenafril citrate that has become MLB’s signature sponsor (replacing that evil alcohol known as Budweiser). Many are nattering about the English actress in the new Viagra commercials. She’s kind of a downmarket anti-Bond girl. She’s a 44-year-old soap opera ham and egger named Linette Beaumont, a moniker that sounds like she’s from Giavotella’s Louisiana hood. The images in the Viagra spot are the usual pabulum that looks like the euthanasia film shown to Edward G. Robinson’s character in the brilliant 1973 movie Soylent Green, but with more “verticals” in the frame. There are no cranes or bridge towers in this one. Just one very long dock in the distance of the beach scene.

Meanwhile, on the obscure airwaves of ESPN radio, host Colin Cowherd continues to bash the Kansas City “storyline” decrying the fact they have no .300 hitter, or ace, or brawny home run guy. Cowherd also claims the fans didn’t care in Kansas City throughout the summer, citing sagging attendance numbers and visible empty seats throughout the pennant race. Cowherd, one of a baker’s dozen sad sacks marooned on ESPN and satellite radio mired in ceaseless NFL talk, also said the New York football Giants would beat the Cowboys over the weekend. So much for that. Time to flip the radio dial back to that song that is apparently all about the bass, no treble.