I Hate the Kansas City Royals

An Orioles fan laments and curses. 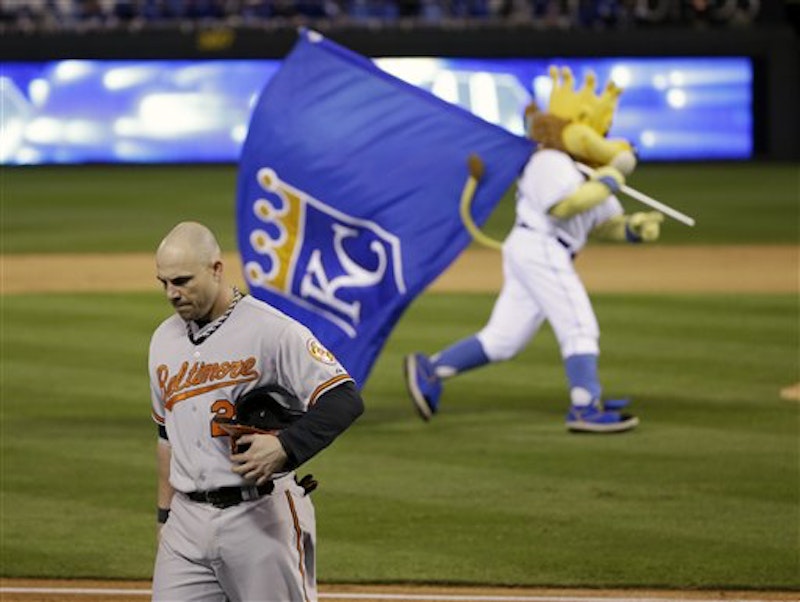 Last week I worked hard to find reasons to hate the Kansas City Royals. They seemed like a cute story. They were harmless. The best thing I could come up with was that the Royals were stealing the Orioles hard-earned pity from the National media. Kansas City fans didn’t have a patent on long-suffering. After three games of the ALCS I’m no longer struggling to find a reason to hate the Royals.

I was seven years old the last time the Orioles won the World Series. I have no recollection of the Series and only faintly remember seeing parade footage on the local news. I’ve been waiting my entire life as a baseball fan, and Baltimore has waited 31 years, for a shot at a title. The fact that this Royals squad with their proliferation of broken bat hits, infield singles, and suddenly productive failed first round picks will keep the O’s out of the World Series may lead me to an institution. Baltimore fans are accustomed to coming up short against the Yankees and Red Sox but not to the Royals. This is a gut punch.

Kansas City scored five runs in Games One and Two off broken bat hits. Surely the Royals luck would run out and they’d eventually start hitting balls at Orioles fielders. Then in the sixth inning of Game Three they were at it again. Lorenzo Cain singled to start the inning because he’s obviously the best athlete to ever play the game. Cain’s base hit was followed by TBS’s Ernie Johnson acting as if the Royals’ center fielder was the second coming of Willie Mays and then another broken bat single by Eric Hosmer. Every Orioles fan, and pitcher Wei-Yin Chen, had the same thought, “Here we go again.” Chen’s frustration was visible as he paced the mound. He’d made two good pitches and somehow allowed two base runners. If only the Orioles had employed a seven-man no-bloop infield. The Royals went on to score the go-ahead run because that’s apparently what they do now. I uttered nearly all of the curse words I had learned since the Orioles’ last World Series parade.

As the Orioles go into Game Four unfathomably down three games to none with the season on the line, I hate the Royals. Not some trumped-up hate just for the sake of rooting against them but the kind of burning hate that can ruin your week, or month. I’ll have a good laugh in April when James Shields is pitching for the Dodgers, Lorenzo Cain wakes from his dream, and Mike Moustakas is hitting .185 but right now none of this is entertaining.

I’m also pretty cheesed at the O’s for making me hate the Royals. At any point in the past 29 years I would’ve been ecstatic to see the Royals have this kind of postseason success. The Royals and Orioles were like dueling doormats of the American League for most of the last quarter century. The Orioles’ complete ineptitude in this series has robbed me of enjoying the Royals’ remarkable run. Damn you Adam Jones and your insistence on swinging before the pitcher even releases the ball.

The Orioles’ season is over. Yes, they could theoretically win four consecutive games to topple Kansas City, but it’s highly unlikely. The team looked totally defeated as soon as the Royals took the lead in the sixth inning of Game Three. Even Buck Showalter seemed to accept the inevitable when he allowed Ryan Flaherty, Nick Hundley, and Jon Schoop to hit for themselves against KC’s stellar bullpen despite favorable bench options.

After waiting 17 years just for the Orioles to get back to this point I know these opportunities don’t occur very often. Yes, the Orioles will be poised to make another run next season with Manny Machado, Matt Wieters and Chris Davis back in the fold but to come this close only to fall on their faces is painful to watch. To have it happen against a team on the most remarkable streak of good luck I’ve ever witnessed is infuriating. Losing in the playoffs sucks. It doesn’t suck as much as losing for 14 straight seasons but it still sucks.