Aviary Battle: A Preview of the American League Wild-Card Game

Jays win in a slugfest. 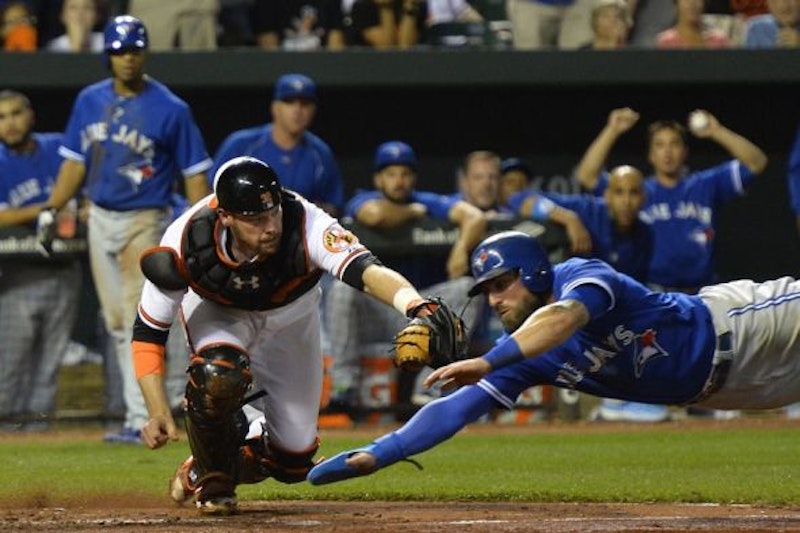 Baseball’s 2016 regular season may now be written about in the past tense, for on Tuesday night, a post-season baseball game will be played at the Rogers Centre (Skydome!) in Toronto, Canada. Baseball fans in Ontario will be thankful their team salvaged this appearance after a wobbly 13-16 September ended with two wins at Fenway Park against the already-clinched Red Sox. After tasting the thrill of October success last year, Blue Jays fans won’t be feeling the baseball equivalent of blue balls after inching past Detroit and Seattle for one of those coveted wild-card spots. In a matchup of American League East rivals, the Baltimore Orioles will provide Toronto with a home run-hitting, strikeout-prone opponent.

What might we expect in this notorious “coin-flip” (a derogatory term used by baseball purists who aim to highlight the arbitrary nature of a one-game playoff) game of Eastern division gentlemen? Who knows?

The starting pitchers have not yet been named, but here’s a guess: they’ll both be 32-year-old men who hail from the Dominican Republic.

Francisco Liriano, whose 2016 season was an utter disaster in Pittsburgh (5.46 ERA through July, with 69 walks in 113.2 IP), was acquired by Toronto at the deadline. Someone on the Blue Jays staff is a master psychologist/pitching guru. After the trade, Liriano threw strikes again. His nearly unhittable slider has propelled him to 12 straight scoreless innings, including a six-inning, 10-K gem against the O’s last week. He’s on track to start again. In previous match-ups, Orioles slugger Chris Davis and outfielder Adam Jones have hit Liriano well. If he doesn’t have it early, expect a multitude of pitching changes from John Gibbons. The Jays two best starters (Aaron Sanchez and J.A. Happ) happened to be used over the weekend.

Meanwhile, the Orioles have a certain enigmatic fella named Ubaldo. Like Mr. Liriano, Mr. Jimenez was equally horrific early in May, June and July. Check out these monthly ERAs: 8.28, 7.23, and 10.13. Those numbers look more like mile splits for a seventh-grade track meet than a major league ERA. Incredibly, Jimenez only surrendered seven home runs in those 14 mid-summer starts. He did, however, give up 91 hits in only 63 innings. It seemed unlikely that a contending team would keep handing the ball over to such a batting-practice-level hurler by the end of July. But Buck Showalter kept the faith in Mr. Ubaldo, and it has paid off over the last two months, to the tune of a 2.95 ERA and only 34 hits in his last 55.2 innings. What goes up must come down, I suppose. When you take a look at his numbers against the Jays, Jimenez seems the likely candidate. Even with Michael Saunders’ impressive line (four homers and nine hits in 21 ABs), Jimenez has held Toronto’s hitters to a slash line of .220/.312/.370. In last week’s matchup, Jimenez stifled the Jays into the seventh inning, allowing one hit and three walks.

As you’ve seen in the span of six months, Liriano and Jimenez are like most major league pitchers: unpredictable. With such recent success on the mound, it’d be tempting to say that this game will be a pitcher’s duel. But I’ll go the other way: Adam Jones and Michael Saunders will tee off. Both starters will be replaced early. Both managers will use seven pitchers. The game will take five hours. Final score: Toronto 8, Baltimore 7.

I’ll be waiting for Thursday. That’s when the Red Sox open their Best-of-Five Division Series in Cleveland.