It's old school team loyalty vs. modern players as “brands.” 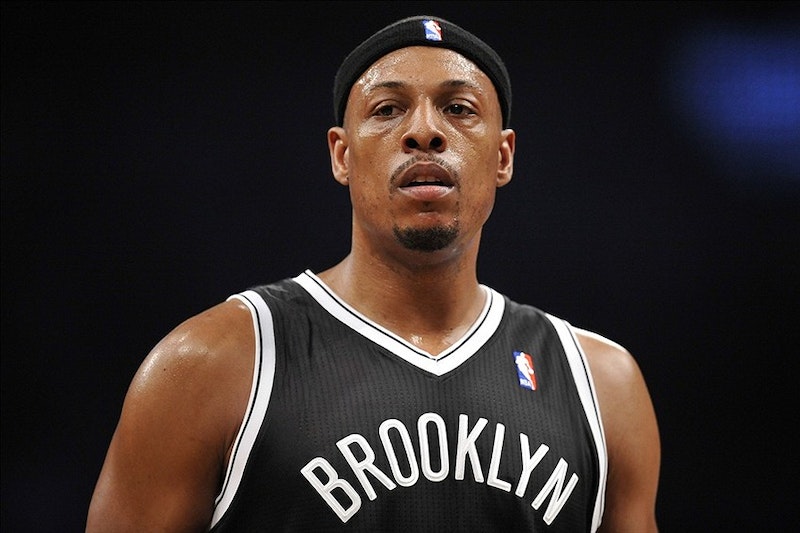 Paul Pierce is “old school.” The future NBA Hall of Famer recently re-ignited a smoldering controversy when he explained on Sirius XM why he had an issue with fellow future Hall of Famer Kevin Durant's decision at the end of last season to abandon his first and only professional team, the Oklahoma City Thunder. Durant instead went to the Golden State Warriors, who sent three players—Stephen Curry, Draymond Green, and Klay Thompson—to the NBA All Star game last season.

The Celtics icon is hardwired to reject Durant’s opportunism. He spent his first 15 NBA seasons in Boston toiling away on the famous parquet floor with teams that often had little potential for success. In his world—one that's viewed as “quaint” in the modern, business-focused NBA—individual goals are subordinated to the cardinal virtue of team loyalty. Fleeing the decidedly unglamorous Oklahoma capital to join the team that most experts consider to have had the single greatest regular season in NBA history last season (73-9) is a manifestation of weakness in Pierce’s playbook, especially if your team had just taken the Warriors to seven games in the playoffs, as the Thunder did last season. In Pierce's mind, Durant just isn't competitive enough to hang in there and avenge last season’s bitter defeat.

Golden State star Green took exception to Pierce's critique of Durant. “Nobody complain (sic) when somebody leave (sic) Apple and go to Google,” he said. “Aren’t they in competition with each other?” Quitting Coke to work for Pepsi would’ve worked better as an analogy, but Green’s point was clear. “Kevin Durant is a big business,” he added. “He is the CEO of that business.”

In two brief sentences, the Warriors power forward offered a distillation of the modern professional athlete’s mindset. Sports stars are their own brands. No greater backwater than Oklahoma City exists in the NBA, but the Bay Area is cool. That's a branding upgrade right there. Silicon Valley’s right down the road too, ideal for the hip superstar who’s preparing in advance for a seamless transition from roundballer to tech mogul.

All roads lead to basketball legend Michael Jordan when tracing the path of superstar athletes who’ve successfully navigated their way to huge branding success. MJ was often criticized for not speaking out on racial matters. "Republicans buy sneakers, too," is a quote often attributed to him, and even if it is apocryphal, it does sum up his careful brand management approach.

You can take the Durant-Jordan comparison only so far, however, since it was inconceivable that the Bulls star would’ve even considered leaving Chicago to join Detroit's Bad Boys after one of those three straight brutal playoff losses from 1988-1990. There's no doubt Durant is not as competitive as Michael Jordan was, but we knew this even before he flew the coop for California, when he let OKC lose to the Warriors last season after being up 3-1. Jordan never would’ve allowed that. Same with Pierce.

Jordan would’ve stayed in Oklahoma City and used his superstar leverage to bring in the talent to overcome the Warriors and win an NBA championship. This is what Pierce did in Boston. There’s been some pushback against Pierce. He once threatened to leave Boston if they didn't upgrade their talent, so some have said he's a hypocrite for criticizing Durant, but these critics miss the point. That’s what any athlete with bargaining power and the will to win does. Plus he didn't leave. The general perception is that Durant didn't work this angle hard enough when the temptation of Golden State was waved in front of him.

Jordan sobbed on the team bus after the Pistons eliminated his team for the third straight time in the playoffs in 1990. In 1991, he led the Bulls to a 4-0 playoff sweep of their hated Motown rivals. In 2000, Pierce was brutally beaten and stabbed 11 times at an after-hours party, barely surviving. In 2008, he was named NBA finals MVP after his Celtics defeated the Los Angeles Lakers for the league championship.

Draymond Green called Pierce “stupid” for not understanding the business angle of Durant's joining his team, and said nobody cares what Paul Pierce has done in his career. He’s just standing up for his teammate, who Pierce chose to attack, so he shouldn't be judged too harshly for those intemperate remarks. But Green’s wrong. Pierce was never a guy who traveled with an entourage, and his jewelry expenditures were picayune compared to current standards. No NBA superstar has ever joined a bitter rival right after a narrow playoff loss, and this offends a player like Pierce, who never considered himself a brand or a business. He probably tried to hold his tongue, but in the end he just couldn't manage it, because he knows there's some things you just don’t do.