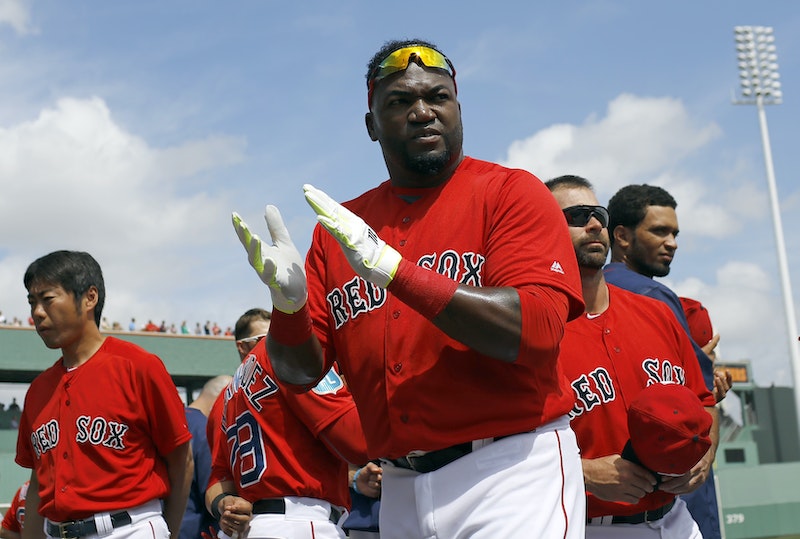 If you are a progressive person who grew up in the Boston area, you’re likely aware that Cleveland was the epicenter of the GOP carnival known as the Republican National Convention this summer. If you’re a sports fan who grew up in the Boston area, you may know that Cleveland represents the biggest Eastern Conference obstacle to the rebuilt Celtics. But before the NBA begins its season, we have October baseball in Cleveland. Will David Ortiz leave his mark on one final Red Sox run?

Big Papi has been complimented by the young MVP candidate Mookie Betts. This October, Ortiz and Dustin Pedroia, the sole holdovers from the 2007 title-winning roster, will watch as their young teammates, Betts, Xander Bogaerts, Jackie Bradley Jr., and left-fielder Andrew Benitendi all experience postseason baseball for the first time. It tells you something about this historically-dominant offense (5.42 runs per game is the second-best mark since the 2009 Yankees, behind 2015 Blue Jays) that Hanley Ramirez, whose second half of the season was as good as nearly any AL hitter is not named until six other Red Sox hitters have been mentioned. Who does former Sox manager, current Indians skipper Terry Francona look for an easy out? I suppose he’ll hope Brock Holt and Travis Shaw are digging in the box for every important at-bat this series. But then there will be Chris Young stepping in for a game-winning pinch-hit.

All this is to say that the Red Sox should survive and advance to the ALCS even without home field advantage. But let’s take a look at the pitching matchups, to add some supporting evidence.

The series opens on Thursday night in northeast Ohio, where Clinton leads Trump by two percentage points according to Nate Silver’s election prognosticators. The Red Sox will hand the ball to Rick Porcello, who held opponents to a .635 OPS (fourth in the AL). Cleveland will start Trevor Bauer opposite Porcello. Ahead of Porcello in the stingiest AL pitchers category (.631 opp. OPS) is Indians ace Corey Kluber, who will be taking the mound in Game 2, despite a mild leg strain that shortened his start last week. Kluber faces lefty David Price. These first two matchups are especially important for Cleveland because they’ve played poorly on the road this year (41-39), and they’ll be without Carlos Carrasco, whose season ended on a comebacker to the hand in September. Meanwhile, while Danny Salazar is now a young bench-sitter, after hitting the DL with a forearm strain in mid-September, following a lackluster post-All-star-break stretch. It seems I may have jinxed Salazar by writing about him before the All-Star break. That, or maybe it’s simply not possible for a human to throw 97 mile-per hour fastballs for more than two innings at a time and stay healthy.

In order to keep Cleveland from unleashing their offensive weapons, the Red Sox will have to minimize the walks, as the Indians’ 134 stolen bases were fourth in the majors. Fortunately, Porcello and Price have commanded the zone effectively all year. Much of the Indians’ success has been about keeping the bases from being empty and then wreaking havoc on them. In that sense, they’ve combined last year’s Royals strategy with an occasional three-run homer from Carlos Santana or Mike Napoli. How much fear does the 194-strikeout Napoli, or the 104-strikeout Rajai Davis provoke in the hearts of Red Sox pitching? Keep Davis off the bases (43 steals), and keep Napoli from extending his massive forearms, and the rest of the Tribe depends mostly on doubles and speed. The infield trio of Jose Ramirez (46 doubles, 22 steals), Francisco Lindor (30 doubles, 15 homers, 19 steals), and Jason Kipnis (41 doubles, 23 homers, 15 steals) are all more than capable. Fortunately, the Red Sox outfield defense is capable of turning those potential doubles into outs, with Betts and Bradley covering so much ground.

Other Signs Give Red Sox Advantage: Cleveland won 94 games, which seems like a solid number for a division winner, but they had the luxury of going 49-26 against a weakened AL Central division. They played .500 baseball against the other five divisions. Meanwhile, Boston won 93 while facing the toughest division in baseball, with four of the five teams winning 84+ games. Cleveland peaked in June, winning 14 straight games. Boston’s 11-game winning streak in mid-September propelled them to the AL East crown.

Francona will be forced to start Josh Tomlin, who has surrendered a whopping 36 homers, in Game 3. He’s likely to face another fixture of these future Sox, Eduardo Rodriguez, who has had his own bumps and bruises in 2016 after suffering a spring training knee injury. If Rodriguez struggles early, expect to see Drew Pomeranz in long relief.

So… as long as Boston takes one of the first two in Cleveland and the young bats get rid of the adrenaline/added pressure of October, it seems reasonable to expect this series to end in Boston by Monday. On the other hand, October baseball rarely follows logic. I mean, Daniel Murphy? Lorenzo Cain? Still, it’s hard not to be optimistic with Big Papi at DH.

Prediction: Red Sox over Indians in 4.