Chicago will separate suspects from prospects. 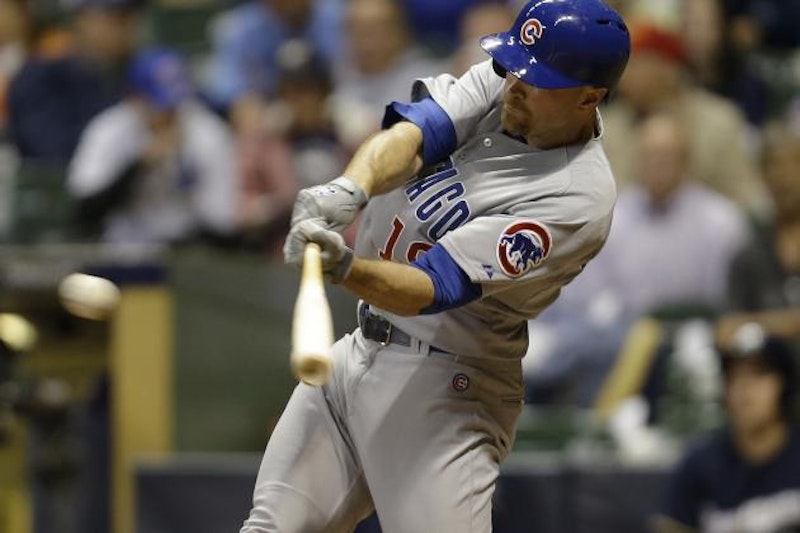 Fans of the Chicago Cubs are accustomed to low expectations. The 2014 season figures to be no different for the Wrigleyville nine as the Cubs once again enter Spring Training all but eliminated from the National League Central race. Cubs fans will binge on the daily Spring Training power displays put on by top prospects Javier Baez and Kris Bryant, they’ll salivate over an outfield featuring Albert Almora and Jorge Soler, and cross their fingers that Arismendy Alcantara can be a long-term keystone partner for shortstop Starlin Castro. The Cubs have fared well in offseason prospect rankings, and given the team’s hot stove slumber, the hope for a brighter future is the only thing the Cubs’ marketing team has to sell this season. While the big names mentioned above figure to spend the vast majority of the upcoming season in the minors, and preserving their big league service time, there is another group of young players that could have a more immediate impact on the Cubs long, slow rebuilding plan.

Names like Mike Olt, Josh Vitters, Brett Jackson, and Arodys Vizcaino will figure prominently into Chicago’s Spring Training plans. The quartet features a pair of former top prospects acquired through trade (Olt and Vizcaino) and a pair of struggling Cubs’ first round draft selections (Vitters and Jackson). The 2014 season could be a make or break year for all four of them as Chicago looks to separate the prospects from the suspects.

Olt was one of baseball’s hottest prospects as the July 2012 trade deadline approached. The Texas Rangers were dead set against dealing the young slugger and expected him to occupy a spot in the middle of the lineup for years to come. Olt suffered a beaning during a Winter League game following the 2012 season and his performance nose-dived in 2013. He battled headaches and vision issues and struggled to hit .213 in half a season with the Rangers’ Triple-A affiliate in Round Rock. The suddenly expendable Olt was included in a package sent to Chicago for starting pitcher Matt Garza. Olt was even worse after his trade to the Cubs. He hit just .168 with three home runs in 39 games for Iowa. Olt is battling with Luis Valbuena and Donnie Murphy for the third base job in Spring Training. If he can regain the form that led to 28 home runs in less than 100 Double-A games in 2012 the Cubbies could have a steal. If Olt continues to struggle he’ll quickly fall behind uber-prospects Baez and Bryant in Chicago’s third base pecking order.

The Cubs acquired Arodys Vizcaino in a July 2012 trade with the Atlanta Braves. Vizcaino was one of Atlanta’s most prized young arms at the time but had just undergone Tommy John surgery and the Braves wanted Cubs’ lefty Paul Maholm for the stretch run. Vizcaino was expected to improve in 2013 but he was again shut down with an arm injury and missed all of last season. He’s still just 22 years old but he hasn’t pitched competitively since the 2011 season when he tossed about 97 innings as a Braves farmhand and another 17 1/3 as a rookie reliever. Vizcaino is reportedly healthy this spring and ready to impress. If he can show some of the promise that made him a prized commodity in Atlanta the Cubs can add him to Pierce Johnson and C.J. Edwards as they look to build an inventory of young pitchers to match their impressive collection of young hitters. Vizcaino could help the Cubs out of the bullpen as early as this season but will more likely build up arm strength as a starter in the minor leagues.

When Theo Epstein and company arrived in Chicago the two prospects fans looked to were Josh Vitters and Brett Jackson. Vitters, the Cubs top selection in the 2007 draft, was a young third baseman coming off an impressive 2011 season at Double-A Tennessee. Jackson, Chicago’s first pick in 2009, was an athletic outfielder with power and speed. Vitters earned a big league promotion to close out the 2012 season and was downright awful. He hit just .121 with 33 strikeouts in 99 at bats for the Cubs. Vitters was de-railed by an injury early in the 2013 season and again missed an opportunity to solidify his place in a makeshift Chicago lineup. He’s back this spring with a chance to earn a job in the Cubs’ outfield, his place at the hot corner taken by upstarts like Olt, Baez, and Bryant.

Brett Jackson experienced similar difficulties in his first Major League action in 2012. In 44 games with Chicago Jackson hit .175 with a stunning 59 strikeouts in 120 at bats. Jackson’s contact issues earned him an offseason of work with a swing coach, a revamped approach at the plate, and a return to Double-A. Nothing much went right for Jackson in 2013 as he posted a .210 average with 121 strikeouts in 324 at bats between Double-A and Triple-A. Jackson is hoping to shine in the Cubs’ wide open outfield competition (only Nate Schierholtz is guaranteed a spot) but more bus rides look like a safe bet for the onetime top prospect.