Waiting for The Hockey Maven to right my world. 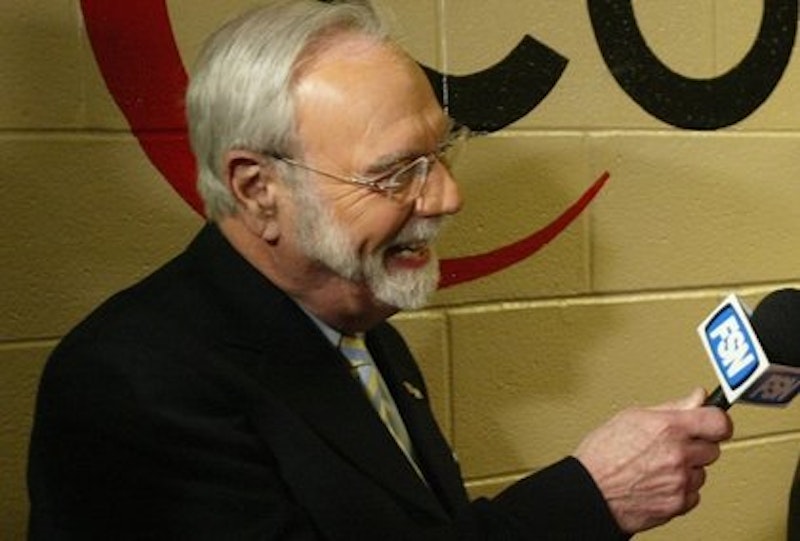 Living in upstate New York has its advantages when the New York Rangers trade their strapping Rochester-born captain to Tampa for a disgruntled Canadian with a proper noun for a last name. The key advantage here being a proximity to Stan Fischler. Despite the fact his beloved New York City subway does not have a stop there, Stan has a second residence in Boiceville, a wide spot in the road between Phoenicia and Woodstock. It’s one of those non-towns with a famous bakery and splendid Catskill Mountain terrain only a decent slapshot away from the Ashokan Reservoir, the body of water that makes NYC pizza so vastly superior to pies from other locales. (It’s all about the water in the dough, I’m told).

Some days I think I see the MSG broadcaster known as “The Hockey Maven” everywhere. In the parking lot of the Beekman Arms in Rhinebeck, in the produce aisle of Adam’s Fairacre Farms store in Lake Katrine or at a stop sign in Upper Red Hook. There are many Fischler lookalikes, it seems, and during these moments of mistaken identity I realize I miss his rushed wit, misunderstood Borscht Belt references and general grumpiness regarding the forgotten sport of hockey. So when Ryan Callahan was dealt along with a few draft picks for a creaky Martin St. Louis of the Lightning, I knew I could turn to the Maven for the correct, old-school angle. I didn’t know I’d have to wait so long for his ragtag Sunday column in the Kingston Daily Freeman, but still, Stan delivered the goods, especially when it comes to hopeless romanticism: “To me, being the captain of a New York major league team is the acme of an athlete’s career. Ask Derek Jeter and he’ll confirm,” Stan wrote. It’s not exactly “Hub Fans Bid Kid Adieu” stuff but it’ll do when it comes to predictable stoicism from a beardy and highly likeable misanthrope. His Freeman column went on to logically dismantle Rangers GM Glen Sather’s decision to deal Callahan whom Stan called “My kind of player… not overly skilled but smart, tenacious and one who never took a night off.”

Those who have watched Fischler through the years can see that Mandy Patinkin on Showtime’s Homeland has totally stolen Stan’s mid-70s look when the Maven toiled on the World Hockey Association sidelines. Fischler maintained that style well into the early-80s when he toted the stick microphone for Sportschannel on Long Island—well before he turned many shades of gray that make up his current and less ubiquitous persona.

And then there is sweet Shirley Fischler, his wife of almost 50 years. She also has a weekly column in the Kingston Daily Freeman and unfortunately of late, it has documented her heartbreaking struggles with cancer.

During a recent visit to the Kiwanis Ice Arena in Saugerties, I was lacing up my skates and happened to look up into a trophy case above me. In it, next to a generic autographed headshot of the still-hot Linda Cohn of ESPN was a signed photo of Fischler holding his MSG microphone. Closer inspection showed his Sharpie scrawl: To the FDR, Kingston-Saugerties hockey guys: stay onside! Sincerely, Stan Fischler. Even closer inspection showed the lapel pin on Stan’s blazer: a crossed U.S. and Israeli flag, a detail certainly lost on the upstaters of Ulster County but loaded when Fischler is stomping around Manhattan or his native Brooklyn. Coincidence that his doppelganger Patinkin revived his career via a cable series based on an Israeli television hit? Maybe.

Stan always reminded me of the guy causing problems at the counter at Katz’s Deli, perhaps reaching over to straighten the photo of Mark Messier on the wall. Which brings us back to Callahan. The Rangers could’ve built a team around this captain, but no, who builds teams anymore? Certainly not James Dolan and his 12-Step amateur blues band approach to running a venue with two historic franchises now breaking records for underachievement. It’s all extremely embarrassing for a major city that has no college sports prowess and has baseball and football franchises relegated to toil in the distant suburbs. The Knicks and Rangers play in the heart of Gotham.

Though the Rangers have not suffered since Callahan’s departure, there is a haze of confusion lingering on Broadway as hockey season plummets into March and battles Spring Training baseball for cerebral cortex relevancy. The sliding pucks kind of gets you through winter but when the Stanley Cup playoffs mix with Flag Day in June, attention span circuitry goes into overload and tends to fry.

I always said I’d quit the taxi business once I got Sonny Rollins, who lived in Germantown for many years, to ride in my rig. Rollins has since moved to Woodstock in his dotage. Perhaps my new exit vow for the transportation business is to get The Hockey Maven in the taxi at some point, though Boiceville to anywhere is an expensive ride from my side of the Hudson River. I’d guess Stan would subject himself to electric shock therapy before ever calling a taxi to get him around out on Route 28. That’s because he’s an LIU grad with an Ed Kochian penchant for cutting to the chase like “real” New Yorkers. The ones who have—like him—climbed the staircases at Queens College, Brooklyn College, Fordham and Columbia. The more Fischler you watch from his golden era, the more you get the feeling he coached Crazy Eddie, advised ice cream poobah Tom Carvel and was front and center for the band Slapshot during the Sunday matinees at CBGB’s, all at the same time. This is the beauty of Fischler’s range.

One thing most metropolitan hockey fans know is Stan always has a way of bringing down fellow broadcasters who are company yes men during pregame or postgame shows. Fischler never over-smiles his way through the teeth-whitened world of cable sports television; in fact, most of the time he is frowning or at least scowling. And for all of that I would thank him if and when I really do encounter this legendary broadcaster somewhere in our shared corner of the Hudson Valley.