MLB yields to its own pressure to over-regulate the game. 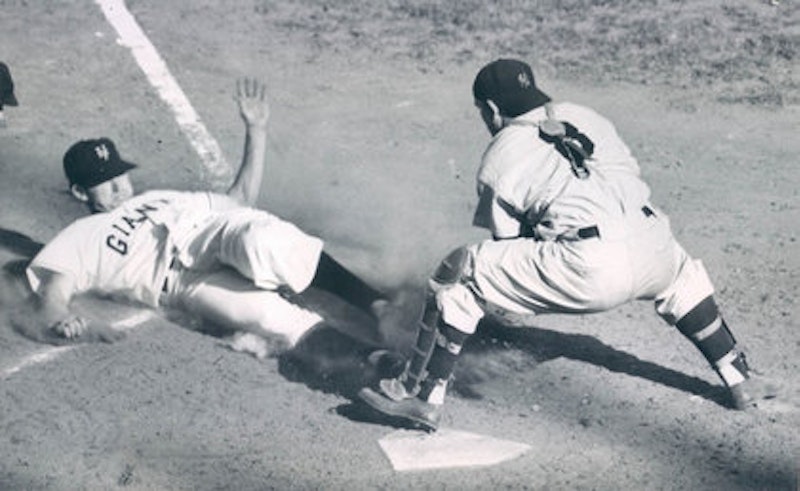 Someday, as the rules of the game of professional baseball are amended and changed for the sake of safety and well-being of all participants, there will be a time when no writer can start his or her column/blog entry with the five words “When I was a kid.”

When I was a kid I watched on television as Pete Rose blasted into home plate and obliterated Ray Fosse during the All-Star game. It was Charlie Hustle, of Cincinnati, against some catcher from the American League outpost of Cleveland. It was a micro battle of Ohio, played in the sparkling new East German confines of Riverfront Stadium in Cincinnati. It was extra innings, way past all bedtimes, and my uncle from Providence was visiting us near Columbus, and he was possibly asleep from Budweiser and some improvised land-locked shrimp cocktail.

My two older brothers were both catchers. One had his picture in the local sports page looking like his hero Johnny Bench (the enemy of my hero Manny Sanguillen) tagging out a runner at home during the championship game. The kid was out, he didn’t really challenge my brother Dan, and you could see he had a good squatting position with the heft of his lower body preventing the wiry lad from any access to the valued plinth. It was a great action shot, the black-and-white photography betraying the brilliant Kelly green of his uniform, his black hair perfectly feathered—you could tell that because like Bench when there was a play at the plate, they took off their mask not just so they could see the incoming throw better, but because it was man to man combat and they already had the advantage of shin guards and chest protector. And this is what happened to catchers. They got a shoulder to their armpit and were heaved backwards away from the precious home plate. The umpire would check to see where the white orb was…in a glove or in the dirt. And they would make the call emphatically, because a home plate collision is and always will be act five of Hamlet with people leaping into graves with a few more skulls in hand.

At this point, as MLB has mealy-mouthed an anti-home plate collision rule for this season, it is all a bear trap for any fan over the age of 23. The cliché of “Big Government” has come to baseball, and the check-cashing barrister types of the league office who used to keep to themselves anonymous and well-fed at Smith and Wollensky are now front and center like the rules committee of the Park Slope food co-op during a borrowed lentils scandal.

They have deemed that instant replay will be jacked up this season with silly NFL style flag-throwing review procedures for each manager, and thanks to the no barreling into the catcher rule, we will never have to miss Buster Posey’s hairdo at the top of a broadcast. Apparently, that’s what is important. The Posey injury during a clean home plate collision before Memorial Day in 2011 seemed to spark uproar amongst the bedwetters who eventually led us to this day. So the question remains, will Ty Wigginton-- wherever he is playing this season-- ever be allowed to round third base again?

Maybe ESPN Classic could do a compilation show of Dave Parker bearing down on Ted Simmons, or Willie Wilson dissolving into Thurman Munson, or Reggie Jackson emasculating Bill Freehan, or even Bernie Williams turning Brent Mayne of the Royals into a human swastika.

Expanded use of instant replay, “limiting” collisions at home plate… a generation that grew up with rubberized playground surfaces and no scoreboards during “competitive” sports is now starting to regulate a game that has been around since the Civil War. A game that did not need many tweaks until we entered the multi-over-management control-freak era we are in now, where injuries apparently can be outlawed if only we have enough middle-management types. And anyone who speaks against this odd redefinition of progress is considered a Luddite old fogey who won’t change with the times. This is what the game has come to as the 2014 season inches closer with a ridiculous opening series just after St. Patrick’s Day in Sydney, Australia of all places.

The only thing more ignored and funny is how a group of hobbyists called the Society of American Baseball Research was glorified into actual “statisticians” by one rather pedestrian American League general manager, a book by a New York Times writer and botched Hollywood movie which miscast an overweight junkie portraying a pretty good manager named Art Howe who remains fit as a fiddle.

Of course, to accommodate the instant replay madness, MLB has implemented an NHL-style “command center” TV war-room that will not only settle manager video replay challenges, but further glorify television and technology as the saviors of all things good and just because “this is 2014” and all this tech is, like everyone’s smartphones, right at our fingertips. Therefore it’s good and has to be “utilized” in a game that five years ago was decried as being “too slow” and taking too long. This will come in handy, no doubt, as a time-killer for announcers during rain delays or during the lengthy delays of the game while the A’s call for a review on a fan interference play in Seattle on a Tuesday night in May when half the world could give two damns. Let us not confuse it with other MLB public relations shithouse known as the “Fan Cave.”

Our only hope of redemption is that somehow the figure of Paul Newman appears out of the static with his great summation speech from the end of the movie The Verdict when he tells the jury they are the law and that he believes we have justice in our hearts. If we do, somehow we will still be able to watch baseball, despite all this.