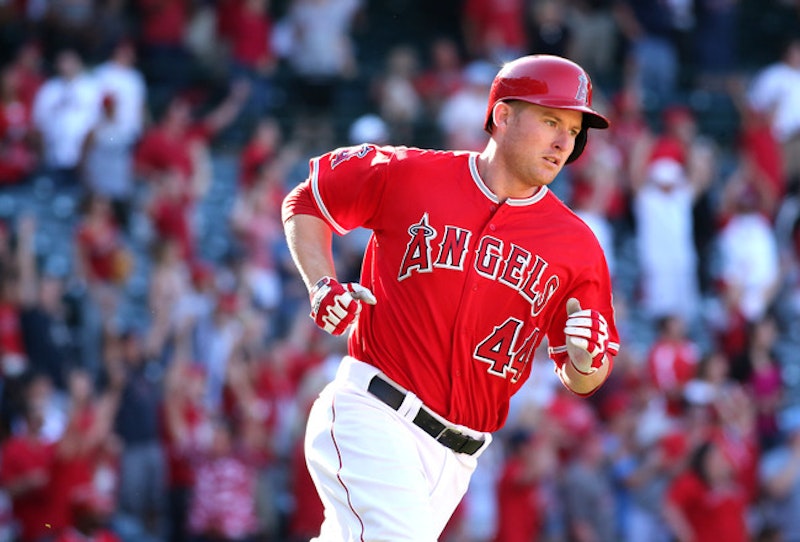 The Los Angeles Angels were one of baseball’s biggest disappointments in 2013. The best team money could buy wasn’t so good after all. Josh Hamilton flopped in his first season in SoCal, Albert Pujols had season ending foot surgery, and the bullpen was a disaster. The Angels started off the Winter Meetings with a bang, dealing slugging left fielder Mark Trumbo to the Diamondbacks in a three-team deal that injected some young pitching into the rotation.

Trumbo, a one-dimensional slugger with poor on-base skills, was sent packing for the desert in return for a pair of young lefties, Tyler Skaggs and Hector Santiago. Skaggs was the Angels’ first round selection in 2009 and was later dealt to Arizona in the Dan Haren trade. The 22-year-old southpaw has struggled in limited big league duty (5.43 ERA in 13 starts) but has generally been regarded as one of the Diamondbacks’ top prospects. The Angels are hoping that Skaggs’ late season drop in velocity was a function of his age and workload and that he still has a bright future. Skaggs won’t be eligible for free agency until after the 2019 season. It should be noted that current Angels’ GM Jerry Dipoto was in Arizona when the team traded for Skaggs and is very familiar with the young hurler.

In Santiago the Angels acquired another young starter with a more established Major League resume. The 25-year-old Santiago has pitched parts of three seasons for the White Sox compiling a 3.41 ERA and 1.36 WHIP over 224 2/3 innings. Santiago figures to be a dependable back-end starter for the Angels and will replace Jason Vargas, who recently signed a four-year $32 million deal with the Royals. Santiago has averaged 4.5 walks per nine innings in his career so far: if he can improve his control without sacrificing that impressive strikeout rate he could end up being a gem. Santiago is another young, controllable asset for a team loaded with high dollar long-term deals; he’s scheduled to become a free agent following the 2017 season.

The trade of Trumbo reportedly frees up about $4 million for the Angels who can use some of that savings to make bullpen improvements. Dipoto already signed former Indians reliever Joe Smith to a three-year contract a few weeks ago and figures to make more additions over the next few months. Trumbo will take his career .299 on base percentage and lackluster defense to the spacious outfield at Chase Field. Trumbo will be counted on to provide lineup protection for Paul Goldschmidt and his warts will be overlooked, for now. The Angels will hope that Pujols and Hamilton can rebound to make up for the power loss that comes with Trumbo’s departure and that Skaggs can fulfill the promise that made him such an attractive prep pitcher in 2009.