The Orlando junket is a remnant from the past. 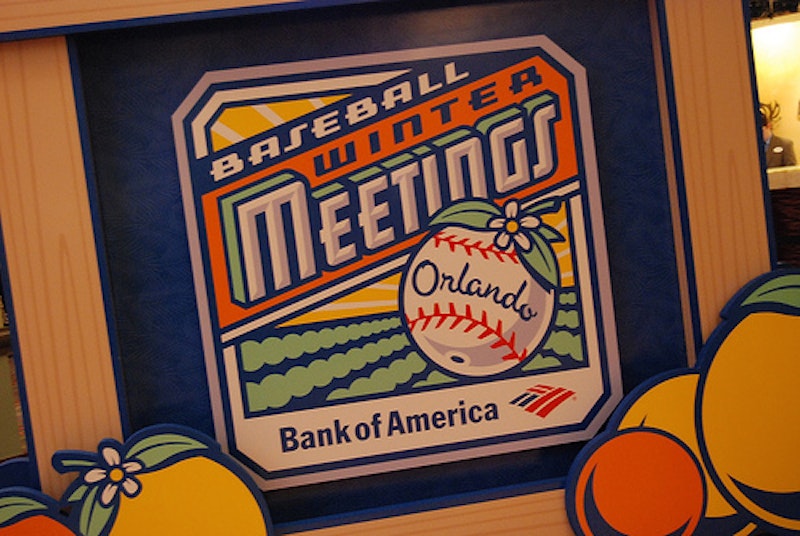 Major League Baseball’s Winter meetings started this week in Orlando, FL—technically in Lake Buena Vista, FL, which is Disney, which owns ESPN and ABC. But those details, much like the winter meetings themselves, are fast becoming irrelevant. There could never be enough sinkholes in Orlando to absorb the colossal amount of time wasted at this now ancient sports marketing ritual. Inevitably this annual gathering will go the route of other industry “trade shows” in Chicago or Las Vegas or New Orleans. Junkets are passé in the age of Skype, so collating receipts from hotel bars and airport taxis will soon be soft-spoofed on Mad Men when the show finally catches up to the late-1970s and early-80s and thus will end. Too bad Gannett bad boy and Cocoa Beach, FL, local Al Neuharth is no longer with us because he would be sure to weigh in on the time he arm-wrestled Jimmy Piersall at the stone crab joint in Miami or how today’s players don’t have enough girlfriends and how Orlando still kind of blows.

For decades the winter meetings were a cauldron of hotel lobby trades and smoke-filled rooms of wheeling and dealing as general managers and front office staff raced to the bottom of the lounge aquarium in search of some off-season solace that would get them through to the next torture that is Spring Training. Sports writers actually got “scoops” like “Ed Armbrister (and Joe Morgan) to Cincinnati for Lee May, Tommy Helms etc.” Now the sabermetric cult shows up and the front offices stand around and wait for permission to leave and go back to playing their own real-life version of rotisserie baseball, telling cocktail waitresses that “Yes, I know Brad Pitt of the Oakland A’s.”

I attended baseball’s winter meetings in Atlanta back in 1988. The “show” was dubbed “Southern Ball” and had a quasi-antebellum theme and was headquartered at the H.R. Giger-esque Marriott Marquis. It was worth the trip from Columbus, Ohio to see Don Zimmer walk into the lobby bar looking for a spittoon while Jim Leyland was making for the first ashtray he could find. I was there as a “job seeker” (a description I still hold some 25 years later by the way) on advice from some cat in the front office of the Columbus Clippers. I was two years out of journalism school and already cold-calling minor league baseball teams looking for a writing gig. So I was sent to meet my own personal General Sherman in Atlanta. To get there, with poorly Xeroxed resumes in hand, I either borrowed my brother-in-law’s Datsun 280ZX or bummed money off my ex-girlfriend for a Delta Airlines ticket—memory does not serve properly. I did not book a room anywhere and would spend most of the overnight stay with fellow “job seekers” who all seemed to be biracial fellows with an “in” in the Phillies’ front office. They were much more confident and had kind of majored in sports marketing at various Southern universities.

After attending the seminars (there was one on “effective alcohol management”) that were also checked out by such job-seeking heavyweights as ousted Pirates GM Syd Thrift, we all adjourned to an IHOP type joint somewhere down on the affordable end of Peachtree Center to assess our chances at landing a gig with any minor league team or MLB front office. I felt an air of desperation having quit my first reporting job at the afternoon daily Wheeling News-Register in Wheeling, WV, where I mainly wrote obituaries on weekends and domestic violence police reports during the week. There had been a tasty teacher’s strike and the post-mortem of a major prison riot in Moundsville in addition to a “Krishna murder” on the docket but other than that, I could not endure the depressing mis-en-scene of the Ohio River town made famous by a single vomitus-causing Billy Joel lyric.

I was waiting to hear about a trade journal slot that would move my typewriter and me to Times Square, but in the meantime I had to fill the void. Needless to say I departed Atlanta and went back to bogus Columbus without a job. Nine weeks later, though, I got a call from a team owner in Charleston, WV, who needed a guy to support his sales staff and run the office a little and maybe conjure up some promotional schemes that put the fun in minor league baseball. Dirtiest car in the lot, funny nose and glasses night—that sort of thing. I quit my bank messenger driving gig and moved to Charleston to work for the psychopath for a short two months during which I talked him out of running his hot dog mascot guy through the burn ward of the local children’s hospital. I didn’t feel it was an appropriate image for burned kids to be shaking hands with a hot dog in a bun covered with Styrofoam yellow mustard.

The GM/owner in Charleston was a Bible-toting Southern Illinois purist who thought I might have contacts back in Columbus to help him land a Quik-Crete contract for the program or some type of barter deal for work on the ballpark stairs. I lived above the Magic Hat dry cleaners on MacCorkle Ave., just a few blocks from the ballpark. I took the apartment because outside the window was a neon white rabbit emerging from a black top hat with an orange carrot pointing toward my single window. Perhaps the chemicals did their damage. The Union Carbide plant down the road certainly smelled funny, and I had more than one random blister on my forearm for no apparent reason. Before the blisters could burst, the entire front office staff (and me) quit before the April opener for the Charleston team. The guy had us painting stadium seat backs at midnight in freezing weather while having gospel tent-style sales meetings all day.

The four-person walk out was very Norma Rae meets Mother Jones in an Appalachian version of The Great Escape. In the end, success is measured by remembering a good bar from the experience, however short it was. That would be Tony’s Gold Dome a few blocks away from the Magic Hat Dry Cleaners. At the end of the night, Tony would wander over to a deep freeze unit parked in the center of the barroom. He would, at last call, produce a handful of Steak-Umms from the liquid nitrogen container and throw them on his grill and randomly serve them to the last few stragglers at his bar, wishing us luck and hoping to “point you in the right direction.” Which meant the door. I have Tony’s obit somewhere from the Charleston Gazette. I was glad I didn’t have to write it, and I’m pretty sure he would have told me to never go the MLB Winter Meetings with any shard of hope.