The Auction Block for Jeff Samardzija

The Cubs need to shed their ace for rebuilding purposes. 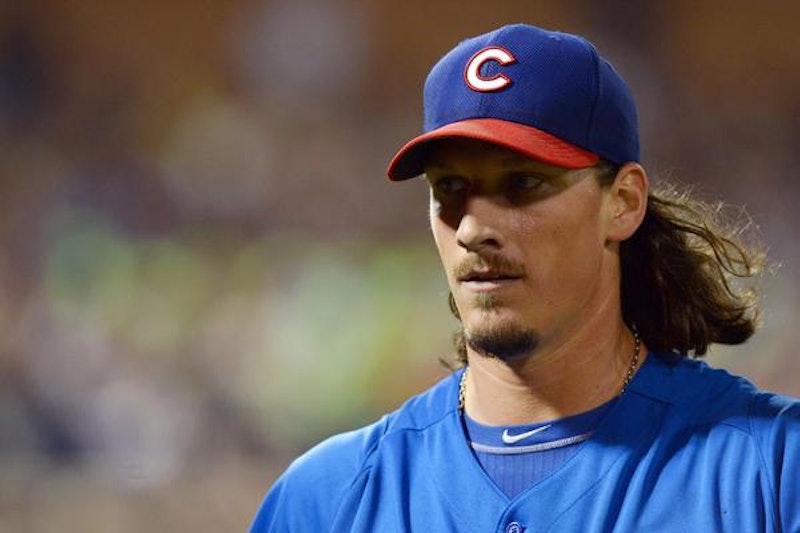 The Chicago Cubs are at an interesting crossroads in the rebuilding project administered by Theo Epstein and Jed Hoyer. Chicago has a minor league system loaded with some of the top young talent in baseball. Kris Bryant, Albert Almora, Javier Baez, and Jorge Soler figure to join Starlin Castro and Anthony Rizzo in the Cubs’ lineup sometime in the next two seasons. While the future lineup looks promising, the starting rotation options aren’t quite as sunny.

Chicago’s two best pitchers are right-hander Jeff Samardzija, who turns 29 in January, and 26-year-old southpaw Travis Wood. Beyond the recently acquired C.J. Edwards and Pierce Johnson, the Cubs lack highly regarded pitching prospects. Samardzija is two years away from free agency and, as a local product, is interested in staying in Chicago. The two sides have been unable to agree to a contract extension which has led to speculation that Samardzija could be dealt either this offseason or prior to the July 31st trade deadline. Given the exorbitant free agent contracts thrown around over the last few weeks and the paucity of frontline free agent pitching the Cubs may be auctioning Samardzija off to the highest bidder at next week’s winter meetings.

Chicago will be looking for a package of high-end pitching prospects in return for Samardzija. Epstein and Hoyer dealt Matt Garza to Texas in July, after failing to agree to a long-term contract extension, for a multi-player package centered around pitching prospects C.J. Edwards and Neil Ramirez as well as 3B Mike Olt. Chicago will try to exceed the Garza return in any deal for Samardzija.

On a related front, the Cubs are expected to be bidders for Japanese righty Masahiro Tanaka. Chicago’s big league payroll has been slashed over the past few seasons in part due to the rebuilding efforts and also as an effect of the debt load the Ricketts family took on when they bought the club. A posting fee for Tanaka would not count towards the Major League payroll and thus not subject to the debt restrictions making the Japanese star and attractive option. If Chicago submits the winning bid for Tanaka they could in effect give him the contract they would’ve given to Samardzija. Tanaka is only 25, which would put him in the prime of his career when the Cubs’ current crop of star prospects breaks into the big leagues. There’s no guarantee that Chicago will sign Tanaka but the prospect of having him locked up long-term plus the prospects received in any Samardzija trade has to be tantalizing for Epstein and company.

The Tigers’ trade of Doug Fister to the Nationals earlier this week may hurt the Cubs a bit in Samardzija trade talks. Fister has been a productive under-the-radar performer for years and represents a significant value for Washington. The Tigers have been ridiculed by many analysts for “selling low” on Fister. The Fister trade had the dual effect of removing a possible Samardzija suitor while also setting the prospect bar low for a comparable pitcher. The Cubs could decide to wait until free agent hurlers Matt Garza and Ubaldo Jimenez find new homes before getting serious about trading Samardzija but if someone offers the right pitching prospects next week expect Epstein to pull the trigger.