How Columbus survives the NHL circuit. 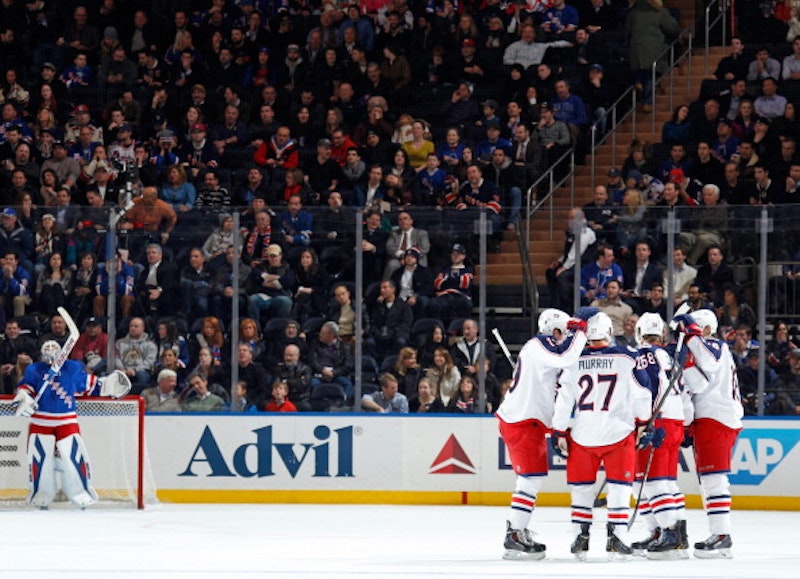 What do you get when you combine a city full of insurance companies, banks, fast food corporate headquarters, boredom and a mega-university?
Columbus, Ohio.

At least that was my impression, formed well before billionaire Les Wexner started spreading his dough all over town, injecting steroids into the suburbs and erecting a giant art empire on Planet Ohio State University. Present-day Columbus is a lot more fun, at least on paper and in terms of sports options, than it was in the late-1970s and early-80s. That’s when I was driving in from the farmlands to the northeast of the capital. A high schooler maybe hitting the midnight movie house on High St., maybe wandering through the Monkey’s Retreat head shop or Magnolia Thunderpussy Records where a flyer announced a show by Ronald Koal and the Trillionaires at a new wave club with zebra banquettes. Going off that menu, there was also a big Polynesian restaurant and a bunch of malls and 10,000 pizza and sub shops. But there were no professional sports teams.

There were, of course, the Buckeyes’ massive turnouts for NCAA football, which is a statewide scarlet-and-gray clad cult. The OSU basketball team also makes some noise, and back then they played to huge crowds in the rickety St. Johns Arena. For the hockey fan, there was the OSU team playing in a rinky-dink rink next door to the basketball arena. OSU hockey was a minuscule athletic program compared to the goliaths playing on the pre-cable national stage for firebrand gridiron legends such as Woody Hayes over at the Horseshoe. But it was in that tiny OSU ice rink I got to see a lurching defenseman named Ken Morrow skating for the Bowling Green State University Falcons, crushing Buckeyes into the corner boards and commanding the ice with his manly beard. Yes, it was the same Ken Morrow who would go on to help the “Miracle on Ice” U.S. Olympic squad beat the Russians and go on to win the mystical gold medal at Lake Placid in 1980.

The minute I cleared out of the greater Columbus area for college and then points east, the city exploded with diversified sports options other than our own competitive eating at the massive White Castle off Greenlawn Ave. The Columbus Crew of Major League Soccer got their own stadium out near the fairgrounds, where the lowly Columbus Owls used to toil in the mid-70s as a minor league hockey lowlight in the drafty Fairgrounds Coliseum. The Owls had moved to Dayton by the time I got my driver’s license, so I never got to see them live. There was also a AAA minor league baseball entity called the Columbus Clippers, but they played on crappy AstroTurf and could not lure a Pirates fan, a Reds fan or an Indians fan away from the not-too-distant big league ballparks.

At the turn of the century, Cowtown (as it was known to local punk rockers) would get rewarded with an NHL expansion franchise dubbed the Columbus Blue Jackets. Ohio already had one disastrous NHL foray in the doomed Cleveland Barons, a fun team skating in a giant arena that hooked me on the sport during a truncated period of 1976 to 1978. The Barons home games were played at the uber-suburban Richfield Coliseum. The building became famous for the Muhammad Ali vs. Chuck Wepner fight in 1975 and was kind of a Logan’s Run structure constructed off bad highway access halfway between Cleveland and Akron. Sure, the Columbus Owls were much closer to our house, but I was hungry for NHL action a step above Slapshot style garage sale goonery. The Barons basically gave away free tickets to any corporation within 100 miles, so my father’s company got plenty of ducats and I hounded him to drive us 90 minutes through bad weather and worse traffic to watch Dennis Maruk and Gilles Meloche ply their trade for a team that would merge with the Minnesota North Stars after just a few seasons up in Summit County, Ohio.

So in the year 2000, even from a distance, it was pleasing to see fan excitement when the Blue Jackets settled into a new arena built on an old penitentiary site in downtown Columbus. These days, when there are fans, there will be blogs. One called Full Mental Jackets was eye-catching and funny and was run by a guy named Greg May, a lawyer from Cincinnati and CBJ season ticketholder who got in big on the early days of Buffalo Wild Wings franchising. May’s blog had the right combination of over-informed smart fan and beer-fueled glass-pounder. He spared the arrogance because you could sense Blue Jacket fans were just glad to be seeing pro hockey on a regular basis. May has great seats behind the goal and you could see him reacting to plays and interacting with players on the video highlights. Earlier this month, I was sad to see May was shutting down his Full Mental Jackets blog. He is instead joining a bigger Blue Jackets blog called The Union Blue.

I checked in with May to see what happened.

“Right now, it's a little weird,” May wrote via e-mail. “I started FMJ in 2009 and had a lot of fun with it, but it was reaching a limited audience. Taking our schtick to The Union Blue is going to expose us to a much broader audience.” May, a father of three daughters, was having trouble finding time to write and keep the blog current. He’d just been to the Blue Jackets game against St. Louis. Columbus blew a good early lead and would fall to the Blues 4-3 in overtime. “Pro hockey electrifies downtown Columbus this time of year and gives it life,” May says. “The Jackets went up 3-0 in the first. The place was rocking. My buddy leaned over to me with a big smile on his face, beer in hand, and said, ‘Can you imagine if we didn't have the Blue Jackets? What the fuck would we be doing right now?’”

May, who only recently divested from his Buffalo Wild Wings roots, knows how to run a sports bar/restaurant, that’s for sure. His up-close observation of Central Ohio fandom comes to the same Scarlet-and-Gray conclusion. He didn’t drink the Ohio State Flav-or-Aid, by the way. May attended the even more sports-mad University of Cincinnati.

“The popularity of football in this part of the country, combined with the success of the program and the number of OSU grads in Columbus, adds up to something like a Bucknado,” Mays says. After Buckeyes football, May says the Blue Jackets are second fiddle (perhaps tied with OSU basketball), followed by the Crew soccer team and then Clippers baseball. May and his new comrades at The Union Blue blog will certainly enjoy the season as the Blue Jackets rolled their ye olde cannon forward toward January hovering around .500. Will Columbus make the playoffs (for only the second time in 13 seasons)? Maybe. Despite the uptick in wins so far this season, and some very lively blog coverage, the CBJ languish near the bottom in NHL attendance. Ironically, the whole cannon and Civil War Union Army theme is lost on many locals who drive pick-up trucks through Licking, Richland, Knox and Fairfield counties adorned with Confederate Flags galore. The Redneck identification with the Deep South lives strong well above the Mason-Dixon line in “Blue Jacket” territory.

At least Columbus hockey fans can look forward to 2015. That’s when Nationwide Arena gets to host the NHL All-Star game.