Who Can Figure Out KC's Dayton Moore? 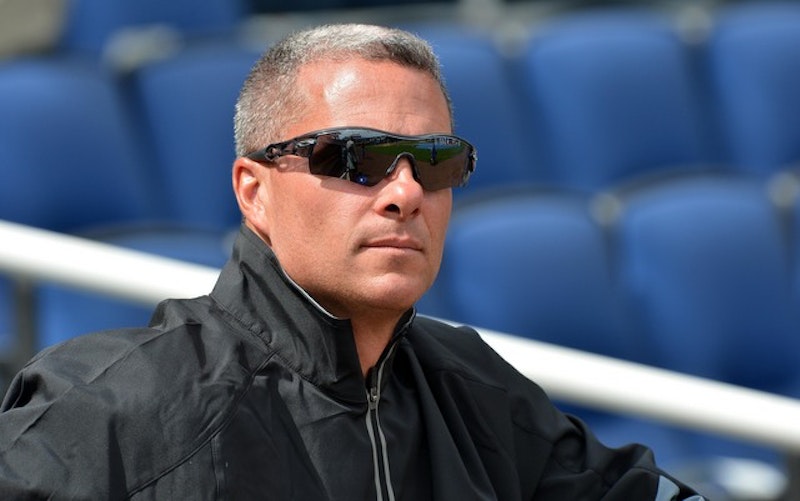 The Kansas City Royals made a surprising late-season run at a playoff berth in 2013 as some of their young talent finally took the step towards productivity. The James Shields and Ervin Santana acquisitions of last winter paid off in the win-loss column and propelled the Royals into contention. With Santana about to bolt as a free agent, and Shields’ contract set to expire following the 2014 season, the Royals’ window of opportunity may be closing as quickly as it opened. Kansas City GM Dayton Moore has played fast and loose with his checkbook this offseason in a foolhardy attempt to keep the Royals relevant.

Moore’s trying to supplant Philadelphia’s Ruben Amaro Jr. as MLB’s Worst General Manager. While Amaro refuses to bite the bullet and rebuild his team’s aging and increasingly dysfunctional roster, Moore has sent baseball’s price for mediocrity through the roof. Moore started the offseason by signing free agent lefty Jason Vargas to replace Santana in the rotation. Vargas received a four-year deal worth $32 million after posting a 4.02 ERA, 1.39 WHIP, and below average ERA+ of 94 for the Angels in 2013. Vargas is Moore’s biggest free agent expenditure since the ill-fated Gil Meche contract (five years for $55 million) back in December of 2006. Meche went 6-15 with an ERA well over 5.00 in his third and fourth seasons in Kansas City before mercifully retiring and taking the Royals off the hook for the $12 million he was owed for the 2011 season. Royals’ fans may soon be hoping that Vargas is just as gracious.

Moore followed up the Vargas signing by handing soon-to-be 32-year-old second baseman Omar Infante a four-year contract for over $30 million. Infante cashed in after having the best year of his career in 2013. The second baseman posted career highs in OPS (.795), slugging (.450), and OPS+ (113) in the potent Tigers’ lineup. Infante is likely to regress in 2014 but he’ll be paid handsomely into his mid-30 thanks to Moore’s generosity. Moore chose to sign Infante rather than give a full-time opportunity to prospect Johnny Giavotella, a 26-year-old second sacker with a .388 OBP in parts of three minor league seasons. Giavotella has flopped in his brief stints with the Royals but a few months of letting him adjust to the big leagues would’ve probably been a better investment than giving $30 million to Infante. Moore drew additional criticism on the Infante signing when he made these comments earlier this week:

Infante has a career on base percentage of .319. If only Moore had asked him to get on base more frequently earlier in his career Infante could’ve signed for even more than $30 million. Maybe Moore also plans to ask Jason Vargas to start pitching like Clayton Kershaw. That’s all it takes with a lot of these guys.

Moore’s curious signings, and ill-conceived comments, have him neck and neck with Amaro for worst offseason by a GM. Amaro drew some raised eyebrows when asked about possibly signing free agent pitcher Matt Garza during the Winter Meetings. Amaro responded with this gem, “Kendrick has 64 wins. You know how many wins Garza has? 67.” Amaro may have simply been defending his incumbent pitcher but these comments coupled with the contracts handed out to Ryan Howard, Chase Utley, Marlon Byrd, Carlos Ruiz, and Jonathan Papelbon have made the Phillies’ General Manager baseball’s resident court jester.

While Dan Duquette of the Orioles and Pittsburgh’s Neal Huntingdon have drawn criticism for their inaction this winter, at least they haven’t guaranteed over $90 million to the likes of Vargas, Infante, Byrd, and Chooch Ruiz.