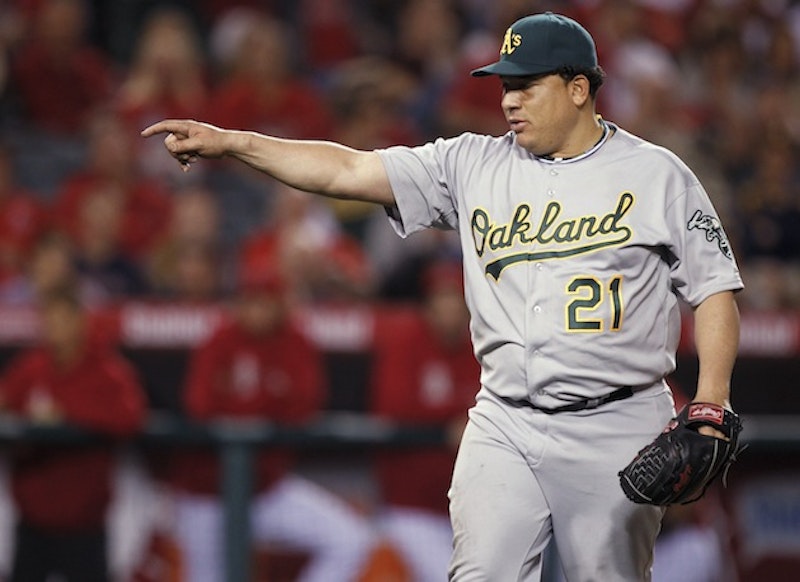 The Baltimore Orioles have been linked to nearly every free agent not named Robinson Cano this offseason. While the likes of Matt Garza or the presumably soon-to-be posted Masahiro Tanaka would give Baltimore a much needed top of the rotation starter, everyone with a cursory knowledge of the O’s understands that the team won’t commit the years or dollars required to sign a pitcher of that ilk. Instead Orioles fans are left to agonize over the rumors of a potential Jason Hammel return or Chad Gaudin signing. One free agent pitcher that could front Baltimore’s rotation and come at a reduced cost is former Athletic Bartolo Colon.

Colon has experienced a curious late career resurgence, or perhaps not-so-curious considering his 50 game suspension in 2012 for testing positive for PEDs. The former Cy Young winner and three-time All Star missed much of the 2008 and 2009 seasons and all of 2010 re-emerging with the Yankees in 2011. Colon’s surprising 2011 season was his first effective and healthy season since 2005. He moved on to Oakland in 2012 and posted two excellent seasons, going a combined 28-15 with a 2.99 ERA in 54 starts. Colon has greatly improved his control and averaged just 1.4 walks per nine innings in Oakland after averaging 3.7 walks per nine in his six years in Cleveland. Colon’s advanced age, he’ll turn 41 in May, and checkered injury and PED history will scare off many potential suitors.

In the Orioles’ case beggars can’t be choosers. If owner Peter Angelos isn’t going to allow the front office to commit multiple years and tens of millions to sign a pitcher close to the prime of his career, then Dan Duquette and company must get creative. No one really knows what kind of artificial budgetary constraints the Orioles are operating under but with names like Hammel and Gaudin floated it’s clear that a big-time starter is not in the O’s budget. Colon on a short-term deal could be just the solution.

Colon is likely seeking a two-year deal, though he might settle for one year. Baltimore could offer a one-year deal with an option for a second year that could keep Colon in orange and black through the 2015 season. Oakland didn’t make Colon a qualifying offer meaning that he won’t cost his new club a first round pick, an attractive proposition for the O’s. Colon would provide an anchor at the front of the rotation and be a mentor to Baltimore’s young starters; notably Chris Tillman, Kevin Gausman and Dylan Bundy.

I’ve said repeatedly that the Orioles next ace will be homegrown and come from the Bundy/Gausman/Eduardo Rodriguez trio. Drafting and developing young talent is always the best path to sustained success. Colon isn’t the perfect answer to Baltimore’s problems, but he’ll do. The O’s should save their money and stop talking to Hammel, Gaudin, and the injured Gavin Floyd. Signing Colon could be the best solution, both long-term and short-term, for Baltimore because he’d provide a reliable starter with American League experience, and wouldn’t tie up a rotation spot that could soon be earmarked for one of the young hurlers mentioned above.