Mariusz Pudzianowski goes out with a bang. 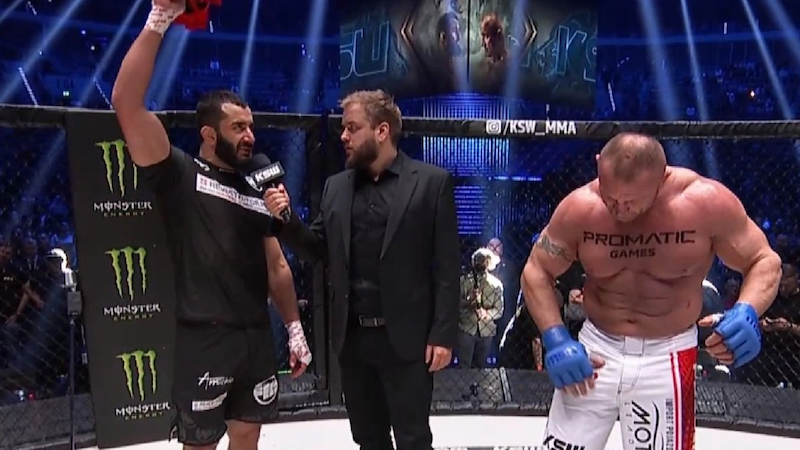 Mariusz “Pudzian” Pudzianowski—about whose Konfrontacja Sztuk Walki (“Martial Arts Confrontation”) exploits I had waxed poetic around the middle of the year—ended 2022 on the ground, absorbing punches from the much smaller Mamed Khalidov.

Khalidov, a 42-year-old Chechen fighter who’s been both KSW Middleweight Champion and KSW Light Heavyweight Champion, tipped the scales at 206 pounds for his bout against Pudzianowski, who officially outweighed him by 53 pounds but might as well have outweighed him by a million given the bizarro size disparity between the two men. The skill disparity was equally significant, though: Khalidov can beat pretty good fighters, like Matt Lindland and Melvin Manhoef, and only a confirmed killer like ONE Championship’s Roberto Soldić has finished him with strikes in the past 15 years.

Pudzianowski’s late-career run, a “gray streak” of sorts, contained everything I wanted from MMA, with wins coming against overmatched and underweight veterans, freak-show opponents like Senegalese bruiser Serigne Ousmane Dia, and even an easy victory over fitness influencer Erko Jun, who exhibited a lot less pugilistic derring-do than Million Dollar Extreme’s Sam Hyde. The run had to end, as everything does, and it was fitting that it ended at the hands of Khalidov, a Chechen refugee to Poland who has become skilled in all the constituent disciplines of MMA.

There was a moment, about 30 seconds into the mercifully brief fight, when Pudzianowski grabbed underhooks against Khalidov and drove him toward the cage. If the big man was going to win, this would be how he did it: early in the first round and through the application of irresistible force. Unfortunately, Khalidov—who cut his teeth in combat sambo, among other martial arts—had little trouble leveraging an overhook throw to put his stronger, less coordinated opponent on the mat. Pudzianowski quickly fought back up, but Khalidov had identified the easiest path to victory: this big, lumbering guy had nothing for him in terms of grappling.

Back on his feet, Pudzianowski remained in Khalidov’s grasp—one meaty arm overhooked, the other underhooked. Khalidov executed another throw, then slowly forced his way onto Pudzianowski’s back, whereupon he rained down punches until the five-time World’s Strongest Man tapped the mat for relief. It was a short night for Khalidov, the 36th win in a workmanlike 46-fight career, and it gave the Polish crowd a bit of excitement even as it surely sent many of them home unhappy.

Most know by now that Pudzianowski is hardly a guaranteed victory. He’s an interesting character—a freak-show great who evolved into something slightly more substantial—but merely serviceable fighters such as Karol Bedorf and Sean McCorkle (who never got his trilogy fight, despite being robbed by the judges in their second meeting) have had their way with him. Even Szymon Kołecki, better known as a silver medalist Olympic weightlifter, polished off Pudzianowski in a single round.

Still, I hated to witness the big man “taking the L.” There is nothing sadder, a friend remarked, than seeing a strongman whose life revolves around that signature strength being immobilized and pulverized—nothing, that is, except seeing such a man forcibly retired from the strength game by a career-ending injury. Pudzianowski is thrilling in victory, pathetic in defeat. It’s not by choice; he took that beating from Khalidov like a man, but he also took it like the World’s Strongest Man, and that’s a hard thing to watch.

Pudzianowski likely isn’t finished with these main-event bouts. He’s a major draw for KSW regardless of his record, and there will be plenty of inexperienced beefcakes and behemoths willing to tangle with him on short notice. He connects past with present in a way few other athletes can: not just the era of freak-show fights, which has largely come to an end outside of promotions like KSW and Rizin, but those lazy weekend mornings in the 1990s when repeat episodes of his World’s Strongest Man triumphs were broadcast on a seemingly endless loop on ESPN2. My siblings and I would watch these shows in a sleep-deprived haze, never aware that this was both as bad and as good as Generation X’s brief contribution to popular culture would get.

For the year in fights to end like this came as a warning to those of us who have overstayed our welcome yet refuse to leave the stage. This is no more my epoch than it is Pudzianowski’s; the contemporary culture, sporting or otherwise, has no memory of the world before 2012 and little recollection of it before 2016. Pudzianowski fought for money, with an unmissable advertisement for “Bafra Kebab” contained inside a white diamond painted on his back and “Promatic Games” emblazoned in all capital letters on his chest, but he also fought for the past against the unfailing repetition of this perpetual (and perpetually tense) present. Of course he lost; of course he did. Out of time, the descent of his end fell equally upon the online and the logged-off.