The Life and Times of Tom Cannon

Born in 1852, the stocky Mancunian was very nearly the best wrestler of his era. 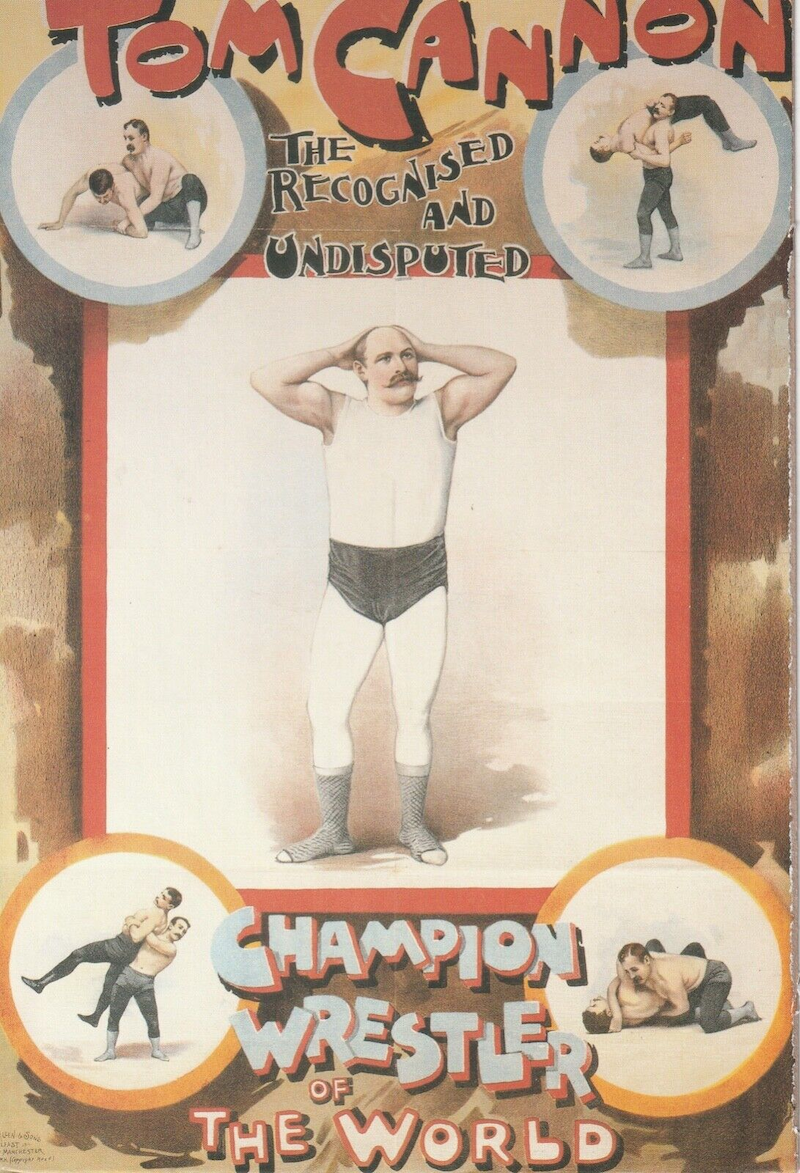 Tom Cannon was born in Tyldesley, Lancashire on April 19, 1852. Tyldesley is a town in the Metropolitan Borough of Wiganin Greater Manchester, England—an appropriate point of origin for one of the first great English wrestlers, given the many fine wrestlers who would later be trained in the catch-as-catch can style at Billy Riley’s Snake Pit gym in Wigan.

Cannon, whose wrestling prime would come in the late-1880s, was an imposing specimen for his era. He grew to a billed height of 5’10” at a time when the average height of British men was 5’5”. He weighed anywhere from 175 to 220 pounds, with most of that weight carried in his barrel-shaped torso. He led an itinerant adolescence, wandering the British countryside and learning different styles of wrestling at a time when seemingly every region of that country had its own approach to grappling. His great upper body strength made him a natural for the Greco-Roman style, which was built around upper-body throws and clinches.

In the early-1880s, Cannon traveled to America for additional seasoning as a wrestler. Contemporary records indicate that he lost many of his matches in the former British colony, dropping bouts to the likes of Clarence Whistle, Edwin Biddy, and Duncan Ross.

Detailed accounts exist of Cannon’s stateside matches with Joe Acton at Sportsman Park in New Orleans, Louisiana in March 1885 and a wrestler named Moth in Minneapolis in December 1885. In his bout with Acton, Cannon—then said to be a specialist in the back-and-side-hold style of wrestling—defeated his foe in a match contested under those rules, then lost matches contested under catch-as-catch-can and Greco-Roman rules, respectively. The match with Moth, said to be a rematch of one that Cannon had lost earlier in the year, was a single-fall affair marked by a furious interchange of holds, culminating with Moth getting the win after he turned Cannon onto his back using a half-nelson and armlock combination.

These accounts give some clues as to Cannon’s grappling style and general disposition. He was said to be a big man who relied on upper body holds and brute strength. He also had a sturdy defense, able to protect himself during chain wrestling exchanges and bridge for extended periods of time to avoid taking the fall. In his rematch against Moth, he vociferously protested the result and criticized the referee, indicating that he was unafraid to advocate for himself.

His weaknesses flowed naturally from his strengths. In both accounts, Cannon’s described as the bigger man, and he struggled to keep pace with smaller opponents. While he had tremendous pushing power—hence his proficiency in the back-and-side-hold style—he struggled when opponents went for his legs and doesn’t appear to have been as flexible as the smaller men of the day.

By 1886, Cannon had ironed out many of his stylistic deficiencies and begun focusing almost exclusively on Greco-Roman bouts, which played to his strengths. That year, Cannon defeated Tom McLernery and Professor William Miller, staking a claim to being the first “World Greco-Roman Champion” after the latter match.

As with many titles in the combat sports of the 19th century, the provenance and legitimacy of the “World Greco-Roman Championship” is difficult to ascertain. However, Cannon proved his mettle against challengers throughout Europe. When he traveled through the United States during this period, he was billed as the “British Champion.”

According to some accounts, Cannon became the “Unified World Catch-as-Catch-Can Champion” in 1888 by defeating “Ed” Lewis—surely this is intended to mean Evan “Strangler” Lewis, Ed’s predecessor in chokehold glory—but other accounts indicate that Lewis beat Cannon soundly both before and after that 1888 match. In any event, Cannon is said to have dropped this unified title (or some version thereof) in 1891 to the notable European grappler Carl Abs—perhaps the best continental wrestler of the 1880s—then tramped around for a while before winning back the now-vacant unified title in May 1901 in a match in London against Antonio Pierre.

By 1901, Cannon was nearing 40 and stout in the waist, perhaps even heavier than 220 pounds (although, in fairness, he could’vebeen lighter than he looked, given that his signature Big Daddy-esque “British Yeoman” barrel torso was complemented by stereotypically thin arms and legs). His day had passed, and younger stars, such as Stanislaus Zbyszko and George Hackenschmidt, were burnishing their reputations on the continent. In September 1902, the 40-year-old “recognized and undisputed champion of the world”—at least per his marquee billing—would lose decisively to the rising Hackenschmidt, a young Estonian with a magnificent physique decades ahead of its time.

From there, Cannon receded into the mists of grappling history. Accounts exist of him wrestling in Ireland in 1908, but the date of his death is unknown. For a time, it was listed on Wikipedia as 1968, but that was an error that had to be amended, as Cannon didn’t live to a ripe old age of 116 years.

What can be said about Cannon is this: he was ferociously strong, adept in several styles of wrestling, and large by the standards of the sport’s formative period. This pioneering Mancunian competed against the best of the best, defeating some and losing to others, and had a legitimate claim to the lineal heavyweight championship later held by the likes of George Hackenschmidt and Frank Gotch. Though the historical record consists of nothing save what I recounted here, Cannon did enough to win admission to the International Pro Wrestling Hall of Fame in 2022.